The largest earthquake ever recorded by instruments hit southern Chile at 19:11 UTC on May 22, 1960. It was a 9.5 magnitude earthquake with a focal depth of 33 km (20.5 miles), preceded by 4 aftershocks bigger than M7.0, including M7.9 on May 21 that caused severe damage in the Conception area.

​The rupture zone of this earthquake, known as the 1960 Valdivia earthquake or Great Chilean earthquake, is estimated to be about 1 000 km long (621 miles), from Lebu to Puerto Aisen.

Many aftershocks occurred, with 5 of M7.0 or greater through November 1.

"Like a spring, the lower slopes of the South American continent offshore snapped upwards as much as 6 m (20 feet) while land along the Chile coast dropped about 3 m. This change in the shape of the ocean bottom changed the shape of the sea surface. Since the sea surface likes to be flat, the pile of excess water at the surface collapsed to create a series of waves – the tsunami," Dr. Gerard Fryer, Hawaii Institute of Geophysics & Planetology, explains.

Severe damage from shaking occurred in the Valdivia – Puerto Montt area. Most of the casualties and much of the damage was because of large tsunamis which caused damage along the coast of Chile from Lebu to Puerto Aisen and in many areas of the Pacific Ocean. 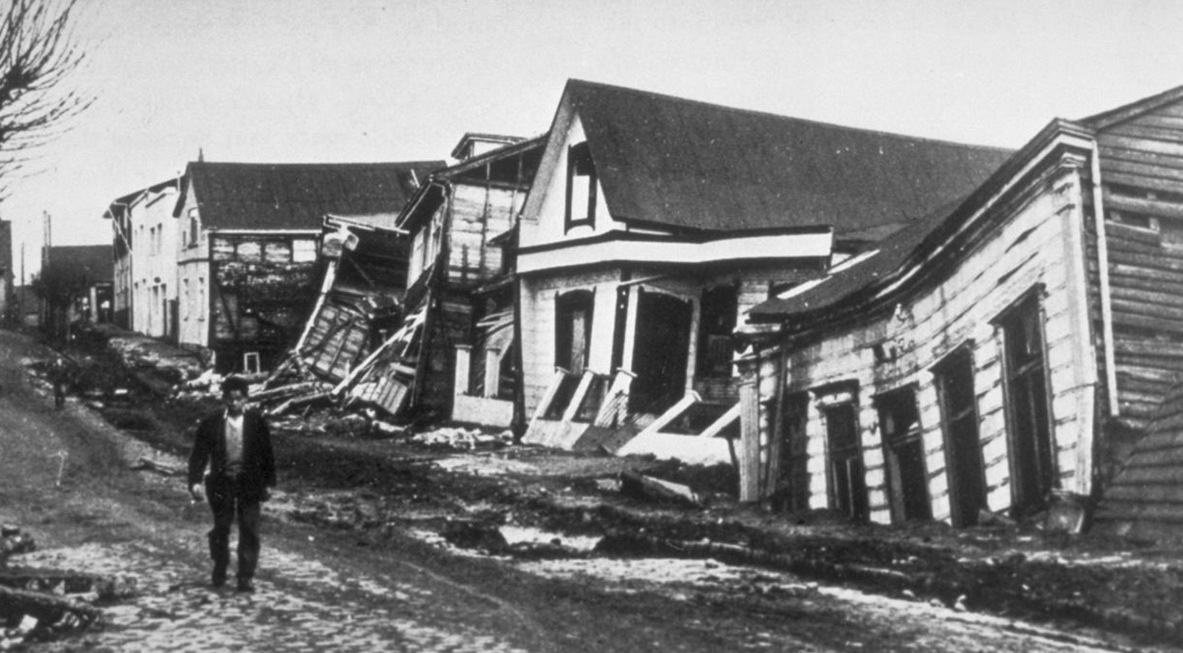 Puerto Saavedra was completely destroyed by waves which reached heights of 11.5 m (38 feet) and carried remains of houses inland as much as 3 km (2 miles). Wave heights of 8 m (26 feet) caused much damage at Corral. 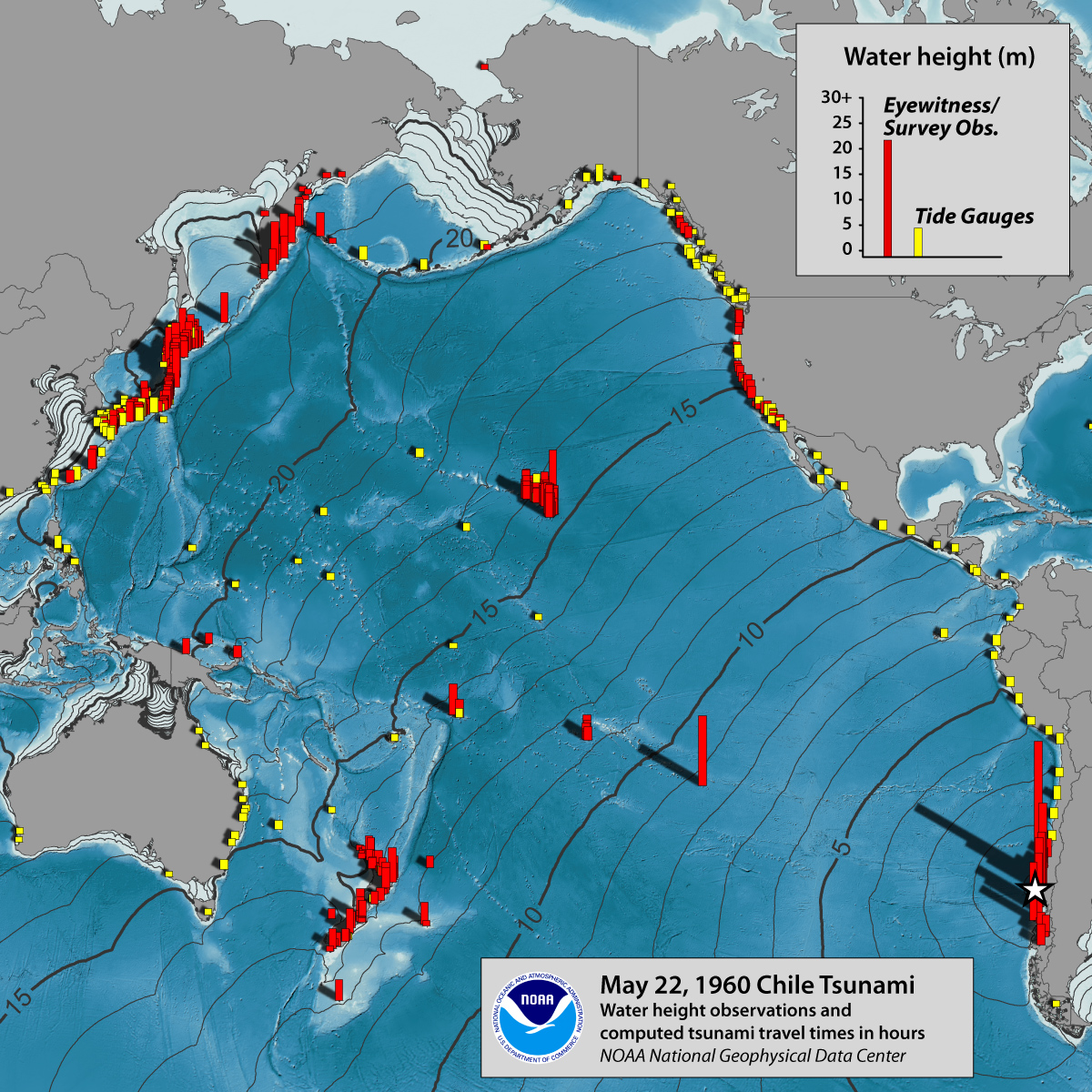 It changed into a bore as it passed the harbor entrance and advanced on to the bay front. The business district along Kamehameha Avenue and the adjoining low-lying residential areas of Waiakea and Shimmache were destroyed. Damage to property included 229 dwellings and 308 business and public buildings. (NGDC) Between the Wailoa and Wailuku Rivers, the water washed inland as far as the 6 m (20 feet) contour above sea level.

Waves as high as 5.5 m (18 feet) struck northern Honshu, Japan about 1 day after the quake, where it destroyed more than 1 600 homes and left 185 people dead or missing.

Another 32 people were dead or missing in the Philippines. Damage also occurred on Easter Island, in the Samoa Islands and in California.

A seiche of more than 1 was observed on Panguipulli Lake, southern Chile following the earthquake. Another seiche occured on May 22 in Nahuel Huapi Lake, on the Argentinean side of the Andes, more than 200 km (124 miles) away from Valdivia. The wave killed two people and destroyed a pier in San Carlos de Bariloche city.

One to 1.5 m (3 – 5 feet) of subsidence occurred along the Chilean coast from the south end of the Arauco Peninsula to Quellon on Chiloe Island. As much of 3 m (10 feet) of uplift occurred on Isla Guafo.

Many landslides occurred in the Chilean Lake District from Lago Villarica to Lago Todos los Santos.

Second, the speed of a tsunami does not depend on the size of the earthquake. All three tsunamis move at about the same speed regardless of their size because their waves are so large that they interact with the sea floor. Therefore, both the ocean depth and its local variations control the speed of the tsunami waves.

On May 24, Puyehue – Cordon Caulle volcano, located 300 km SE of the epicenter, entered a new eruptive phase which lasted for several weeks (VEI 3). The eruption fed a 5.5 km long and N135° trending fissure where 21 individual vents have been found. These vents produced an output of about 0.25 km3 DRE both in form of lava flows and tephra.

The eruption lasted until the end of June. 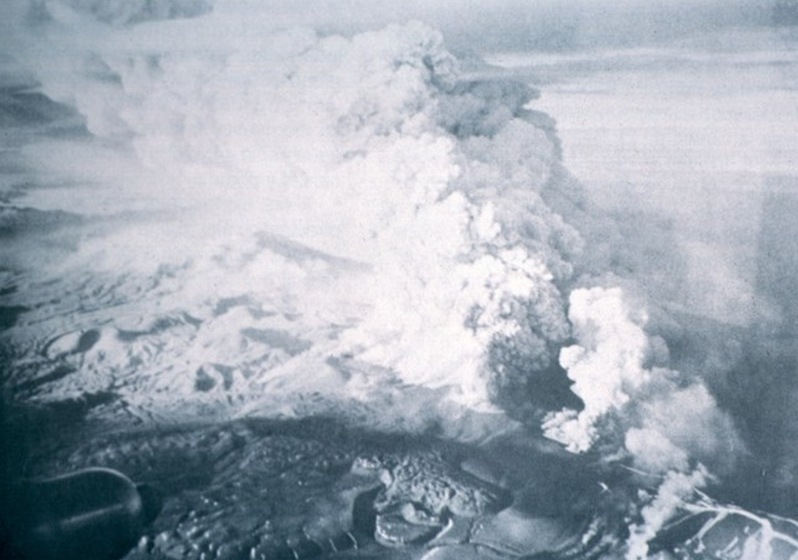 Ash-laden eruption plumes rise above a fissure vent at Cordón Caulle volcano on May 24, 1960. Photo by Oscar González-Ferrán, 1960 (University of Chile).