Today's update on the El Niño–Southern Oscillation (ENSO) by Australian Bureau of Meteorology confirms El Niño thresholds have been reached in the tropical Pacific for the first time since March 2010.

Assistant Director for Climate Information Services, Mr Neil Plummer, said El Niño is often associated with below average rainfall across eastern Australia in the second half of the year, and warmer than average daytime temperatures over the southern half of the country.

“The onset of El Niño in Australia in 2015 is a little earlier than usual. Typically El Niño events commence between June and November,” Mr Plummer said.

“Prolonged El Niño-like conditions have meant that some areas are more vulnerable to the impact of warmer temperatures and drier conditions.

“The failed northern wet season in 2012–13, compounded by poor wet seasons in 2013-14 and 2014-15, have contributed to drought in parts of inland Queensland and northern New South Wales,” he said. 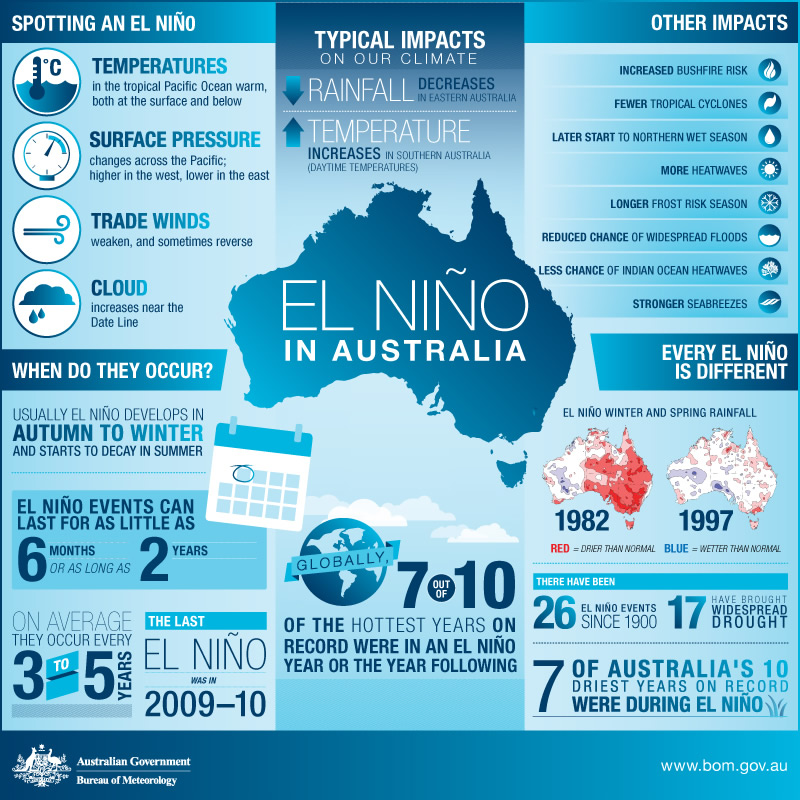 While El Niño increases the risk of drought, it does not guarantee it; of the 26 El Niño events since 1900, 17 have resulted in widespread drought.

Despite El Niño increasing the likelihood of drier conditions later this year, the Bureau’s May to July Climate Outlook indicates much of Australia is likely to be wetter than average.

This is being driven by warmer than average Indian Ocean sea surface temperatures, which are dominating this outlook.