Results from a recent field campaign, which was organised to help investigate the potential of a new Earth observation mission concept, have provided a unique 3D glimpse of the peaks and troughs under the Mittelbergferner glacier in the Austrian Alps, ESA reports today.

The campaign, with the somewhat unwieldy name of AlpTomoSAR, supports the development of the Saocom Companion Satellite (Saocom-CS) mission. This new concept was made available thanks to collaboration with Argentina and is based on making 3D observations from space using two radar satellites in tandem.

Following an offer from the Argentinian space agency, Conae, it is one of first ‘small satellite’ concepts to be studied by ESA. The idea is to build a companion satellite for Conae’s Saocom-1b, which is envisaged for launch in 2018–19 and use the satellites together.

Saocom-1b will carry an L-band synthetic aperture radar. Saocom-CS would fly in formation with Saocom-1b, capturing its radar echoes as they are reflected from Earth’s surface.

If flown, it would allow the science community to explore new applications, ranging from improved 3D maps of boreal forests, through to 3D maps of surface deformation.

The airborne campaign took place in March 2014 and was designed specifically to test how these new measurement techniques could be used to map the internal structures of mountain glaciers and ice caps such as those that overlie Greenland and Antarctica.

The flights took place over the Mittelbergferner glacier in the Austrian Alps and used an innovative airborne radar system built by MetaSensing BV in the Netherlands carried on an aircraft operated by CGR SpA. 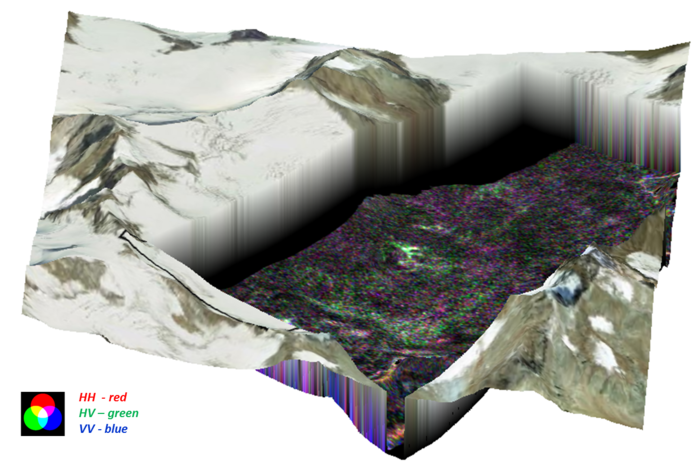 Results from the AlpTomoSAR field campaign in Austria reveal mountains 50 m below the Mittelbergferner glacier surface. The campaign supports the development of a potential new satellite called Saocom-CS. If implemented, the mission would allow the science community to explore new applications, ranging from improved 3D maps of boreal forests, through to 3D maps of surface deformation.  Copyright: Polimi.

By repeatedly flying over the glacier, around 40 times in total, unique 3D measurements of the ice surface and interior could be obtained using a technique called tomography.

During the flights, teams from the Austrian ENVEO engineering company and scientists from the University of Heidelberg in Germany were out on the glacier taking readings of the snow and ice as well as collecting valuable information about the interior of the glacier using ground-penetrating radar.

Owing to the complicated processing techniques involved, the results have only recently become apparent, but appear to be well worth the wait.

The results from the campaign will continue to be studied by the AlpTomoSAR science team and flow into the design of Saocom-CS mission. A decision whether or not to build the satellite mission is expected in early 2016.