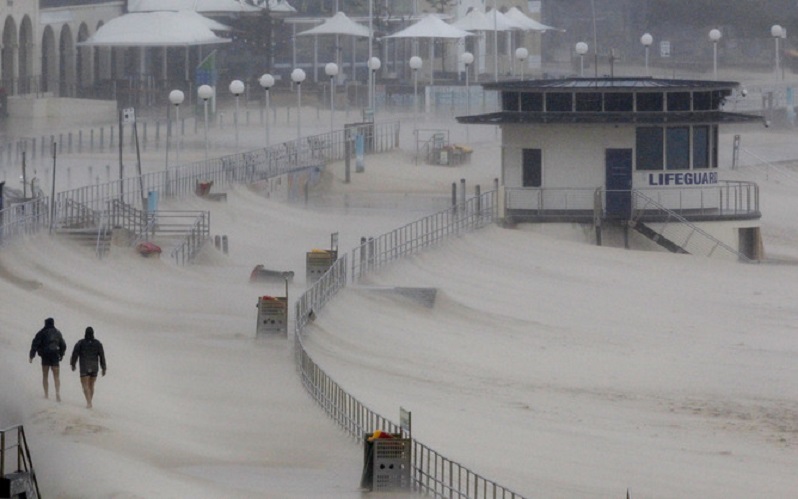 Over the past 24 hours, the Sydney, Central Coast, and Hunter regions of New South Wales have experienced very heavy rain, gale-force winds with gusts over 100 km per hour, and waves of more than 10 m in height.

For Sydney it was the wettest single day since February 2002, with 119.4 mm of rain recorded in the 24 hours to 9 am on April 21. Meanwhile, Tocal in the Hunter Valley recorded more than 100 mm in a single hour. Sadly, three deaths have been reported from flash flooding at Dungog.

So, what’s causing all this rain?

The lowdown on lows

In weather jargon, the words “cyclone” or “low” refer to an area where the pressure is lower than everywhere around it.

These can come in many forms – the most well-known are tropical cyclones, which develop where sea surface temperatures are warmer than 26.5C.

However, so-called “extra-tropical cyclones” are a frequent visitor to mid-latitudes around the world. Wherever they are, the strong pressure gradients and convergence of air in the centre can lead to strong winds, large waves, and heavy rainfall.

“East Coast Low” or “East Coast Cyclone” are terms we use for low-pressure systems that develop off the east coast of Australia, generally between Brisbane and eastern Victoria.

This area can experience several different types of low-pressure systems, including those that are formed from the remains of tropical cyclones that have moved southwards (such as Oswald in January 2013) and large extra-tropical cyclones (such as the one that hit the Sydney-Hobart yacht race in December 1998) that form in the storm tracks to the south of the Australian mainland and move to positions off the east coast.

The classic East Coast Low often develops rapidly in surface troughs off the east coast, which is exactly what we saw this week. These lows are one of the hardest challenges for forecasters, as weather forecasting models can find it hard to decide exactly where these lows will form.

All three of these systems have different origins and they are very different synoptic systems, but have all been considered “East Coast Lows” in at least one paper, making the frequency of East Coast Lows depend largely on who you speak to.

Is this a freak storm?

In 2009, a group at the Bureau of Meteorology painstakingly searched every synoptic chart between 1970 and 2006, looking for all low-pressure systems along the east coast. They identified about 22 East Coast Lows each year. About seven of these each year caused widespread rainfall totals above 25 mm.

While lows are most common between May and August, they can occur at any time of year, with about every second April having a low that meets this 25-mm rainfall benchmark.

To some extent, it’s only the East Coast Lows that cause severe weather around the Sydney region that spark national interest. For example, two weeks ago a low caused heavy rain and strong winds along the south coast. A rapidly developing but short-lived East Coast Low also produced more than 100 mm of rain in Sydney over the 24 hours to 9 am on March 8, 2012, including 42.4 mm during the morning peak hour, causing widespread flash flooding.

Looking further back, many of the most severe weather events in Sydney and coastal NSW can be considered East Coast Lows. Several years ago we found that 60% of all major dam-filling events in Sydney catchments can be attributed to East Coast Lows, with several East Coast Lows in June 2007 causing dam levels in Warragamba to increase by 14%, undoing more than four years of storage declines. The wettest day on record for Sydney, on August 6, 1986, was also an East Coast Low, which caused an incredible 328 mm of rain over 24 hours.

The East Coast Low this week has caused widespread severe weather and damage. Impacts in the Hunter Valley, while severe, appear at this point similar in magnitude to the East Coast Low in June 2007, which caused major flooding and nine deaths in the Hunter as well as causing a 76,000 tonne ship (the Pasha Bulker) to become beached at Nobbys Head.

There have been numerous other severe East Coast Lows in the historical record, with an East Coast Low in May 1974 also causing the shipwreck of the MV Sygna on Stockton beach, north of Newcastle.

At Sydney, the 24 hour total to 9 am on the 21st is the wettest individual day in more than 10 years. However, there have been more than 60 wetter days in Sydney since records began in 1858, including an incredible 328 mm during an East Coast Low on August 6, 1986.

This latest East Coast Low is a severe event, but not a record. In fact, Sydney experiences rainfall above 100 mm almost once a year on average, so this is a normal feature of our climate.

And before you ask, is climate change to blame?

The difficulty in deciding on exactly what separates an East Coast Low from other systems, the very large year to year variability in their frequency, as well as large inconsistencies in the East Coast Lows identified when we use different data sources and computer methods, make this a very difficult question to answer.

However, recent research is suggesting that the frequency of East Coast Lows, particularly the major winter systems that cause large waves, may actually decrease over the coming century given current climate projections.

​Source: The Conversation (This article is based on a blog post written by Acacia Pepler)