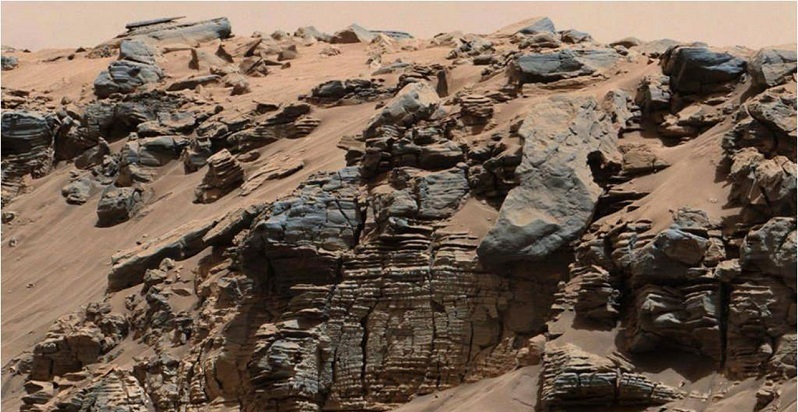 Researchers have long known that there was water in the form of ice on Mars. Now, new research from NASA’s Mars rover Curiosity shows that it is possible that there is liquid water close to the surface of Mars. The explanation is that the substance perchlorate has been found in the soil, which lowers the freezing point so the water does not freeze into ice, but is liquid and present in very salty salt water – a brine. The results are published in the scientific journal Nature.

In August 2012, the Mars rover Curiosity landed on Mars in the large crater, Gale, located just south of the equator. The giant crater is 154 kilometers in diameter and the rim of the crater is almost 5 kilometers high. In the middle of the crater lies the mountain, Mount Sharp. In over 2½ years, Curiosity has traveled approximately 10 km from the landing site towards Mount Sharp and has carried out many studies along the way. 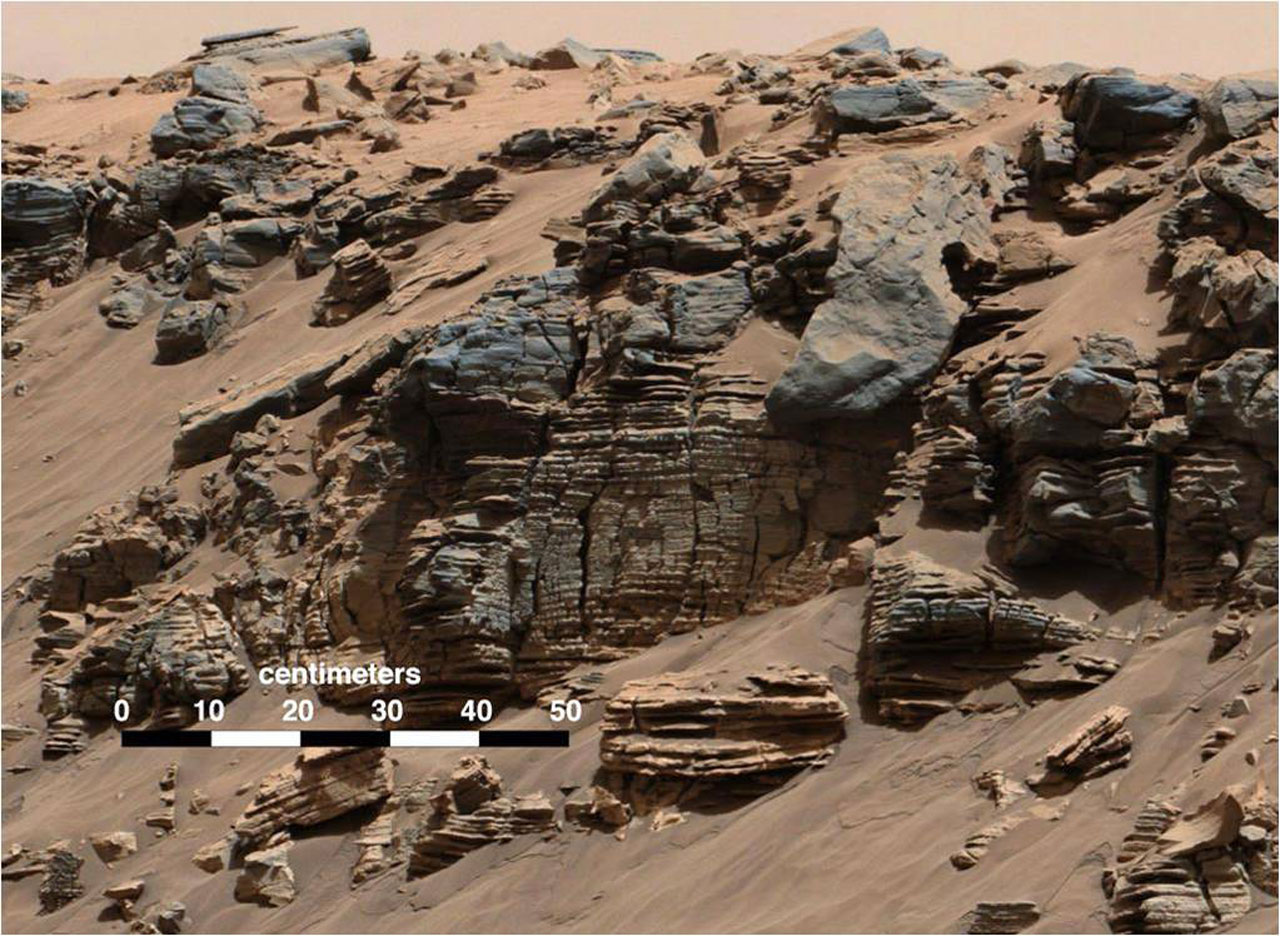 The image is from ‘Hidden Valley’ in Gale Crater on Mars. Very fine-grained sediments, which slowly fell down through the water, were deposited right at the bottom of the crater lake. The sediment plates at the bottom are level, so everything indicates that the entire Gale Crater may have been a large lake. (Credit: NASA/JPL, MSSS)

“We have discovered the substance calcium perchlorate in the soil and, under the right conditions, it absorbs water vapour from the atmosphere. Our measurements from the Curiosity rover’s weather monitoring station show that these conditions exist at night and just after sunrise in the winter. Based on measurements of humidity and the temperature at a height of 1.6 meters and at the surface of the planet, we can estimate the amount of water that is absorbed. When night falls, some of the water vapour in the atmosphere condenses on the planet surface as frost, but calcium perchlorate is very absorbent and it forms a brine with the water, so the freezing point is lowered and the frost can turn into a liquid. The soil is porous, so what we are seeing is that the water seeps down through the soil. Over time, other salts may also dissolve in the soil and now that they are liquid, they can move and precipitate elsewhere under the surface,” explains Morten Bo Madsen, associate professor and head of the Mars Group at the Niels Bohr Institute at the University of Copenhagen.

The researchers believe that Gale Crater was a large lake between 3.5 and 2.7 billion years ago. Mount Sharp, which is now an approximately five kilometer tall mountain in the middle of the crater, was probably formed by deposits from the crater and the surrounding area. (Credit: NASA/JPL/Caltech/ESA/DLR/MSSS)

Observations by the Mars probe’s stereo camera have previously shown areas characteristic of old riverbed with rounded pepples that clearly show that a long time ago there was flowing, running water with a depth of up to one meter. Now the new close-up images taken by the rover all the way en route to Mount Sharp show that there are expanses of sedimentary deposits, lying as ‘plates’ one above the other and leaning a bit toward Mount Sharp.

“These kind of deposits are formed when large amounts of water flow down the slopes of the crater and these streams of water meet the stagnant water in the form of a lake. When the stream meets the surface, the solid material carried by the stream falls down and is deposited in the lake just at the lakeshore. Gradually, a slightly inclined slope is built up just below the surface of the water and traces of such slanting deposits were found during the entire trip to Mount Sharp. Very fine-grained sediments, which slowly fell down through the water, were deposited right at the very bottom of the crater lake. The sediment plates on the bottom are level, so everything indicates that the entire Gale Crater may have been a large lake,” explains Morten Bo Madsen.

The red line on the left shows the sunrise and the right is the sunset. When night falls, some of the water vapour in the atmosphere condenses on the planetary surface as frost, but perchlorates are very absorbent and it forms a brine, which is liquid. The light blue dots show when a brine with calcium perchlorate is liquid at the surface and the dark blue dots show when it is liquid five centimeters below the surface. (Credit: Javier Martin-Torres et al.)

He explains that about 4.5 billion years ago, Mars had 6½ times as much water as it does now and a thicker atmosphere. But most of this water has disappeared out into space and the reason is that Mars no longer has global magnetic fields, which we have on Earth.

Even though liquid water has now been found, it is not likely that life will be found on Mars – it is too dry, too cold and the cosmic radiation is so powerful that it penetrates at least one meter into the surface and kills all life – at least life as we know it on Earth.

Featured image: The image is from ‘Hidden Valley’ in Gale Crater on Mars. Very fine-grained sediments, which slowly fell down through the water, were deposited right at the bottom of the crater lake. The sediment plates at the bottom are level, so everything indicates that the entire Gale Crater may have been a large lake. (Credit: NASA/JPL, MSSS)