The storm changed course at the last minute and hit the capital Port Vila harder than expected.

Pam caused widespread devastation, cut power and communications, but the full extent of the damage is still not know. It is known, however, that Pam is the strongest storm to make landfall since the devastating Super Typhoon "Haiyan" which hit the Philippines in 2013.

The UN office for the co-ordination of humanitarian affairs (UNOCHA) said today it was checking an unconfirmed report of 44 dead in northeastern Penama province.

"While it is too early to say for certain, early reports are indicating that this weather disaster could potentially be one of the worst in Pacific history," UNICEF New Zealand's executive director Vivien Maidaborn said.

Alice Clements, spokeswoman for the UNICEF, described the cyclone as 15-30 minutes of absolute terror for everybody in this country as it passed over. 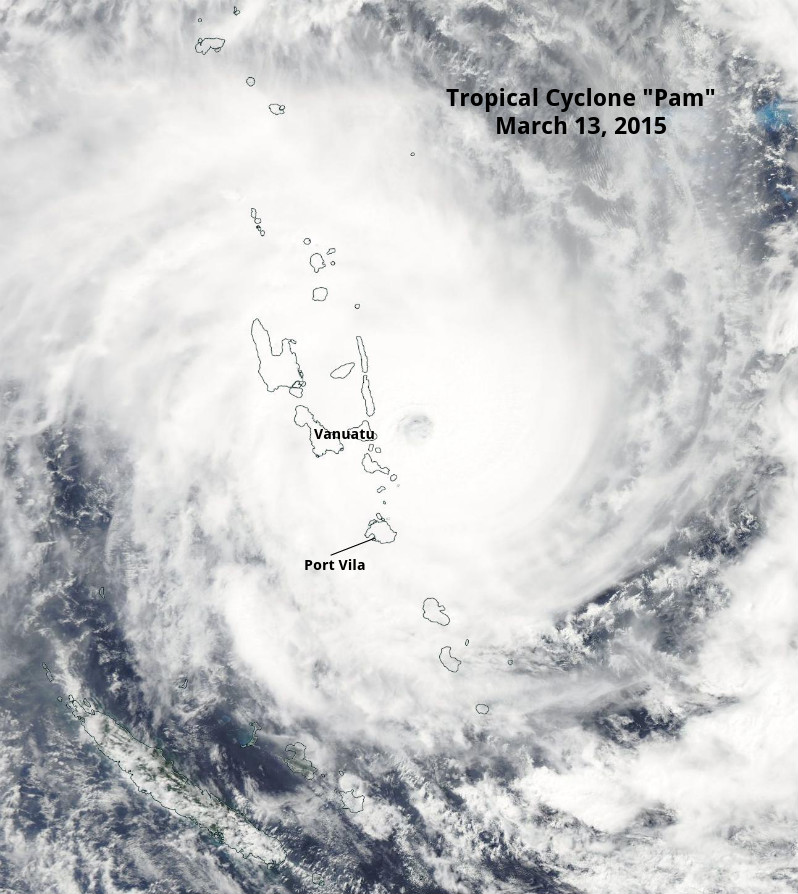 "Homes have been blown to pieces, and even evacuation shelters, where people had sought refuge, have been flooded and left exposed to Cyclone Pam. If this is the level of impact in communities where emergency shelters were an option, we are deeply concerned about what has happened in remote communities without them," Added Care International's Charlie Damon said.

The regional head of UNOCHA, Sune Gudnitz, said Vanuatu is a very vulnerable place because of its location in the middle of the ocean. It is possible that there will be a death toll that could be high. I can't give any numbers. I think it is a well-grounded fear.

Strong  winds of 60 km/h (37.2 mph) will continue to affect Shefa province, but will gradually ease as the system continues to moves south southeastwards.

Very rough seas with heavy swells will continue to affect all waters of Vanuatu. Heavy rainfall and flooding is expected throughout the central and southern islands. Coastal flooding over coastal areas in Southern Vanuatu is also expected.

​Fiji Weather Service said the cyclone was weakening as it slowly moved away from Vanuatu, and would pass between Fiji and New Caledonia before brushing the North Island of New Zealand on Monday, March 16.