NASA's Dawn spacecraft has reached dwarf planet Ceres and achieved orbit around it on Friday, March 6, 2015. Dawn was approximately 61 000 km (38 000 miles) away from Ceres when it was captured by its gravity at about 12:39 UTC.

Mission controllers at NASA’s Jet Propulsion Laboratory (JPL) received a signal from the spacecraft at 13:36 UTC that Dawn was healthy and thrusting with its ion engine, the indicator Dawn had entered orbit as planned.

"Since its discovery in 1801, Ceres was known as a planet, then an asteroid and later a dwarf planet," said Marc Rayman, Dawn chief engineer and mission director at JPL. "Now, after a journey of 4.9 billion km (3.1 billion miles) and 7.5 years, Dawn calls Ceres, home."

From 2011 to 2012, the spacecraft explored the giant asteroid Vesta, delivering new insights and thousands of images from that distant world. Ceres and Vesta are the two most massive residents of our solar system’s main asteroid belt between Mars and Jupiter.

"Both Vesta and Ceres were on their way to becoming planets, but their development was interrupted by the gravity of Jupiter," said Carol Raymond, Dawn deputy principal investigator at JPL. "These two bodies are like fossils from the dawn of the solar system, and they shed light on its origins."

Ceres and Vesta have several important differences. Ceres is the most massive body in the asteroid belt, with an average diameter of 950 km (590 miles). Vesta has an average diameter of 525 km (326 miles), and is the second most massive body in the belt. The asteroid formed earlier than Ceres and is a very dry body. Ceres, in contrast, is estimated to be 25 percent water by mass.

The most recent images received from the spacecraft, taken on March 1 show Ceres as a crescent, mostly in shadow because the spacecraft's trajectory put it on a side of Ceres that faces away from the sun until mid-April. When Dawn emerges from Ceres' dark side, it will deliver ever-sharper images as it spirals to lower orbits around the planet. 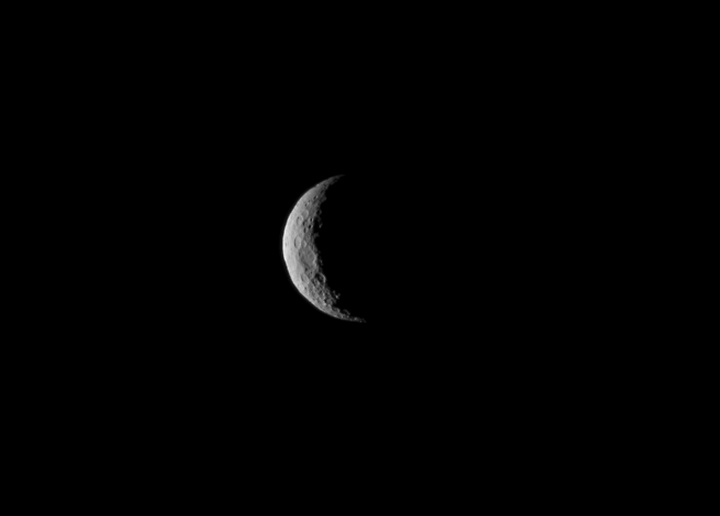 Ceres is seen from NASA's Dawn spacecraft on March 1, just a few days before the mission achieved orbit around the previously unexplored dwarf planet. The image was taken at a distance of about 30,000 miles (about 48,000 kilometers). Image credit: NASA/JPL-Caltech/UCLA/MPS/DLR/IDA

Recent images show numerous craters and unusual bright spots that scientists believe tell how Ceres, the first object discovered in our solar system's asteroid belt, formed and whether its surface is changing.

An unusually large basin nearly 300 km (186 miles) across is seen just south of the equator, with a shallow interior, faint rim and low-relief mounds within. Several bright spots are seen, including two that are very bright and lie within a single crater north of the equator.

The bright spot in the center of that crater is too small to be resolved at this distance, so its true brightness is not yet known. 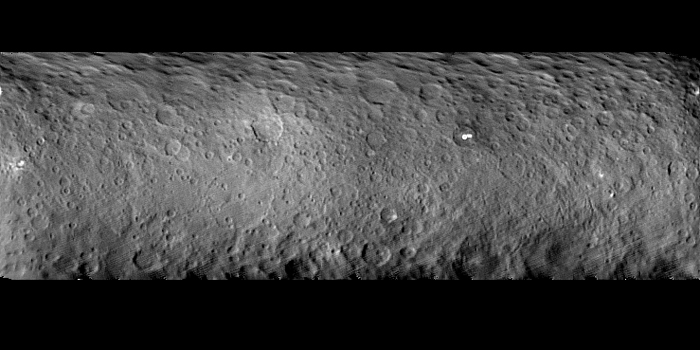 "We feel exhilarated," said Chris Russell, principal investigator of the Dawn mission at the University of California, Los Angeles (UCLA). "We have much to do over the next year and a half, but we are now on station with ample reserves, and a robust plan to obtain our science objectives."