New observations of the dwarf planet Ceres, made by the HARPS spectrograph at ESO's La Silla Observatory in Chile show its bright spots become brighter during the day and show other variations, not only those changes related to planet's rotation. The results indicate the material of the spots is volatile and evaporates in the warm glow of sunlight.

Ceres is the largest of the asteroids in the belt between Mars and Jupiter, and the only one classified as a dwarf planet. Its surface has been thoroughly mapped for more than a year since NASA's Dawn spacecraft was orbiting the object. 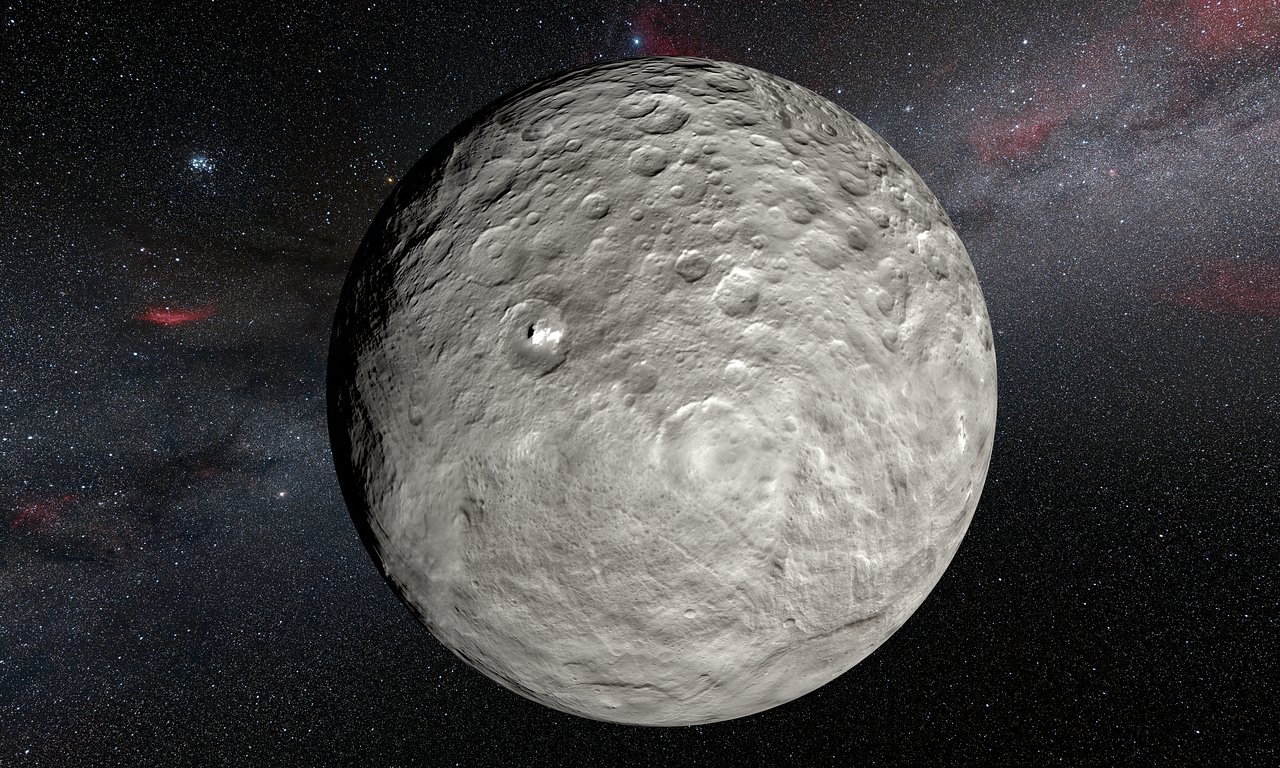 The artist’s impression of the dwarf planet Ceres, based on a detailed map of the surface compiled from images taken from NASA’s Dawn spacecraft. It shows the very bright patches of material in the crater Occator and elsewhere. Image credit: ESO/L.Calçada/NASA/JPL-Caltech/UCLA/MPS/DLR/IDA/Steve Albers/N. Risinger (skysurvey.org)

Discovered bright spots, which reflect significantly more light than the darker surrounding areas, have been one of the biggest mission's surprises. The discovery indicates the dwarf planet could be more active in comparison with its other asteroid neighbours.

Measurements conducted by the HARPS spectrograph at the ESO 3.6 m (11.8 feet) telescope at La Silla, Chile for little over two nights during July and August 2015, have been successful in observing the expected motion of the spots related to the dwarf planet's rotation about its axis, but have also detected other unexpected variations. The findings suggest the material of the spots is volatile and evaporates in sunlight. 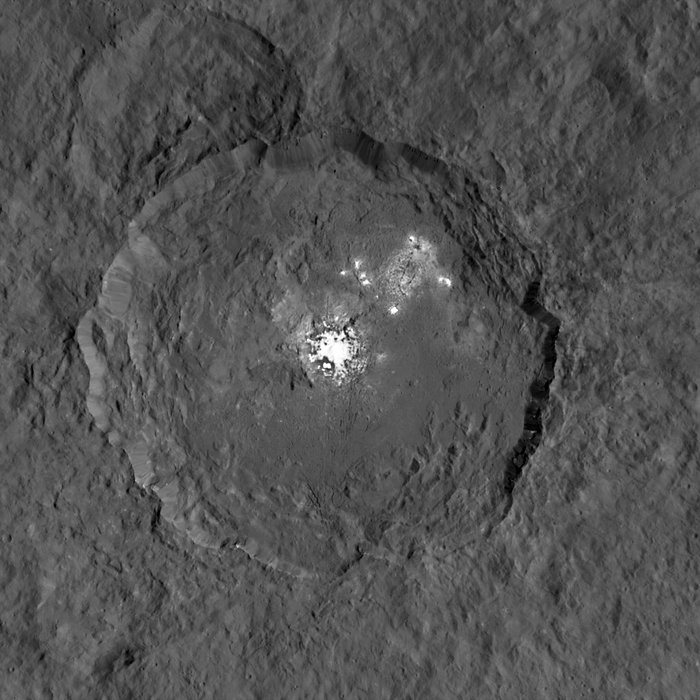 This image taken from NASA’s Dawn spacecraft in orbit around the dwarf planet Ceres shows the very bright patches of material in the crater Occator and elsewhere. Image credit: NASA/JPL-Caltech/UCLA/MPS/DLR/IDA

"As soon as the Dawn spacecraft revealed the mysterious bright spots on the surface of Ceres, I immediately thought of the possible measurable effects from Earth. As Ceres rotates the spots approach the Earth and then recede again, which affects the spectrum of the reflected sunlight arriving at Earth,” said Paolo Molaro at the Trieste Astronomical Observatory (INAF), the lead author of the new study.

According to the calculations, the motion effect of the spots related to Ceres' rotation would only be of the 20km/h (12 mph) order of magnitude. This value is large enough so it can be measured via the Doppler effect with instruments such as HARPS.

"The result was a surprise. We did find the expected changes to the spectrum from the rotation of Ceres, but with considerable other variations from night to night,” said Antonino Lanza, at the INAF–Catania Astrophysical Observatory and co-author of the study.

New observations are most likely due to the presence of volatile substances which evaporate under the solar radiation. When the bright spots inside the Occator crater get illuminated, they form plumes which effectively reflect the incoming sunlight, then evaporate quickly, lose reflectivity and produce the observed changes. This changing effect is subject to random patterns on the short and long timescales.

This illustration shows how the features in the spectrum of the light reflected from the bright spots is alternately red and blue shifted slightly compared to the average light of Ceres as it rotates. This very subtle effect has been measured from the ground using the HARPS spectrograph on the ESO 3.6-metre telescope at La Silla in Chile. The effect has been greatly exaggerated to make it visible and excludes the much brighter light coming from the rest of the disc of Ceres.Image credit: ESO/L.Calçada/NASA/JPL-Caltech/UCLA/MPS/DLR/IDA/Steve Albers

If new findings get confirmed, Ceres will stand out from its asteroid neighbors even further. Despite being relatively isolated, it seems to be internally active. The dwarf planet is also rich in water, but it remains unclear if this is related to the bright spots. The energy source that drives this continual leakage of material from the surface is also unknown.

Dawn will continue to study the dwarf planet and gather further information about the behaviour of its bright spots. Observations from the ground with HARPS and other facilities will be able to continue even after the end of the space mission.

Featured image: The artist’s impression of the dwarf planet Ceres, based on a detailed map of the surface compiled from images taken from NASA’s Dawn spacecraft. It shows the very bright patches of material in the crater Occator and elsewhere. Image credit: ESO/L.Calçada/NASA/JPL-Caltech/UCLA/MPS/DLR/IDA/Steve Albers/N. Risinger (skysurvey.org)