Weeks of very heavy rainfall caused widespread flooding which displaced more than 100 000 people in African countries of Malawi and Mozambique and devastated their crops and infrastructure. The number of displaced is expected to increase as severe weather will continue in parts of both countries over the coming days.

An estimated 75 000 people (15 000 households) have been displaced in Malawi, UN's Office for the Coordination of Humanitarian Affairs said today. Malawi's officials reported at least 48 people lost their lives by January 14.

Following the declaration of state of disaster on January 13 for areas affected by floods, Malawi's President Arthur Peter Mutharika, said the government will be establishing emergency operations centers in Blantyre, Lilongwe and Mzuzu, and ramping up preparedness efforts in the north of the country where more rains are expected over the coming week.

The crop outlook in Malawi, where much agriculture is still done by subsistence farmers, has deteriorated after a late start to rains in the summer planting season which usually gets underway in October or November, Reuters said.

"Delayed and overall below-average cumulative rains since the start of the rainy season in October last year have adversely affected the 2015 cereal crops, but prolonged heavy rains may worsen the situation," said Jeffrey Luhanga, Principal Secretary in the Ministry of Agriculture.

The agency warned of further heavy rainfall and flash floods over the coming weeks and advised people to avoid crossing fast flowing rivers and streams.

In neighboring Mozambique, floods are thought to have affected around 100 000 over the last few days. The worst hit area there is the province of Zambezia, where the Licungo river has overflowed, forcing between 15 000 to 20 000 people to leave their homes.

SA to send troops to help with #Mozambiquefloods, while rest of Africa wait on the west to deal with #Africanproblem. pic.twitter.com/fELO5gk5IR

District manager Teresa Mauhai told Radio Mozambique on Tuesday, January 13 that 18 children are missing in the Mocuba region near the Licungo river. The Licungo often floods around this time of year, FloodList explains.

It flooded during the massive floods of 2000 when a very long-lived Intense Tropical Cyclone "Leon", later named "Eline" by RSMC La Reunion, caused widespread flooding in the country.

At the time, Mozambique already had tremendous amounts of flooding and damage occurring across the country from previous torrential rains and cyclones when Eline struck. Eline directly killed 200 people and left 500 000 people homeless in Mozambique. An additional 700 people were killed by continued flooding from Eline and a later Tropical Cyclone "Gloria" in Mozambique, Zimbabwe and South Africa.

According to some reports, the 2015 flooding from the river is said to be some of the worst seen since 1971.

Another infrastructure washed away by flooding in #Mozambique – The railway line from Nampula to Niassa. pic.twitter.com/WG04hUpZK6

The Zambezi River has now also risen beyond flood alert level on its middle and lower stretches, making some roads in the Zambezi basin impassable.

Most of the north has been without electricity since Monday, January 12 when 10 pylons were knocked down, Mozambique's independent television station STV said. Mozambique's electricity utility EDM said it would take a week to restore power supply in the north.

The Gathering Storm – Flooding Rivers in Mozambique by IRIN

Meanwhile, a tropical cyclone forming in the Mozambique Channel is continuing on its trajectory toward the east of Madagascar, and is expected to intensify and make landfall on January 16.

Current high water levels across the country, including around the capital Antananarivo, could exacerbate the impact of the system, which will be named Chedza. 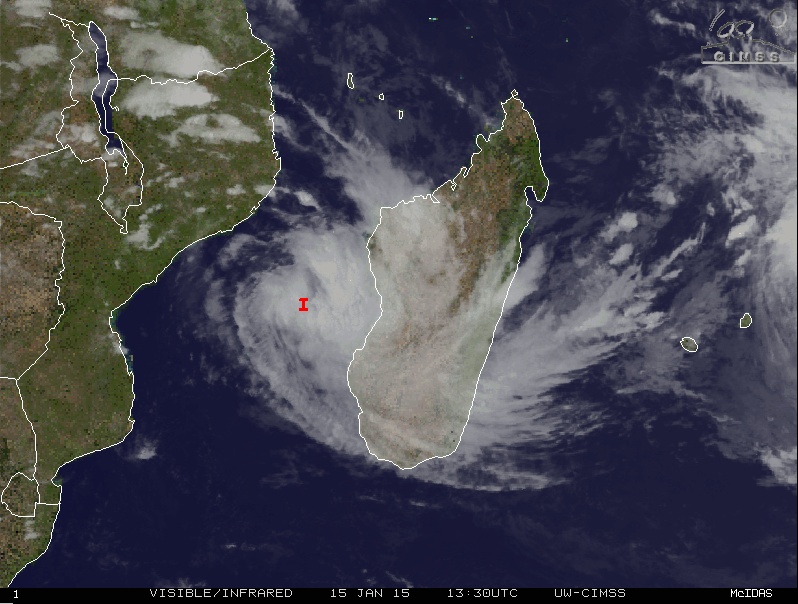 Many models are predicting that Tropical Cyclone "Chedza" will cross Madagascar fairly quickly, only to reorganize itself and move rapidly towards Réunion Island and Mauritius by January 18.

Over the next seven days, rainfall is set to decrease over much of Mozambique and southern Malawi, but heavy rains are expected further north over Zambia, Tanzania and northern Malawi.

With the approaching Tropical Cyclone "Chedza", Madagascar will continue to experience high rainfall.