Hawaiian Volcano Observatory (HVO) reports that the June 27th lava flow remains active and has moved downslope at a higher rate in the past few days (240 m, or 260 yd, per day).

The flow front crossed Apa‘a Street at approximately 13:50 UTC on Saturday, October 25, 2014 and is continuing to advance downslope along the path of steepest descent towards the central part of Pāhoa town.

The flow could impact other infrastructure within days depending on the actual advance rate of the flow, which fluctuates over time, HVO warned.

Through the Saturday morning, the flow moved downslope along the cemetery driveway before veering to the southeast into the adjoining pasture in the early afternoon. The advance rate of the narrow finger varied between 10 and 15 m/hr (11 to 16 yd/hr) – that’s equivalent to 240 – 360 m/day (260–390 yd/day).

Left: The June 27th lava flow crossed Apaʻa Street / Cemetery Road at 3:50 AM, HST, Saturday morning, October 25, 2014. In this photo, which was taken at about 9 AM Saturday, the flow is moving from right to left, with burning asphalt visible along it's NW margin. A utility pole, far right, was surrounded by lava but remained standing at the time of the photo. The hope is that the protective insulation and cinder/cement barrier around the pole will prevent it from burning through. Right: At 11 AM Saturday, the June 27th flow was advancing down the grassy driveway that leads to the Pāhoa cemetery. This view is looking upslope towards Apaʻa Street along the cemetery driveway. Image credit: USGS / HVO 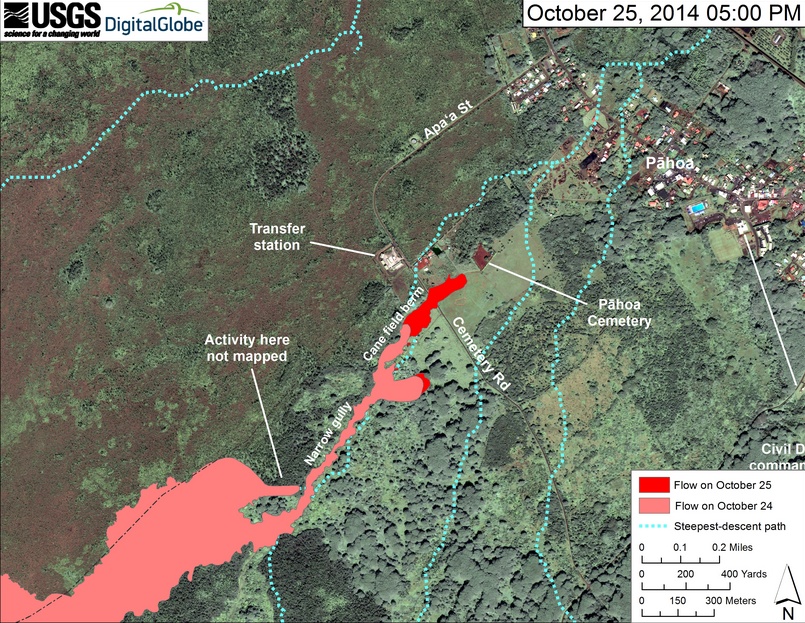 Flow front map at 1:12,000 scale. This map uses a satellite image acquired in March 2014 (provided by Digital Globe) as a base to show the area around the front of the June 27th lava flow. The area of the flow on October 24, 2014, at 12:10 PM is shown in pink, while widening and advancement of the flow as mapped on October 25 at 5:00 PM is shown in red. The dotted blue lines show the pertinent steepest-descent paths, calculated from a 1983 digital elevation model (DEM). Image credit: USGS / HVO

According to director of civil defense Darryl Oliveira, Kilauea's activity this year is historically different because it is approaching the center of the communities. An evacuation notice will be given in advance when the lava flow reaches a rate that will prevent people from leaving faster, he said. 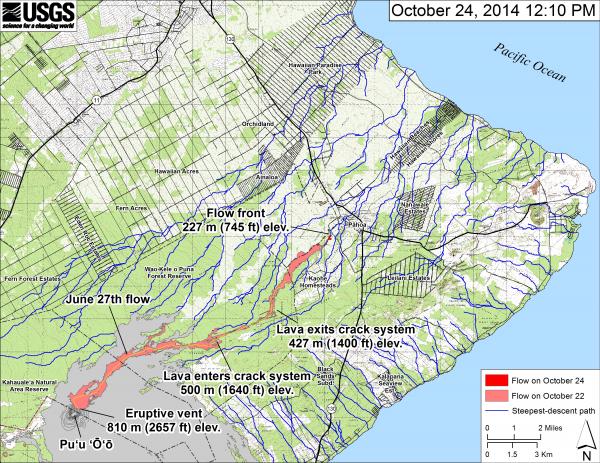 Small-scale map of June 27th flow in Kīlauea’s East Rift Zone. This small-scale map shows the June 27th lava flow in Kīlauea’s East Rift Zone in relation to lower Puna. The area of the flow on October 22, 2014, at 1:50 PM is shown in pink, while widening and advancement of the flow as mapped on October 24 at 12:10 PM is shown in red. The latitude and longitude of the front of the narrow finger of lava advancing toward Pāhoa was 19.48901, -154.95947 (Decimal Degrees; WGS84). All older Puʻu ʻŌʻō lava flows (1983–2014) are shown in gray; the yellow line marks the lava tube. The blue lines show steepest-descent paths calculated from a 1983 digital elevation model (DEM; for calculation details, see http://pubs.usgs.gov/of/2007/1264/). Steepest-descent path analysis is based on the assumption that the DEM perfectly represents the earth's surface. DEMs, however, are not perfect, so the blue lines on this map can be used to infer only approximate flow paths. Image credit: USGS / HVO

The pasture between Apaʻa Street and the cemetery is characterized by gentle topography, but the slopes increase at or just below the cemetery. If the flow reaches this point, its advance rate may increase.

The pasture is located between two of the steepest decent paths plotted on HVO’s lava flow maps, and it is unclear at this point which path the flow will follow. Both paths, however, join just below the cemetery, so the overall flow path leading to Pāhoa Village Road is unchanged. 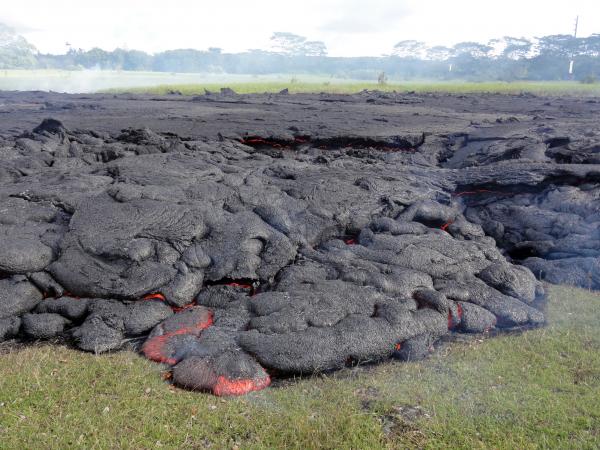 A typical portion of the pāhoehoe flow margin near the flow front, just downslope of Cemetery Rd./Apaʻa St. The horizontal incandescent cracks seen in the center and right portions of the photo indicate that the flow was inflating. Pāhoehoe inflation is driven by continued supply of lava beneath the surface crust, which slowly raises the surface. Image credit: USGS / HVO

HVO said the agency cannot provide the exact date when the lava is expected to reach destination as it has been erratic since the eruption in June.