Brazil’s Public Ministry acknowledged that the Sao Paulo water supply might only last another 100 days as drought conditions continue. The city with more than 20 million people is suffering its worst drought in at least 80 years. The most intense drought conditions and heat were felt from eastern Paraguay into the Brazil states from Parana to Mato Grosso and Bahia.

Vicente Andreu, president of Brazil's Water Regulatory Agency, warned São Paulo residents to brace for a "collapse like they've never seen before" if the drought continues. At least 14 million residents (of the 44 million that live in São Paulo state) have been affected by shortages as more than 35 municipalities have been forced to ration water. Already over 140 Brazilian cities have implemented water rationing during the worst drought in over twenty years, with some neighborhoods only receiving water once every three days.

The Operational Land Imager on the Landsat 8 satellite acquired these two natural-color views of the Jaguari Reservoir in Brazil. The left image shows the area on August 16, 2013, before the recent drought began and the right image shows the same area on August 3, 2014. Jaguari is one of five reservoirs in the Cantareira System, which supplies water to roughly half of the people in the São Paulo metropolitan area. (NASA Earth Observatory image by Jesse Allen, using Landsat data from the U.S. Geological Survey. Caption by Mike Carlowicz, with image interpretation from Marcos Heil Costa, Universidade Federal de Viçosa, and Alice Grimm, Universidade Federal do Paraná.)

The 2011 Urban Water Supply Atlas estimates that the regions that supply 73% of the country’s water needs could face shortages over the next decade. Brazil is the world’s leading exporter of soybeans, coffee, orange juice, sugar and beef, so these water stresses can also have a marked impact on the global food market.

"What's happening now highlights the importance of preserving and replenishing the Amazon if we want to prevent São Paulo from becoming a desert." Antonio Nobre, a leading climate scientist at INPE

Rainfall totals for the year are 300 to 400 millimeters (12 to 16 inches) below normal, and reservoirs have reduced to 3 to 5 % of storage capacity. Marcos Heil Costa, climate scientist at the Universidade Federal de Viçosa, noted the climate of the region is seasonal, with a rainy summer and a dry winter, and the drought has extended through the current dry season and the past rainy season, and the onset of the rainy season – which usually happens in late September or early October – has not happened yet. For the last rainy season, the pattern of reduced rainfall has been observed in the past, though the intensity was unprecedented this year. 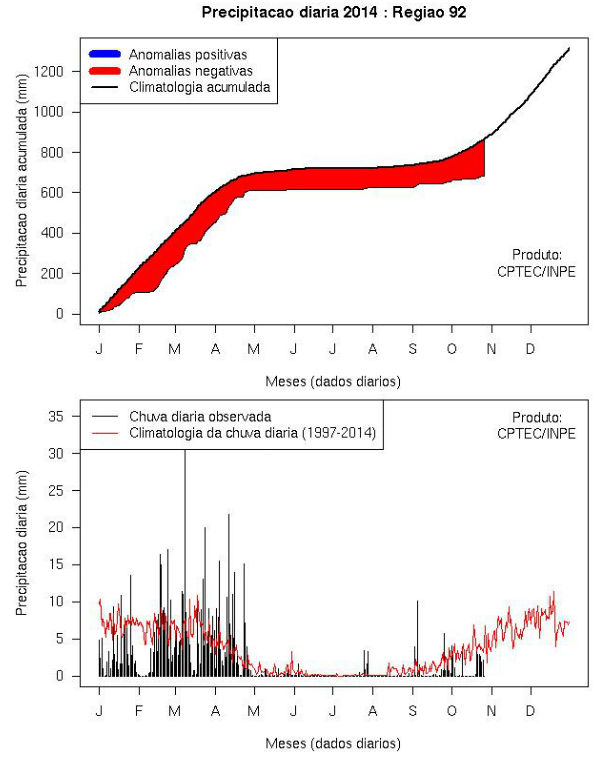 According to Antonio Nobre, a leading climate scientist at Brazil's National Space Research Institute (INPE), the lack of rain that has dried up key reservoirs in São Paulo and neighboring states in southeastern Brazil is not just the result of an aberration in weather patterns but also is strongly influenced by growing deforestation at Amazon rainforest.

Deforestation jumped by 29 % in the last officially recorded period, between August 2012 and July 2013, marking the first increase since 2008. A survey produced by Brazil's National Space Research Institute (INPE) using satellite imaging showed that the Amazon lost 5 891 km2 (2 275 square miles) of forests in that period. The number of fires in Brazil between January 1 and October 16 of this year increased 70% over the same period of 2013, according to the site of the fire system at the National Institute for Space Research, INPE. In the comparison between 1 to October 16, 2014 and 2013, an increase of fires in the country increased by 105%. The smoke from forest fires introduces too many particles into the atmosphere, dries the clouds and unables them to produce rains.

“Destroying the Amazon to advance the agricultural frontier is like shooting yourself in the foot. The Amazon is a gigantic hydrological pump that brings the humidity of the Atlantic Ocean into the continent and guarantees the irrigation of the region. Of course, we need agriculture,” he said. “But without trees there would be no water, and without water there is no food.” Antonio Nobre, a leading climate scientist at INPE

Latest figures from the Real Time Deforestation Detection System (Deter), based on high frequency satellite images used by INPE, show that, after falling for two years, Amazon deforestation rose again by 10 percent between August 2013 and July 2014, mostly due the logging and farming.

About 20 billion tonnes of vapor evaporate from the Amazon region every day. A big Amazonian tree, with a crown measuring 20 meters, can evaporate up to 300 liters a day, compared with one liter evaporated by a square meter of ocean. Global warming and the deforestation of the Amazon are altering the climate in the region by drastically reducing the release of billions of liters of water by rainforest trees. Humidity that comes from the Amazon in the form of vapor clouds that scientist dubbed 'flying rivers' – has dropped dramatically.

Meteorologist Jose Marengo, a member of the Intergovernmental Panel on Climate Change, first coined the phrase “flying rivers” to describe these massive volumes of vapor that rise from the rainforest, travel west, and then – blocked by the Andes – turn south. "Flying rivers" (Rios Voadores) are basically air currents that bring water vapor from Amazonia, in the equatorial zone of Northern South America, down as far south as Northern Argentina. The humidity carried by these “airborne rivers” is responsible for much of the rain that falls in certain areas. The quantity of water transported by the flying rivers could well be equivalent to or even greater than the flow of the mighty Amazon itself, which is 200,000 cubic meters per second.

During January and February this year, the flying rivers failed to arrive, unlike the previous five years. 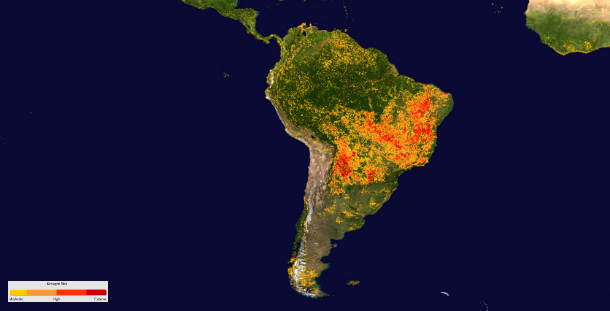 Daily drought risk map. (Derived from Normalized Difference Vegetation Index datasets developed by NOAA and the National Weather Service from measurements of the AVHRR sensor onboard the POES satellite) 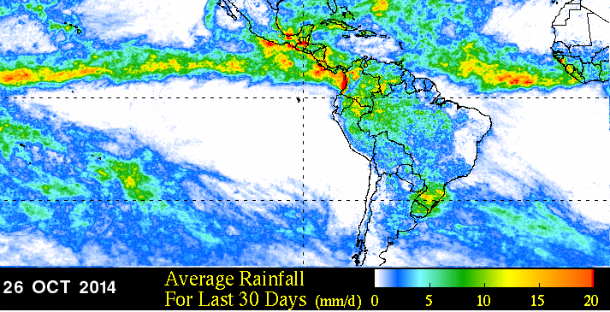 São Paulo has a humid subtropical climate that is mild with no dry season, constantly moist (year-round rainfall). According to the Holdridge life zones system of bioclimatic classification São Paulo is situated in or near the subtropical moist forest biome. 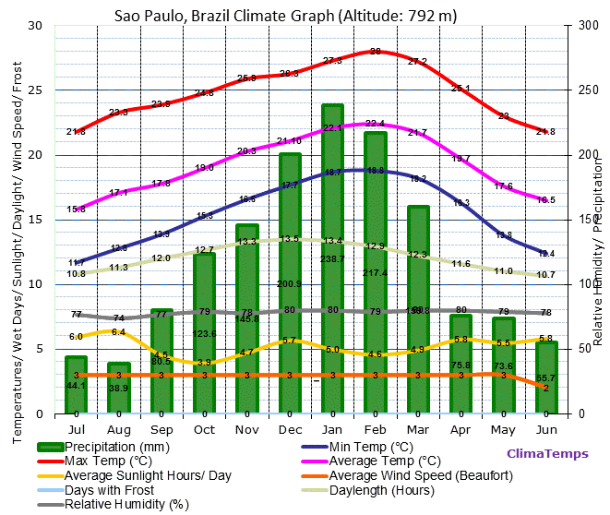