Heavy rain unleashed by Tropical Cyclone "Hudhud" which made made landfall in Andhra Pradesh at India's east coast around 05:00 UTC on Sunday, October 12, 2014, caused flooding and mudslides across portions of eastern India but that was not the end of it.

What was left of the weakening cyclone has tracked across India's Andhra, Chhattisgarh, Madhya, Jharkhand, Uttar and Bihar states over the next couple of days and caused unseasonal blizzards and numerous avalanches at high altitudes in Nepal's Himalayas which by latest reports claimed lives of at least 27 people on Wednesday, October 15, 2014. October is the most popular trekking season in Nepal, with thousands of foreigners hiking in the Himalayan mountains. 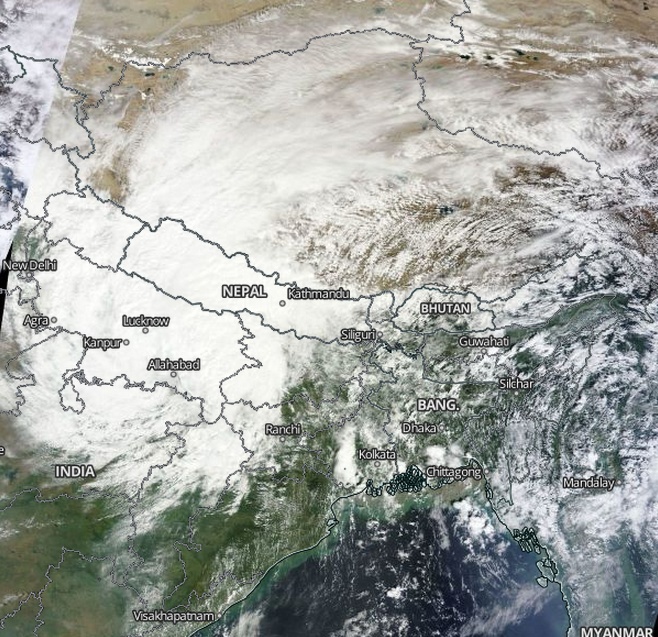 The secretary general of the Himalayan Rescue Association Nepal, Basant B. Hamal, told the New York Times that there might have been up to 200 trekkers on the mountain when the storm hit. He added that communications in the area had been disrupted by the extreme weather.

More than 120 people are still unaccounted for and more bodies were likely to be found, according to one government official.

Gopal Babu Shrestha, the treasurer of the Trekking Agencies' Association of Nepal, said it was one of the worst mountaineering accidents he can remember. As well as the dead climbers – who come from numerous countries – several farmers in the Mustang district died when they were buried under deep snow. (DailyMail)

The death toll from this incident has already surpassed that of Nepal's other recent mountaineering disaster on April 18, 2014, when 16 Sherpa guides were killed on Mount Everest in the deadliest single incident in the mountain's history.