Scientists at the Beijing Key Laboratory of CryoBiomedical Engineering, part of the Technical Institute of Physics and Chemistry at the Chinese Academy of Sciences, have developed a new conceptual liquid-phase 3D printing method with "ink" consisting of a metal alloy with a melting point slightly above room temperature.

Wang and Liu explain that liquid phase 3D metal printing allows us to use metals that melt at lower temperatures, cool quickly and allow much faster prototyping. Because the metal melts so much more quickly, much less energy is used. They also state that metals with low melting points, especially the ones that melt at room temperature, have been extensively used in the areas of computer chip cooling, thermal interface materials and microfluidics in recent years. 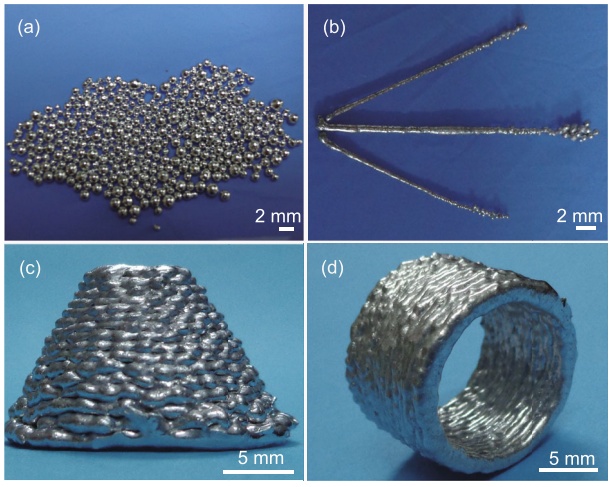 A four-element alloy was developed and adopted as the printing ink: Bi35In48.6Sn15.9Zn0.4 alloy, which demonstrates the basic working principle of liquid phase 3D printing method. This is a mixture of bismuth, indium, tin and zinc and has a melting temperature of slightly above room temperature. However, the method the researchers conceptualized can also be applied to a number of other alloys.

As they explained in the research paper, 'these include gallium-, bismuth- and indium-based alloys. Addition of nanoparticles such as copper, silver particles into such metal fluids also offers a method to fabricate functional inks as desired. Besides, combination of metal and nonmetal material together can be adopted to make diverse printing inks.

First, a 3D object is generated as a computer-aided design (CAD) model, and then converted into an STL (STereoLithography) file. The STL file is imported into an open source software program that generates slices of the object as a set of horizontal layers and that generates tool paths for each layer. In the process, syringes are as used printing “nozzles,” which deposit droplets into the cooling fluid.

Upon rapid cooling, the droplets becomes hard and fuse onto each other, over and over, until the complete 3D structure is printed. This method works because the droplets melt easily and can again retain their shape. 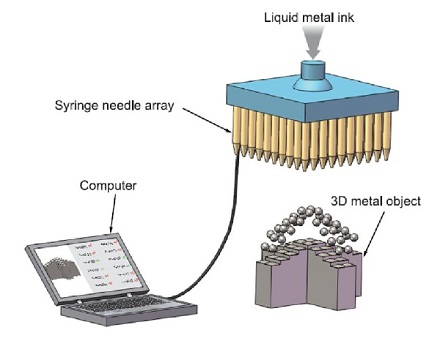 There are several advantages of the method over traditional printing methods. It is a faster process and can develop a wider variety of 3D printed bodies, including some unique metal structures like a 3D rotating body or 3D electromechanical systems.

A conductive liquid metal can be used in conjunction with nonmetal materials (e.g. plastic) to form 3D functional devices that include supporting structures and conductive devices. The combination of liquid phase 3D printing and conventional printing can meet all kinds of objectives.

The researchers also described the contours of a liquid phase 3D printer of the future. To optimize the accuracy and speed of 3D printing, they propose adopting a combination of a syringe pump array and a syringe needle array. In this system, the syringe pump array is used to extract the liquid metal solution, while the syringe needle array is deployed to inject the liquid metal ink into the cooling fluid.

The injection needles can be replaced conveniently with others of different sizes to meet various printing objectives. Transforming digital 3D models into printed structures and controlling each needle's injection speed are completed through a computer-implemented process. In this way, 3D metal objects are printed on the bottom of a trough holding the cooling fluid, formed of water, ethanol or other substance.