“We are revolutionizing 3D printing on the micrometer scale. Precision and speed are achieved by the industrially established galvo technology. Our product benefits from more than one decade of experience in photonics, the key technology of the 21st century.”

This 3D printing method uses direct laser writing technique, which is based on two-photon polymerization. It uses ultra-short laser pulses to polymerize photosensitive materials in the laser focus, just like paper ignites when exposed to sunlight focused through a magnifying glass. Depending on the photosensitive material chosen, the exposed or unexposed volume only is dissolved. After a developer bath, these written areas remain as self-supporting micro- and nanostructures.

By means of the galvo technology, three-dimensional micro- and nanostructures can be printed rapidly and, hence, on large areas in principle. At highest resolution, however, the scanning field is limited physically to a few 100 µm due to the optical properties of the focusing objective. Just as floor tiles must be joined precisely, the respective scanning fields have to be connected seamlessly and accurately. By the so-called stitching, areas can be extended nearly arbitrarily. 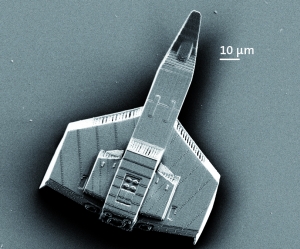 Hellcat on the microscale, fabricated with a Photonic Professional system. Printing a miniaturized object like a spaceship model is reduced to less than one minute without loss of quality (Credits: Nanoscribe)

Earlier this week, we talked about 3D printing, an innovative technology with numerous practical applications and ongoing patent clashes.