A new NASA mission designed to boost global monitoring of ocean winds, improve weather forecasting and climate studies is now on its way to the International Space Station aboard SpaceX's Dragon spacecraft. The cargo ship launched on the Falcon 9 rocket from Space Launch Complex-40 at Cape Canaveral Air Force Station in Florida at 05:02 UTC on Sunday, September 21, 2014.

The International Space Station-Rapid Scatterometer, or ISS-RapidScat, mission will monitor ocean winds from the vantage point of the space station.

This space-based scatterometer, developed by NASA's Jet Propulsion Laboratory, is a remote sensing instrument that uses radar pulses reflected from the ocean's surface from different angles to calculate surface wind speed and direction. This information will be useful for weather and marine forecasting and hurricane monitoring. 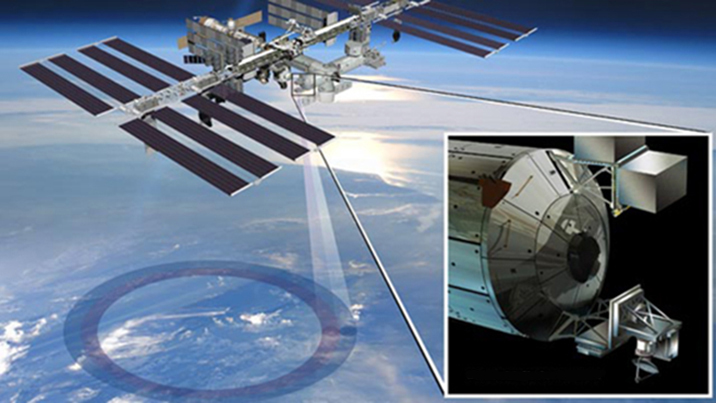 Artist's rendering of NASA's ISS-RapidScat instrument (inset), which will launch to the International Space Station in 2014 to measure ocean surface wind speed and direction and help improve weather forecasts, including hurricane monitoring. It will be installed on the end of the station's Columbus laboratory. Credit: NASA/JPL-Caltech/Johnson Space Center. ​

NASA's ISS-RapidScat mission will observe ocean wind speed and direction over most of the globe, bringing a new eye on tropical storms, hurricanes and typhoons.

The new mission will also provide cross-calibration of the international constellation of ocean wind satellites, extending the continuity and usefulness of the scatterometer data record.

ISS-RapidScat's berth on the space station will put it in an orbit that is unique from any other wind measuring instrument currently in orbit. This vantage point will give scientists the first near-global direct observations of how ocean winds vary over the course of the day due to solar heating.

Approximately nine days after berthing with the station, the RapidScat instrument and its nadir adapter, which orients the instrument to point down at Earth, will be robotically installed on the External Payload Facility SDX site of the Columbus module over a three-day period by the station's robotic arm, which is controlled by ground controllers at NASA's Johnson Space Center. ISS-RapidScat is an autonomous payload, requiring no interaction from station astronauts.

With the use of a different end effector – a mechanical hand – the station's robotic arm will first extract RapidScat's nadir adapter from the trunk of the Dragon and install it on an external site on the Columbus module. The arm will then pluck the RapidScat instrument assembly from the Dragon's trunk and attach it to the nadir adapter, completing the installation. Each of the two operations will take about six hours.

RapidScat will then be ready to begin its two-year science mission.

Other than the RapidScat, Dragon will also deliver the first-ever 3-D printer in space. The technology enables parts to be manufactured quickly and cheaply in space, instead of waiting for the next cargo resupply vehicle delivery. The research team will also gain valuable insight into improving 3-D printing technology on Earth by demonstrating it in microgravity.

The Rodent Research Hardware and Operations Validation (Rodent Research-1) investigation provides a platform for long-duration rodent experiments in space. New biomedical hardware launched aboard the spacecraft will help facilitate prolonged biological studies in microgravity. These investigations examine how microgravity affects animals, providing information relevant to human spaceflight, discoveries in basic biology and knowledge that may have direct impact toward human health on Earth.

Other important cargo of the Dragon spacecraft are other biological research, including a new plant study. The Biological Research in Canisters (BRIC) hardware has supported a variety of plant growth experiments aboard the space station. The BRIC-19 investigation will focus on the growth and development in microgravity of Arabidopsis thaliana seedlings, a small flowering plant related to cabbage. Because plant development on Earth is impacted by mechanical forces such as wind or a plant's own weight, researchers hope to improve understanding of how the growth responses of plants are altered by the absence of these forces when grown in microgravity.

Dragon is scheduled to be grappled at 11:04 UTC on Tuesday, September 23, by Expedition 41 Flight Engineer Alexander Gerst of the European Space Agency, using the space station's robotic arm to take hold of the spacecraft. NASA's Reid Wiseman will support Gerst in a backup position. Dragon is scheduled to depart the space station in mid-October for a splashdown in the Pacific Ocean, west of Baja California.