Hawaii issued a state of emergency for its Kilauea Volcano on September 4, 2014. As the lava flow that started during the June 27th eruption continues to advance toward populated areas residents are urged to finalize their evacuation plans.

According to Hawaiian Volcano Observatory (HVO) report issued at 19:23 UTC on Thursday, September 18, 2014, Kīlauea continues to erupt at its summit and within the East Rift Zone, and gas emissions remained elevated.

Deflation occurred over the past day, with minor fluctuations in lava level. At the middle East Rift Zone, the front of the June 27th flow is advancing through forest in Kaohe Homesteads, and surface breakouts are also present closer to Puʻu ʻŌʻō. 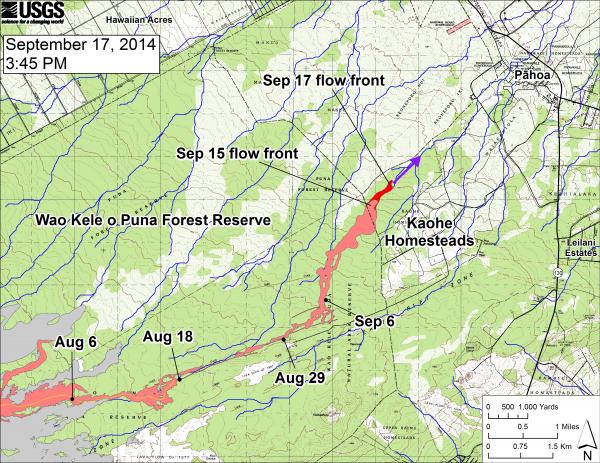 This large-scale map shows the distal part of the June 27th flow in relation to nearby Puna communities. The black dots mark the flow front on specific dates. The latitude and longitude of the flow front on September 17 was 19.4737016 /-154.977834 (Decimal degrees; WGS84). The blue lines show down-slope paths calculated from a 1983 digital elevation model (DEM; for calculation details, see http://pubs.usgs.gov/of/2007/1264/). Down-slope path analysis is based on the assumption that the digital elevation model (DEM) perfectly represents the earth's surface. But, DEMs are not perfect, so the blue lines on this map indicate approximate flow path directions. The purple arrow shows a short term projection of flow direction based on the flow behavior over the past several days and the local topography. Image credit: USGS / HVO 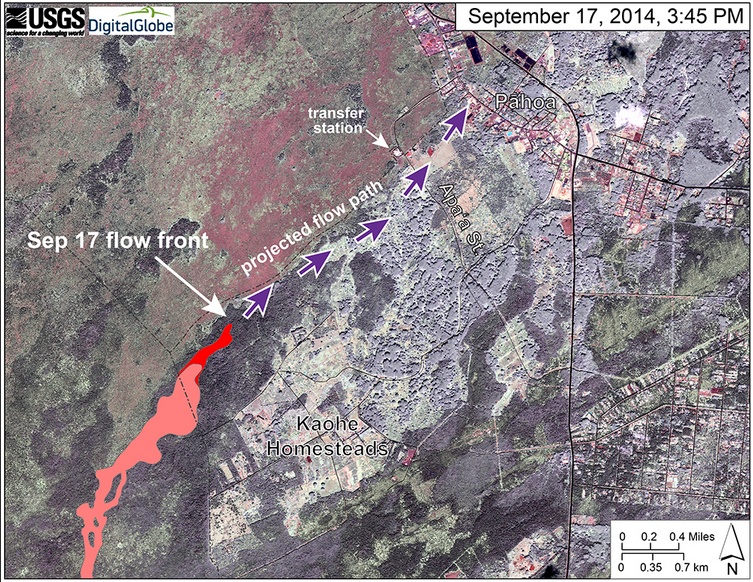 ​​This map uses a satellite image acquired in March 2014 as a base image to show the area around the front of the June 27th lava flow. The purple arrows show the projected path of the flow over the coming two weeks, based on the current flow activity and local topography. Lava flow behavior is complex and this projection is subject to change. Satellite image provided by Digital Globe. Annotation: USGS / HVO

The leading tip of the flow has narrowed over the past several days, and was 90 – 140 meters wide (300 – 460 feet) – this narrowing may be related to its increase in advance rate. The flow front was 16.0 km (10 miles) from the vent, measured in a straight line. The actual length of the flow, measured along the lava tube axis (so that bends in the flow are considered) was 18.3 km (11.4 miles). 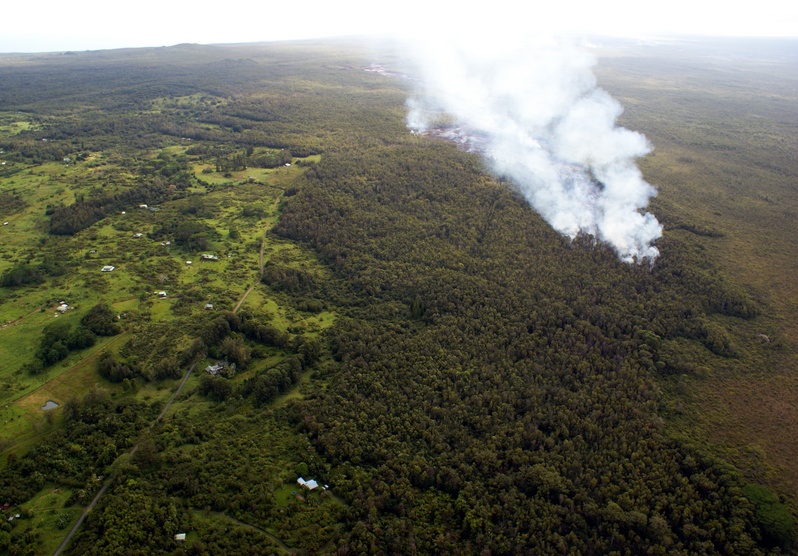 The flow front on Wednesday afternoon was 2.7 km (1.7 miles) upslope from Apa`a Road. The flow front is still in thick forest, creating smoke plumes as it engulfs trees and other vegetation, but fires are not spreading away from the flow. 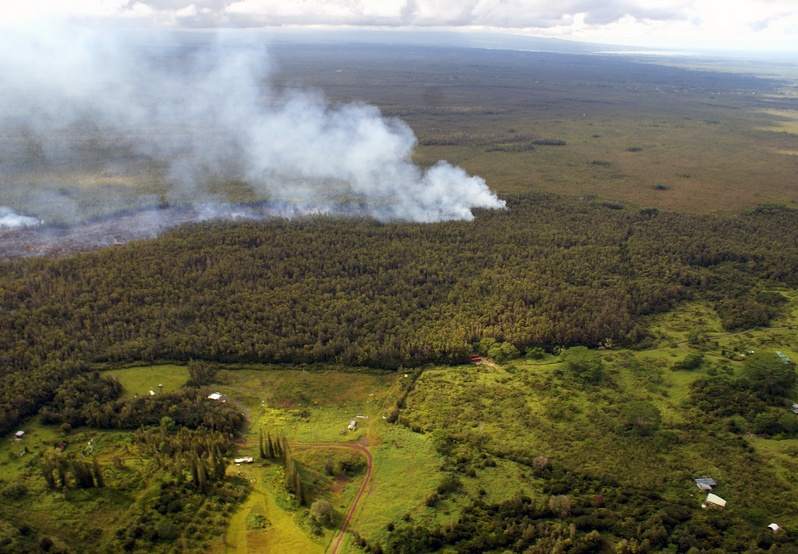 Small breakouts also remain active closer to Puʻu ʻŌʻō, roughly midway along the length of the June 27th flow. None of these breakouts have been very vigorous recently, but are also producing smoke plumes as they creep into the adjacent forest.

Near-vent areas could erupt or collapse without warning with spatter and/or ash being wafted within the gas plume.

In addition, potentially-lethal concentrations of sulfur dioxide gas may be present within 1 km downwind of vent areas. Active lava flows within forested areas can produce methane blasts capable of propelling rocks and other debris into the air. All recently active lava flows are within Hawaiʻi Volcanoes National Park and adjacent State land managed by the Department of Land and Natural Resources or the Office of Hawaiian Affairs. 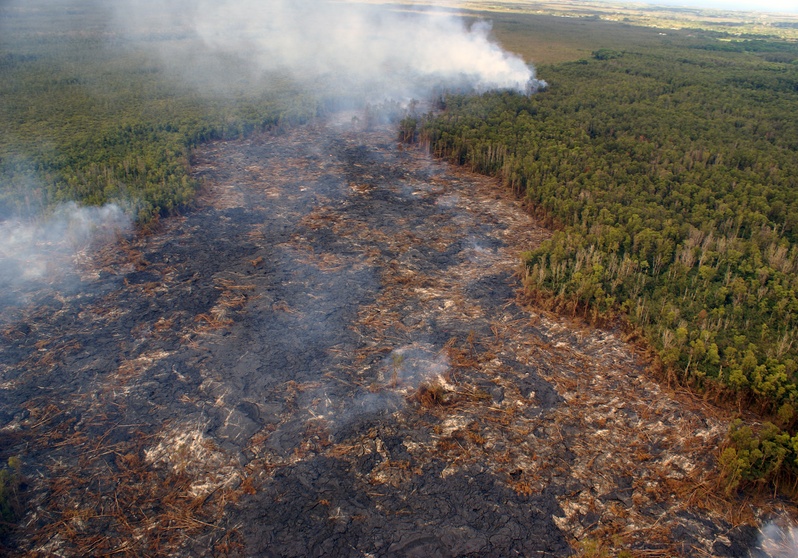 A view looking down the axis of the flow at the flow front. Pāhoa is in the upper right portion of the photograph. Image credit: USGS / HVO

The Hawaii Department of Health (DOH) has issued a health advisory for smoke exposures:

"DOH recommends that residents in smoke affected areas avoid outdoor activities or physical exertion. People with respiratory illness or heart disease, older adults and children are urged to avoid smoke exposure. Smoke may worsen symptoms for individuals who have pre-existing respiratory conditions, such as allergies, asthma, and chronic obstructive pulmonary disease (COPD). Individuals that have these conditions should keep their medication refilled and use daily (controller) medication as prescribed. Anyone who feels they may need medication or medical attention should contact their physician. Due to the unpredictable nature of the lava flow, residents and visitors are advised to listen to Hawaii County Civil Defense updates and advisories."

This report is based on September 18th data. Check the latest Kilauea status updates here (HVO).