A decades-old puzzle about a fog of low-energy X-rays observed over the entire sky was recently resolved. Thanks to refurbished detectors first flown on a NASA sounding rocket in the 1970s, astronomers have now confirmed the long-held suspicion that much of this glow stems from a region of million-degree interstellar plasma known as the local hot bubble, or LHB.

At the same time, the study also establishes upper limits on the amount of low-energy, or soft, X-rays produced within our planetary system by the solar wind, a gusty outflow of charged particles emanating from the sun.

"Interactions between the solar wind and neutral atoms in comets, the outer atmospheres of planets, and even interstellar gas produce soft X-rays," explained team member Steve Snowden, an astrophysicist at NASA's Goddard Space Flight Center in Greenbelt, Maryland. "We need to account for these processes because the X-rays they produce complicate our observations of the wider universe."

Decades of mapping the sky in X-rays with energies around 250 electron volts – about 100 times the energy of visible light – revealed strong emission precisely where it shouldn't be. This glow, known as the soft X-ray diffuse background, is surprisingly bright in the gas-rich central plane of our galaxy, where it should be strongly absorbed. This suggested the background was a local phenomenon, arising from a bubble of hot gas extending out a few hundred light-years from the solar system in all directions. Improved measurements also made it increasingly clear that the sun resides in a region where interstellar gas is unusually sparse. Taken together, the evidence suggests our solar system is moving through a region that may have been blasted clear by one or more supernova explosions during the past 20 million years. 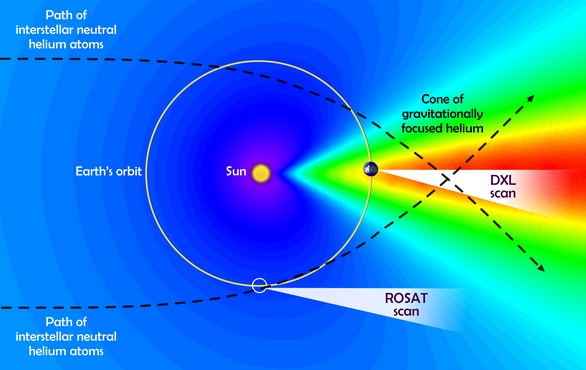 Colors indicate the density of interstellar helium near Earth and its enhancement in a downstream cone as the neutral atoms respond to the sun's gravity (blue is low density, red is high). Also shown are the observing angles for DXL and ROSAT. Image credit: NASA's Goddard Space Flight Center

In the 1990s, a six-month all-sky survey by the German X-ray observatory ROSAT provided improved maps of the diffuse background, but it also revealed that comets were an unexpected source of soft X-rays. As scientists began to understand this process, called solar wind charge exchange, they realized it could occur anywhere neutral atoms interacted with solar wind ions.

Within the last decade, some scientists have been challenging the LHB interpretation, suggesting that much of the soft X-ray diffuse background is a result of charge exchange," said F. Scott Porter, a Goddard astrophysicist also participating in the study. "The only way to check is to design an instrument and make measurements."

Galeazzi and his colleagues rebuilt, tested, calibrated, and adapted X-ray detectors originally designed by the University of Wisconsin and flown on sounding rockets in the 1970s. Components from another instrument flown on space shuttle Endeavour in 1993 also were given new life. The mission was named DXL, for Diffuse X-ray emission from the Local Galaxy.

The solar system is currently passing through a small cloud of cold interstellar gas as it moves through the galaxy. The cloud’s neutral hydrogen and helium atoms stream through the planetary system at about 56,000 mph (90,000 km/h). While hydrogen atoms quickly ionize and respond to numerous forces, the helium atoms travel paths largely governed by the sun's gravity. This creates a "helium focusing cone" downstream from the sun that crosses Earth's orbit and is located high in the sky near midnight in early December.

"This helium focusing creates a region with a much greater density of neutral atoms and a correspondingly enhanced charge exchange rate," Snowden said.

The solar wind is accelerated in the sun's corona, the hottest part of its atmosphere, so its atoms have been ionized — stripped of many of their electrons. When a neutral atom collides with a solar wind ion, one of its electrons often jumps to the charged particle. Once captured by the ion, the electron briefly remains in an excited state, then emits a soft X-ray and settles down at a lower energy. This is solar wind charge exchange in action.

To establish a baseline for the soft X-ray background, the researchers used data captured by the ROSAT mission in September 1990 in a direction looking along, rather than into, the helium focusing cone. The results, published online in the journal Nature on July 27, indicate that only about 40 percent of the soft X-ray background originates within the solar system.

"We now know that the emission comes from both sources but is dominated by the local hot bubble,” said Galeazzi. "This is a significant discovery. Specifically, the existence or nonexistence of the local bubble affects our understanding of the area of the galaxy close to the sun, and can, therefore, be used as a foundation for future models of the galaxy structure."

Galeazzi and his collaborators are already planning the next flight of DXL, which will include additional instruments to better characterize the emission. The launch is currently planned for December 2015.

"The DXL team is an extraordinary example of cross-disciplinary science, bringing together astrophysicists, planetary scientists, and heliophysicists," added Porter. "It’s unusual but very rewarding when scientists with such diverse interests come together to produce such groundbreaking results."