These levels of seismic vibration and continuous emission are indicators that there is a high probability of another eruptive activity in the central crater or flanks. MARN said it should be mentioned that the geological process may last for months or even years. 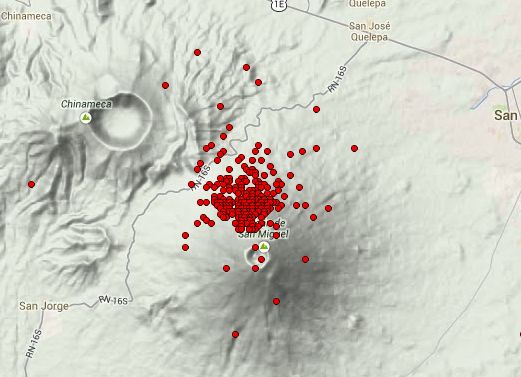 Epicenters of micro earthquakes located in the Chaparrastique volcano from January 27 to date. Image credit: MARN

Radial fissures on the flanks of the basaltic-andesitic volcano have fed a series of historical lava flows, including several erupted during the 17th-19th centuries that reached beyond the base of the volcano on the north, NE, and SE sides. The SE-flank lava flows are the largest and form broad, sparsely vegetated lava fields crossed by highways and a railroad skirting the base of the volcano. The location of flank vents has migrated higher on the edifice during historical time, and the most recent activity has consisted of minor ash eruptions from the summit crater. (GVP)