Conditions in the Pacific Ocean continue to suggest that a super strong El Niño might be forming in 2014. Strong bursts of winds coming out of the west in the equatorial tropical Pacific replaced the easterly winds and ocean surface currents, which normally move westward across the Pacific basin, have now reversed.

Some similarities exist between the ocean and atmospheric state right now compared to observations shortly before the onset of the 1997-1998 El Niño event, one of the most potent El Niño events of the 20th century.

A series of massive ripples in sea level (known as Kelvin waves) have been spotted moving across the Pacific from Australia to South America. Undersea Kelvin wave pattern was generated by localized west wind bursts in the western Pacific that began in mid-January 2014.

The current Kelvin wave is of approximately the same size as in 1997/98 but, based on current observations, it appears to contain more heat. In fact, it now appeares to be the hottest Kelvin wave ever seen. 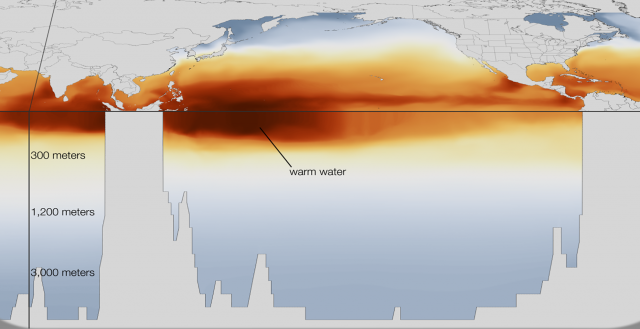 The maps above show the ten-day average of sea surface height centered on May 2, 1997 (left), and May 3, 2014. Shades of red and orange indicate where the water is warmer and above normal sea level. Shades of blue-green show where sea level and temperatures are lower than average. Normal sea-level conditions appear in white. The 1997 map was assembled from data collected by the TOPEX/Poseidon satellite, while the 2014 data comes from the Ocean Surface Topography Mission/Jason 2 satellite.

A new El Niño began to appear in the models during late February. NOAA's climate forecasters declared an "El Niño Watch" on March 6, 2014. Now, the latest model predictions of ENSO for this summer and beyond are indicating an increased likelihood. NOAA estimated a 65% chance of El Nino by late 2014 increasing odds of 2015 becoming the hottest year ever recorded on Earth.

These warnings caused a ripple of concern through the global food markets and world food security may be about to receive yet one more staggering blow. (RS)

Australia's Bureau of Meteorology (BoM) climate models suggest El Niño development is possible as early as July. While El Niño in 2014 cannot be guaranteed, the likelihood of an event developing remains at least 70% and they are at El Niño ALERT level.

"For El Niño to be established and maintained, coupling needs to occur between the tropical Pacific atmosphere and ocean, evident by further and persistent weakening of the trade winds and a consistent increase in cloudiness near the Date Line. These atmospheric characteristics of El Niño are forecast to become evident over the coming months." (BoM)

El Niño events are characterized by changes in global rainfall and storm activity, causing droughts and floods in different parts of the world. For example, below-average rainfall in the western Pacific and Indonesian regions and increased rainfall in the central and eastern Pacific. Southeast Asia often experiences an interruption of the annual monsoon in association with El Niño.

“If El Niño returns, the American West and Southwest could see major relief next winter from the long-lasting, punishing drought,” said climatologist Bill Patzert, who has been studying El Niño via satellite for two decades from NASA’s Jet Propulsion Laboratory. “Further, the very frigid winter in the upper tier of the U.S this past winter could do a flip to mild next winter.”

For Australia, El Niño is usually associated with below-average rainfall over southern and eastern inland Australia, with about two thirds of El Niño events since 1900 causing major drought over large parts of the continent.