Astronomers are excited about a new meteor shower that could put on a spectacular show on the night of May 24 when Earth and Moon pass through the dust trail left by Comet 209P/LINEAR in its past orbits. This meteor shower is new and no one is sure how much debris is waiting.

It could be the most intense meteor shower in decades with meteor storm as high as 1000 shooting stars per hour or a complete dud. It all depends on how active the comet was more than a century ago when the debris streams were laid down.

The new meteor shower is named May Camelopardalids and it favors observers in southern Canada and continental U.S. Its peak time is between 06:00 and 08:00 UTC on May 24th but outbursts could occur hours before or after the forecasted peak.

Since the Moon will pass through the same debris field too it is possible that some pieces will hit lunar surface. In such case explosions will be observable from Earth. The best time to scan the Moon for lunar meteors is after 08:00 UTC on May 24, according to NASA's Meteoroid Environment Office.

The inset in this picture of an actual lunar meteor shows the region of the crescent Moon on May 24th that could be pelted: 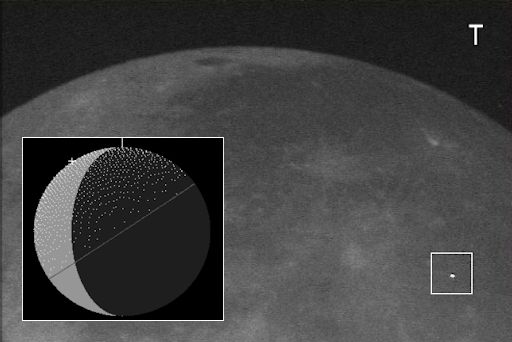 Comet 209P/LINEAR was discovered in February 2004 by the Lincoln Near-Earth Asteroid Research project, a cooperative effort of NASA, the Massachusetts Institute of Technology Lincoln Laboratory, and the US Air Force.

It is a relatively dim comet that dips inside the orbit of Earth once every five years as it loops around the Sun.  ​

SLOOH and NASA will also discuss their new partnership during the broadcast.