The event was felt widely throughout Orange, Los Angeles, Ventura, Riverside, and San Bernardino counties.  It was preceded by two foreshocks, the larger of M 3.6 at 03:03 UTC. According to USGS, the demonstration earthquake early warning system provided 4 second warning in Pasadena.

Residents in Orange County reported the quake lasted for about 10 seconds. They said they felt gradual shaking (ER).

There have been 23 aftershocks as of 05:00 UTC on March 29, the largest of which was a M 3.6 at 04:30 UTC, and was felt locally near the epicenter. The aftershock sequence may continue for several days to weeks, but will likely decay in frequency and magnitude as time goes by, USGS said. 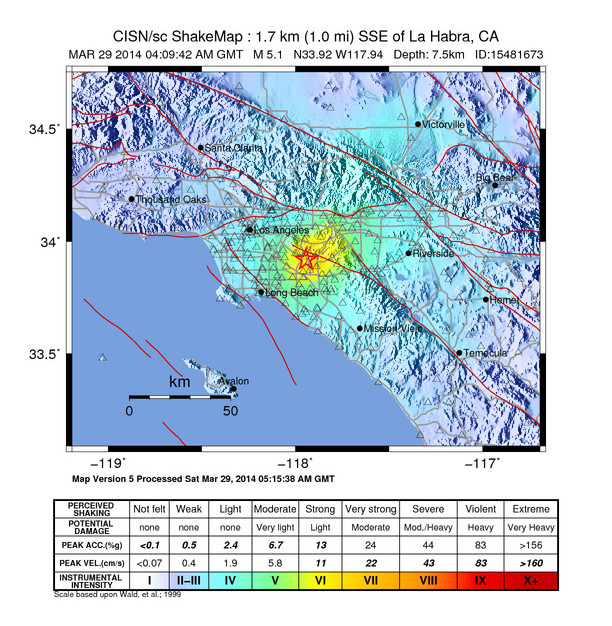 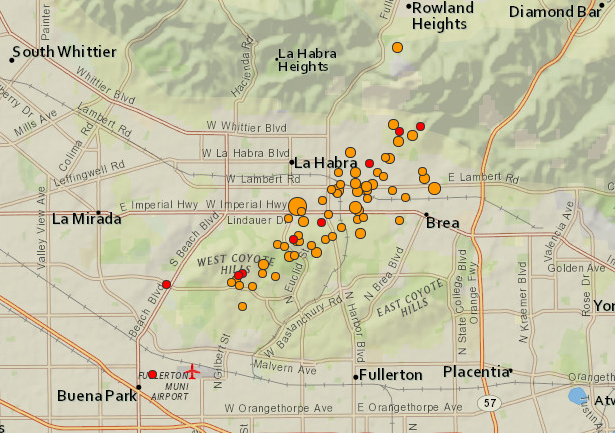 The maximum observed instrumental intensity was VII, recorded in the LA Habra and Brea areas, although the ShakeMap shows a wide area of maximum intensity of VI. The maximum reported intensity for the Did You Feel It? map was reported at VI in the epicentral area.

This sequence could be associated with the Puente Hills thrust (PHT).  The PHT is a blind thrust fault that extends from this region to the north and west towards the City of Los Angeles.  It caused the M 5.9 Whittier Narrows earthquake on October 1, 1987.

Previously, the M 5.4 Chino Hills earthquake in 2008 occurred in this region.  It caused somewhat stronger shaking in Orange County and across the Los Angeles Basin.

The moment tensor shows oblique faulting, with a north dipping plane that approximately aligns with the Puente Hills thrust.

The Los Angeles Fire Department said it was checking buildings and transport infrastructure for damage adding the quake was a reminder for people to be prepared.

The San Andreas fault, on the edge of the Pacific tectonic plate, runs directly through California, and the western US state has long braced for a devastating quake. The M 6.7 magnitude Northridge quake in 1994, left at least 60 people dead. A 6.9-magnitude quake in San Francisco five years earlier killed 67 people.