The Alaska Volcano Observatory raised the Aviation Color Code to ORANGE and Alert Level to WATCH at Shishaldin Volcano on March 28, 2014. Elevated surface temperatures were detected in satellite data beginning on March 18 and have persisted to the present time.

Analysis of this data shows that temperatures are consistent with the eruption of lava within the summit crater. The current activity appears to be confined to the deep summit crater and there have been no observations of lava on the flanks of the volcano or surrounding the summit crater.

Web camera images, satellite data and pilot observations over the past week show only minor steam emissions from the mountain's summit crater. There has been no evidence of ash emission.

Sound waves coupling into the ground (ground-coupled air waves) indicative of small explosions in the crater began to be seen in seismic data on March 18 and continue to be detected intermittently.

The following Landsat 8 image shows heat emission (radiance) from the lava in the summit crater on March 18 and March 27, 2014. 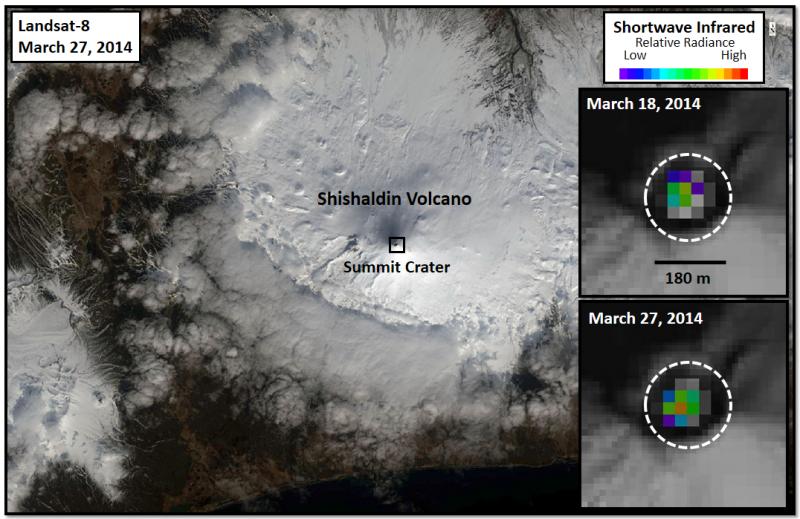 On January 30, 2014, the Alaska Volcano Observatory raised the Volcano Alert Level to ADVISORY and the Aviation Color Code to YELLOW for Shishaldin, based on satellite observations of the previous days. Satellite observations included increased surface temperatures in the summit crater, as well as increased emissions of steam. Similar levels of unrest were last observed during 2009, and did not result in an eruption.

"The beautifully symmetrical volcano of Shishaldin is the highest and one of the most active volcanoes of the Aleutian Islands. The 2857-m-high, glacier-covered volcano is the westernmost of three large stratovolcanoes along an E-W line in the eastern half of Unimak Island. The Aleuts named the volcano Sisquk, meaning "mountain which points the way when I am lost." A steady steam plume rises from its small summit crater. Constructed atop an older glacially dissected volcano, Shishaldin is Holocene in age and largely basaltic in composition.

Remnants of an older ancestral volcano are exposed on the west and NE sides at 1500-1800 m elevation. Shishaldin contains over two dozen pyroclastic cones on its NW flank, which is blanketed by massive aa lava flows. Frequent explosive activity, primarily consisting of strombolian ash eruptions from the small summit crater, but sometimes producing lava flows, has been recorded since the 18th century. (GVP)"

Featured image: Satellite image of Unimak Island showing elevated surface temperatures in the summit crater of Shishaldin Volcano. This mid-infrared image is scaled so that warm values are bright white and cold values (like high clouds are dark). The elevated surface temperatures are visible as the white pixels within the yellow circle that indicates the location of Shishaldin. Image credit: Alaska Volcano Observatory / U.S. Geological Survey. Photographer: David Schneider