These two M 6 earthquakes occurred in the same island as the destructive events of 1953. Between August 9 and 12 of 1953, three earthquakes of magnitude 6.4, 6.8 and 7.2 took place in Cephalonia leading to hundreds of casualties and strong damages all over the island, but also in Zante and Ithaca.

In the following months, 80% of the population left the island.

Many locals live with the fear of a possible repetition of 1953 as the coincidences are many. The forthcoming weeks and months will be a tough period for them as a barrage of aftershocks with an average magnitude above 4 is expected. (GreekReporter)

The general secretary of public works, Stratos Simopoulos told eKathimerini that by Sunday some 1 800 buildings had been inspected on the island and that 750 of them were deemed dangerous. That was before the second strong quake.

According to eKathimerini, the Infrastructure Ministry is providing residents who are currently sleeping in their cars, at public buildings deemed safe and on two specially dispatched ferry boats with temporary housing in the form of prefabricated and mobile homes, as the weather seems to be conspiring against the quake-hit islanders with low temperatures and rain.

Aftershocks map created by EMSC on February 4, 2014 shows locations of 738 aftershocks since January 26: 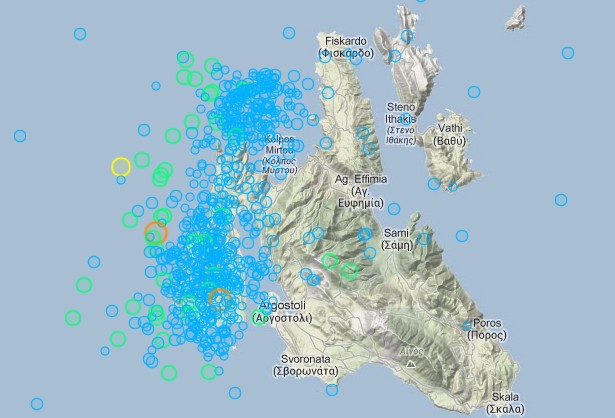