ASTER instrument aboard NASA's Terra satellite took this false-color image of the sibling African volcanoes, Nyamuragira and Nyiragongo, venting steam and other volcanic gases above the Congolese rainforest on January 29, 2014.

Recent lava flows are black or brown, the volcanic plumes are white or light blue, clouds are white, and vegetation is bright red. The image was collected on January 29, 2014 by the Advanced Spaceborne Thermal Emission and Reflection Radiometer aboard NASA’s Terra satellite. 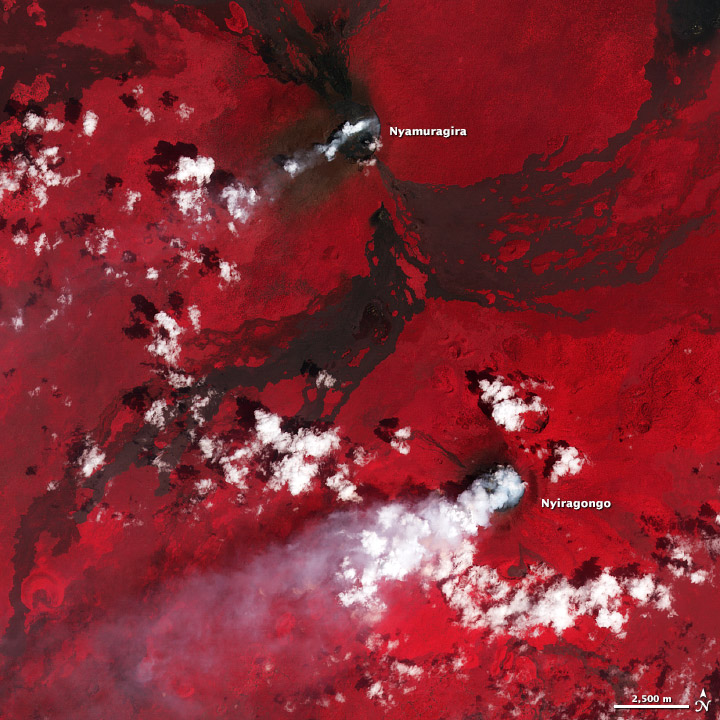 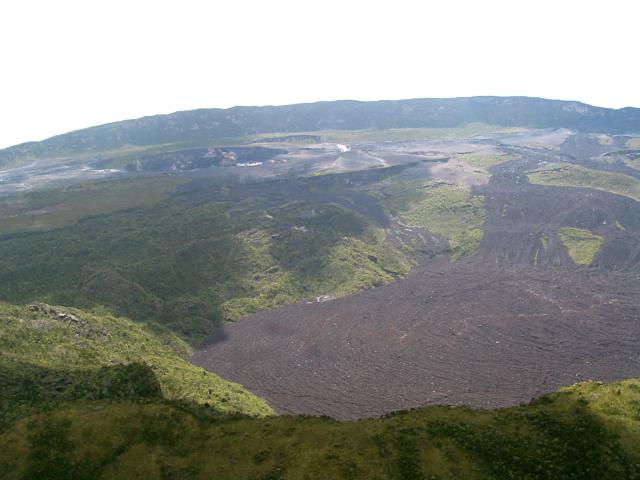 Africa's most active volcano, Nyamuragira is a massive high-potassium basaltic shield volcano that rises about 25 km north of Lake Kivu, NW of Nyiragongo volcano. Nyamuragira, also known as Nyamulagira, has a volume of 500 cu km, and extensive lava flows from the volcano blanket 1500 sq km of the western branch of the East African Rift.

The broad low-angle shield volcano contrasts dramatically with its steep-sided neighbor Nyiragongo. The 3058-m-high summit of Nyamuragira is truncated by a small 2 x 2.3 km caldera that has walls up to about 100 m high.

Historical eruptions have occurred within the summit caldera, frequently modifying the morphology of the caldera floor, as well as from the numerous fissures and cinder cones on the volcano's flanks. A lava lake in the summit crater, active since at least 1921, drained in 1938, at the time of a major flank eruption.

Historical lava flows extend down the flanks more than 30 km from the summit, reaching as far as Lake Kivu. (GVP)

Nyiragongo, one of Africa's most notable volcanoes, contained a lava lake in its deep summit crater that was active for half a century before draining catastrophically through its outer flanks in 1977. In contrast to the low profile of its neighboring shield volcano, Nyamuragira, 3470-m-high Nyiragongo displays the steep slopes of a stratovolcano. 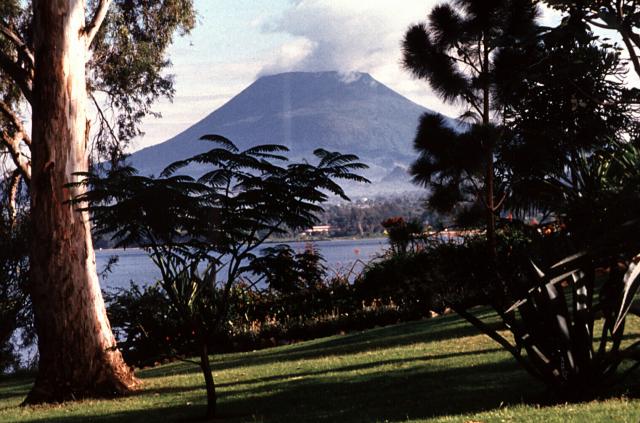 Benches in the steep-walled, 1.2-km-wide summit crater mark levels of former lava lakes, which have been observed since the late-19th century. Two older stratovolcanoes, Baruta and Shaheru, are partially overlapped by Nyiragongo on the north and south.

About 100 parasitic cones are located primarily along radial fissures south of Shaheru, east of the summit, and along a NE-SW zone extending as far as Lake Kivu. Many cones are buried by voluminous lava flows that extend long distances down the flanks of the volcano, which is characterized by the eruption of foiditic rocks. The extremely fluid 1977 lava flows caused many fatalities, as did lava flows that inundated portions of the major city of Goma in January 2002. (GVP)

Latest addition to GVP's weekly volcano report for this volcano was in the week of July 31 – August 6, 2013:

"According to NASA's Earth Observatory, a satellite image of Nyiragongo acquired on July 29 showed a red glow coming from the active lava lake in the summit crater. A diffuse blue plume drifted north. "