It is now entering the fields of view of space-based solar observatories and will be viewed first in what’s called coronagraphs, images that block the brighter view of the Sun itself in order to focus on the solar atmosphere, the corona.

ISON entered Large angle Heliospheric Imager 2 on the Ahead spacecraft (HI2-A) field of view on October 10, 2013 and was visible until November 23, 2013.

When ISON entered the field of view of the HI-1 camera it showed up clearly, appearing to still be intact:

ISON can be seen in these images along with Earth, Mercury and Comet 2P/Encke. The tails streaking out from behind both comets can be seen moving along with the steady stream of particles – called the solar wind – that flows out from the Sun. Image credit: Karl Battams/NASA/STEREO/CIOC

Both STEREO spacecraft will have a view of the comet in the COR1 and COR2 coronagraphs in the hours around closest approach on November 28.

STEREO-A will be the only one that sees the comet transit across the face of the Sun.

Solar Dynamics Observatory, or SDO, will view the comet for a few hours around perihelion. SDO’s imagery should be detailed enough to gather information about how the comet evolves through the radiation and pressure of the Sun’s atmosphere.

SDO spacecraft will off-point at three different positions as Comet ISON moves through perihelion. This website will display SDO's near realtime images and movies. Images should begin appearing sometime between 17:44 and 18:00 UTC (12:45 pm and 1:00 pm ET). The Sun will appear in the upper right corner of the images and Comet ISON will move through the images from the lower right to the upper left.

SDO home page will have images from four of the AIA wavelengths during each the views (off points), Approach, Perihelion, and Departure. These wavelengths were chosen because in December 2011, when Comet Lovejoy passed perihelion, it was very bright in these wavelengths, and they believe they are the best choice for Comet ISON. We will not see a normal comet tail. The glowing material is forced to move along the Sun's magnetic field. It will look like a cloud moving along and away from the orbit of the comet.​

From SOHO's viewpoint the comet enters from the lower right early on November 27 and exits towards the top near the end of November 30.

The X-Ray Telescope on the JAXA/NASA Hinode mission will also be looking at Comet ISON for about 55 minutes during perihelion. 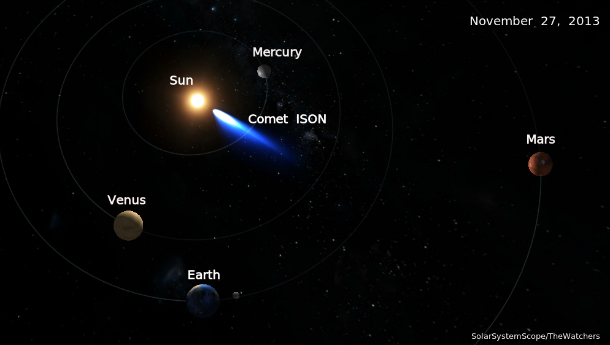 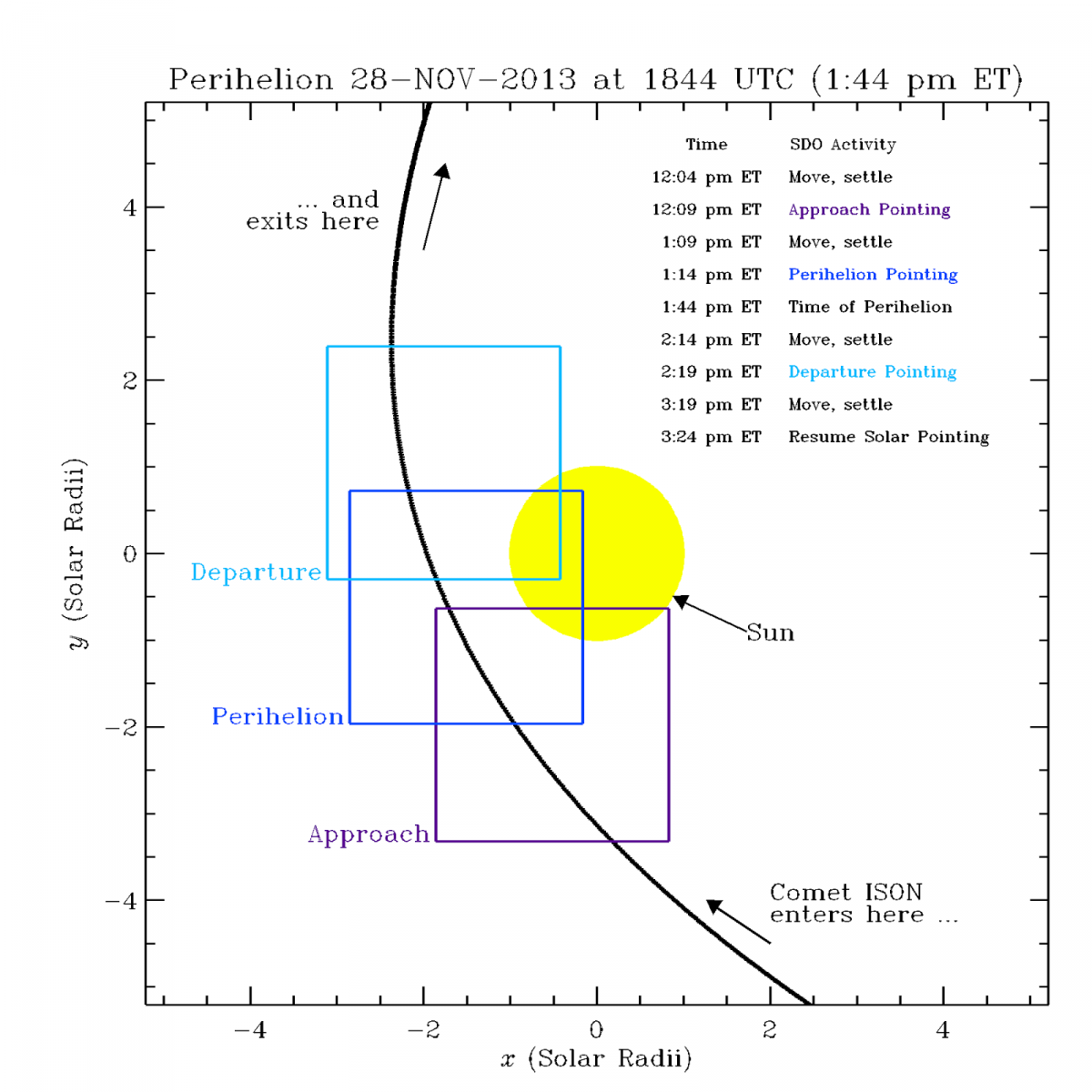 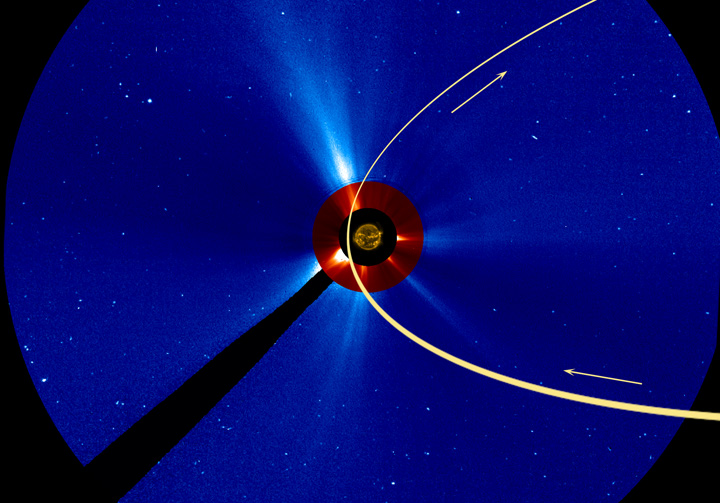 In addition, ground-based solar telescopes – observing in optical, infrared and radio wavelengths – will all be able to observe the comet during perihelion. Such observations will provide additional information about the composition of the comet and how material evaporates off it, fueling the dusty cloud that surrounds the nucleus.

Comet ISON vs. The Solar Storm

Science@NASA had interesting article about Comet ISON and solar storms on November 24th:

In 2007, astronomers were amazed when a solar storm hit Comet Encke.  NASA STEREO spacecraft watched as a CME (coronal mass ejection) struck the comet head on and ripped off its tail.

The same thing could be in store for Comet ISON–only worse.

On November 28th, Comet ISON will pass through the sun's atmosphere, flying little more than a million kilometers above the sun's surface. It will be ~30 times closer to the sun than Encke was in 2007 and more likely to encounter a ferocious solar storm.

"For one thing," says Angelos Vourlidas of the Naval Research Lab and a participant in NASA's Comet ISON Observing Campaign (CIOC), "the year 2007 was near solar minimum. Solar activity was low. Now, however, we are near the peak of the solar cycle and eruptions are more frequent."

"I would absolutely love to see Comet ISON get hit by a big CME," says Karl Battams, an astronomer at the Naval Research Lab who also works with the CIOC. "It won't hurt the comet, but it would give us a chance to study extreme interactions with the comet's tail."

If the Sun erupts, both comets could be engulfed by the same CME.  This would turn the two comets into solar probes. Like wind socks, they would sample the storm from two widely separated locations, giving researchers a rare 3D view of a CME's inner structure.

Comet ISON will be passing over the Sun's equator on November 28th on the same side of the Sun where a group of active sunspots was recently clustered.  In other words, says Battams, "we're going to be in the 'hot zone' for CMEs."

Along with amazing ground observations, an unprecedented international space fleet is tracking ISON. All of the missions have their important role and below is the list along with the links to their websites.