USGS reported today that since January 2009, more than 200 magnitude 3.0 or greater earthquakes have rattled Central Oklahoma, which marked a significant rise in the frequency of these seismic events.

Important to people living in the Oklahoma City region is that earthquake hazard has increased as a result of the swarm. USGS calculates that ground motion probabilities, which relate to potential damage and are the basis for the seismic provisions of building codes, have increased in Oklahoma City as a result of this swarm. While it’s been known for decades that Oklahoma is "earthquake country," the increased hazard has important implications for residents and businesses in the area. 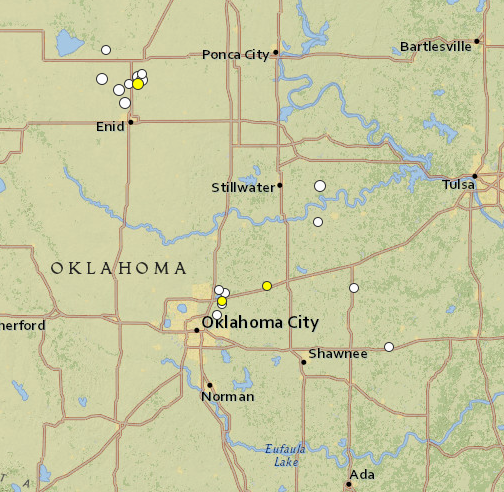 "The U.S. Geological Survey and Oklahoma Geological Survey are conducting collaborative research quantifying the changes in earthquake rate in the Oklahoma City region, assessing the implications of this swarm for large-earthquake hazard, and evaluating possible links between these earthquakes and wastewater disposal related to oil and gas production activities in the region."

"We've statistically analyzed the recent earthquake rate changes and found that they do not seem to be due to typical, random fluctuations in natural seismicity rates,"said Bill Leith, USGS seismologist. "These results suggest that significant changes in both the background rate of events and earthquake triggering properties needed to have occurred in order to explain the increases in seismicity. This is in contrast to what is typically observed when modeling natural earthquake swarms."

The analysis suggests that a contributing factor to the increase in earthquakes triggers may be from activities such as wastewater disposal – a phenomenon known as injection-induced seismicity. The OGS has examined the behavior of the seismicity through the state assessing the optimal fault orientations and stresses within the region of increased seismicity, particularly the unique behavior of the Jones swarm just east of Oklahoma City. The USGS and OGS are now focusing on determining whether evidence exists for such triggering, which is widely viewed as being demonstrated in recent years in Arkansas, Ohio and Colorado.

This "swarm" includes the largest earthquake ever recorded in Oklahoma, a magnitude 5.6 that occurred near Prague on November 5, 2011. It damaged a number of homes as well as the historic Benedictine Hall at St. Gregory's University, in Shawnee, Oklahoma.