For centuries the people of Ecuador have shared wild sounding stories of legendary ancient cities supposedly lost to the jungles. Many of these stories are based around the reasonable hypothesis that a number of Inca settlements have been swallowed up by the expansion of jungle areas, and the stories are kept alive by the tantalizing prospect of large amounts of Inca gold hidden in these few urbanized areas that did not fall to Spanish hands. We can say for certain that unlike Peru, it seems Ecuador has not had many recognized finds of significant ancient urban settlements.

Roughly one year ago we were included in a fortunate, I would say synchronous, meeting between two of our friends (both shamans) and a couple that wanted to discuss shamanic work-shops with them. In the conversation the couple brought up a recent jungle trek in which the husband had taken part and a set of ruins that he had visited, in his words by the trek going the wrong way. He was excited by the fact some artifacts at the ruins appeared to best suit abnormally large people.

This aspect is important as many local legends claim there was once a civilization here that was known for the giant size of its people. The idea of lost cities of giants in the jungle has until present remained largely a matter of myth and legend with only some solid evidence to support it as possible fact. Most notably we must flag up the finds of some bones here that are from humans of extreme height, well over two meters in some cases and one find on Loja suggests a humanoid of perhaps several meters tall.

It would seem now that these legends are at least based in fact. We have had the opportunity to meet with two members of the trek that visited the ancient site here in the jungles of Central Ecuador. We have viewed their photographs and listened to their accounts of what was discovered.

The total of this makes for a really fascinating story of incredible archaeological discovery. Myth has become fact. 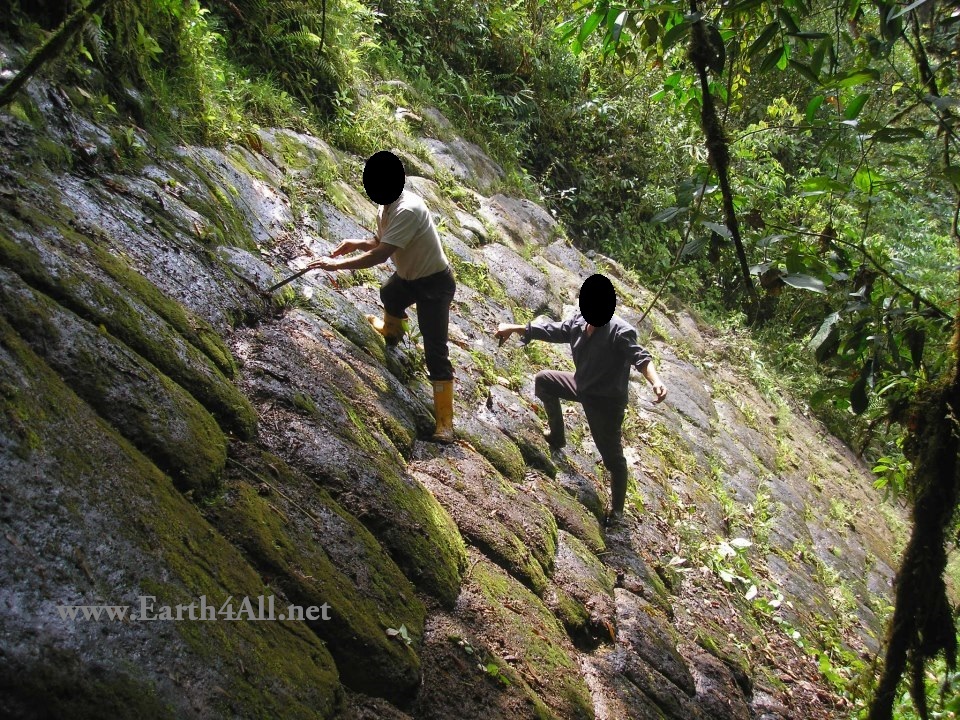 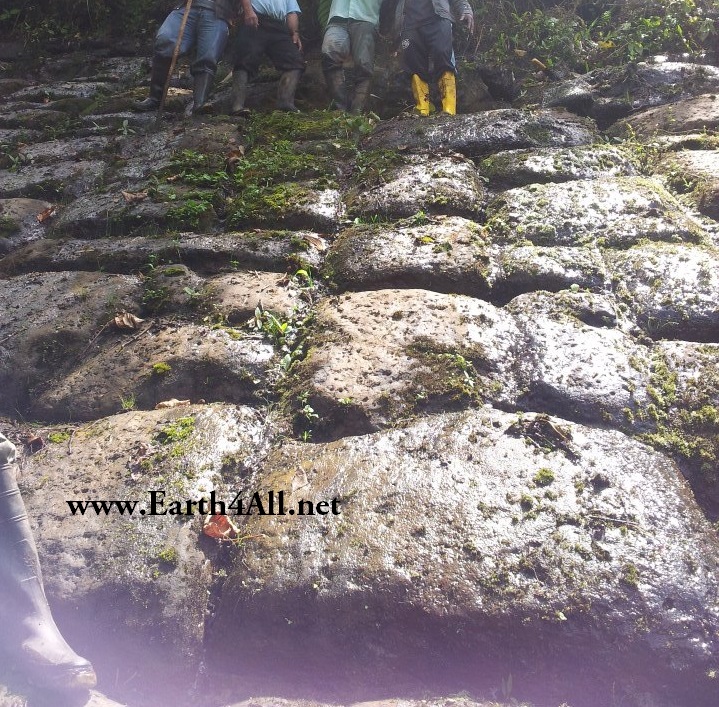 The total size of the complex located, is currently uncertain, a layer of soil has built up and covered structures at the site and then tropical foliage has taken root making buildings indistinguishable from the background of jungle plants. By good fortune a landslide induced either by heavy rain or by an earthquake brought down all of the material covering one side of a large pyramidal structure.

One witness we interviewed projected that the approximate size would be around 80 meters square at the base with inclined steeply walls rising to about 80 meters in height. He noted several nearby ‘hills’ of equal proportions and assumes these are all pyramids. The second witness, a scientist, estimates that the large stone blocks making up the structure are around two tonnes in weight each; many hundreds of such blocks make up the pyramid. The blocks are cut to irregular shapes and sizes and have then been cleverly interlocked and possibly in some way cemented into place.

The pyramid is not the only interesting find at the location as many objects were strewn around. These artifacts include a number of stone tools, seemingly types of hammers. There was also ceramic and pottery. Various other shaped stones and strange objects were noticed. This was of course only a tourist trek, not an archaeological expedition and as such only cursory observations were made and limited data is available at present. As we examine the photographs and video further and talk to other witnesses we will share further developments.

In a follow up article we will explore more of the local legends and some of our hypothesis as to which culture may be responsible and the timescale involved in the construction.

If you are interested in the subject covered here then you may also be interested in the writer’s (Bruce Fenton) recently published book, titled ‘Ancient Aliens in Australia: Pleiadian Origins of Humanity’, written in partnership with Steven and Evan Strong of www.ForgottenOrigin.com, authors of four books on human origins and lost civilizations. Purchases of this book help to fund further research into controversial theories and evidence of our true shared ancient origins. 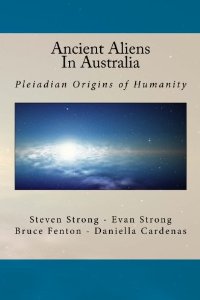 ​Please click the cover image (or here) to visit the books homepage for more details.