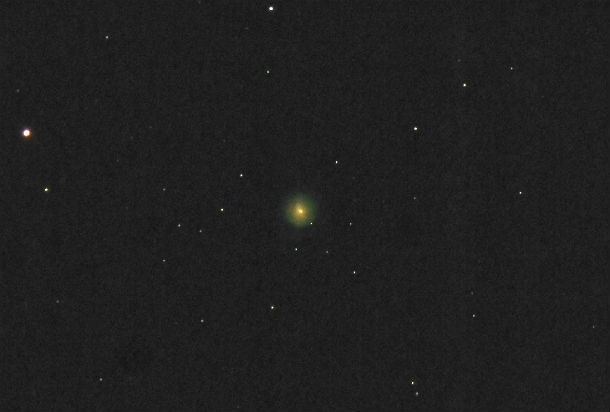 Comet C/2012 X1 (LINEAR) suddenly brightened some 150 times than expected. Althoug it was predicted to be 14th magnitude, it is extremely bright as 8.5 magnitude now. Hidetaka Sato and Seiichi Yoshida measured it brightness on October 20, 2013 as magnitude 8,5. Ernesto Guido, Nick Howes and Martino Nicolini performed follow-up measurements of this object on October 21, 2013 using a remotely-controlled 0.5 meter telescope in New Mexico. The picture bellow shows the spherical explosion on October 21, 2013. 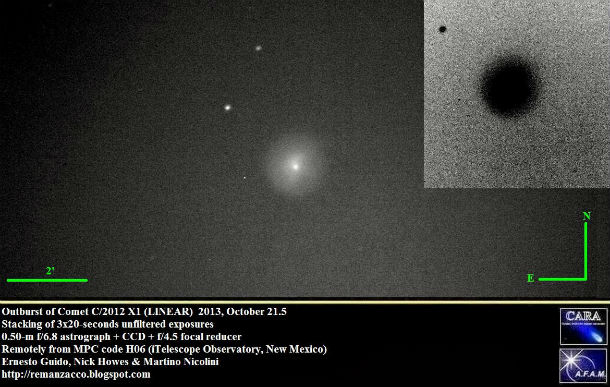 The huge cloud of gas and dust may have resulted from a collision with a meteoroid, or, more probably, from a build-up of gas inside the comet's nucleus, which eventually broke through the surface. Dr. Tony Phillips of SpaceWeather.com noted that the outburst does not necessarily signal a disintegration of the comet. Possibly, local vein or cavern of deep ice in the comet's nucleus has been exposed to sunlight and with rapid evaporation of fragile ices, it could account for the comet's bigger- and brighter-than-expected atmosphere. ​

Researchers at the Max Planck Institute suggest that the sudden brightening can be explained by a thick, air-tight dust cover and the effects of H2O with the comet's porous structure providing more surface area for sublimation, up to one order of magnitude greater.

Comet Holmes experienced similar outburst in October 2007 when it brightened over half a million times from magnitude 17 to 2.8 in only 42 hours and became visible to the naked eye. It was the largest known outburst by a comet and it also briefly became the largest object in the solar system, as it's coma expanded to a diameter greater than that of the Sun.

Comet C/2012 X1 (LINEAR) is currently almost 450 million km from Earth, located in the constellation Coma Berenices. It rises in the east about an hour before the dawn. It is still below the threshold for naked-eye visibility, but bright enough for backyard telescopes equipped with digital cameras. 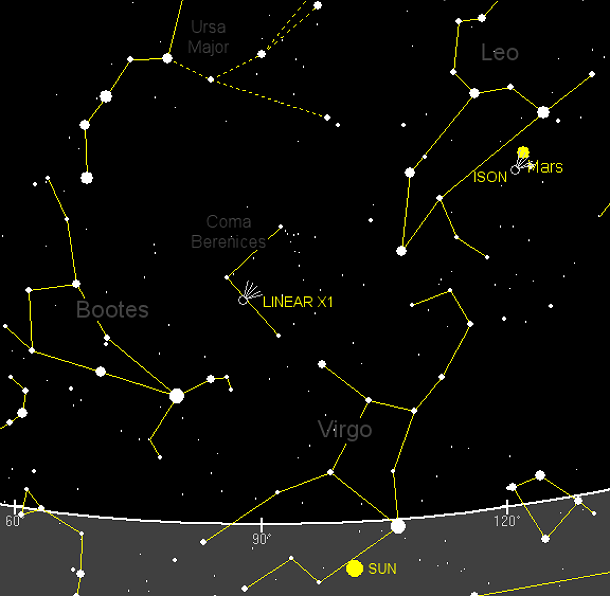 This comet is well observable for the Northern Hemisphere watchers – it will be getting higher gradually in the morning sky. But for the observers in the Southern Hemisphere, it will not be observable until February next year.

This will be the fourth comet viewable in small telescopes by early November besides Encke, ISON, Lovejoy.