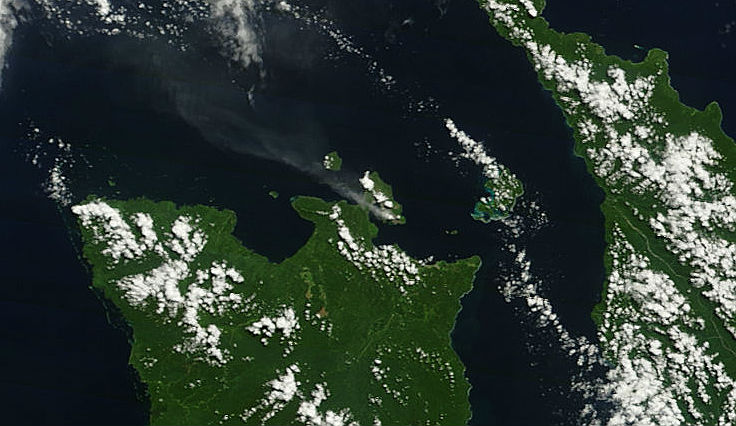 The Moderate Resolution Imaging Spectroradiometer (MODIS) on NASA’s Terra satellite captured smoke plume extending from Rabaul (Tavurvur) volcano on Papua New Guinea on July 30, 2012 at 00:10 UTC. Rabaul volcano is one of the most active and most dangerous volcanoes in Papua New Guinea.

Rabaul Volcano Observatory (RVO) reported that during July 15-21, 2013 low-level activity consisted of discrete emissions of pale gray ash plumes occurring at short intervals. Some emissions were explosive and generated plumes that rose 2 km above the crater. Plumes drifted E, NE, N, NW, W, and SW, and deposited minor amounts of ash in areas downwind mainly between Nodup and Rapolo (with Rabaul Town, 3-5 km NW, in between), and to a lesser extent in the Vulcan area. Roaring and rumbling noises also continued, often in conjunction with explosions. 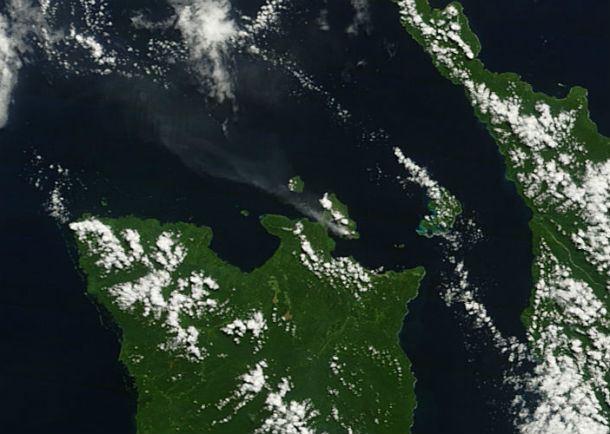 The low-lying Rabaul caldera on the tip of the Gazelle Peninsula at the NE end of New Britain forms a broad sheltered harbor utilized by what was the island's largest city prior to a major eruption in 1994. The outer flanks of the 688-m-high asymmetrical pyroclastic shield volcano are formed by thick pyroclastic-flow deposits. The 8 x 14 km caldera is widely breached on the east, where its floor is flooded by Blanche Bay and was formed about 1400 years ago. An earlier caldera-forming eruption about 7100 years ago is now considered to have originated from Tavui caldera, offshore to the north. 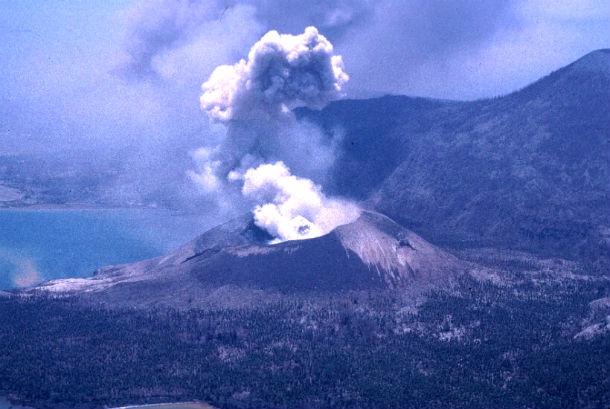 Three small stratovolcanoes lie outside the northern and NE caldera rims of Rabaul. Post-caldera eruptions built basaltic-to-dacitic pyroclastic cones on the caldera floor near the NE and western caldera walls. Several of these, including Vulcan cone, which was formed during a large eruption in 1878, have produced major explosive activity during historical time. A powerful explosive eruption in 1994 occurred simultaneously from Vulcan and Tavurvur volcanoes and forced the temporary abandonment of Rabaul city. (Global Volcanism Program)