Don't cancel your Thailand vacation just yet. Latest satellite images show oil spill is moving away from mainland and going toward popular tourist attraction Koh Kudee island but also dispersing to an extent. Blogger Richard Barrow said that some newspaper reported on Tuesday that the oil had already reached some beaches on mainland in Rayong but, no-one provided any photographic evidence…

However, what is worrying now is that it seems to have reached a group of islands dominated by Koh Kudee. These are a popular daytrip for tourists on Koh Samet to go snorkeling to see the staghorn and giant clam coral reef, he wrote on his website.

According to first reports about 50 tons of crude oil spilled into the sea off Rayong province, Thailand, on Saturday morning, July 27, after a leak occurred in a pipeline.

Ecological Alert and Recovery Thailand director Penchome Sae-Tang voiced her concern over the incident, saying the spill could have a serious impact on the marine environment if it is not cleaned up fast enough.

Sorasak Saensombat, Marine Department director-general, said on Saturday that more than 10 ships had been sent to clean up the oil slick, which was about 800 m wide and 2.5 km long. He said about 30-40% of the slick had been removed during the clean-up operations on first night and that most of the slick should be cleaned up in the next few days.

Not everybody agrees on the actual amount of oil that spilled out. Some reports mention 50 000 liters, others go up to 150 000.

Thon Thamrongnawasawat of Kasetsart University's Faculty of Fisheries urged care in the application of dispersants to contain the oil spill. He said dispersants pose some risk when used in waters less than 20 meters deep and called for authorities to release information on the chemicals and procedures used. 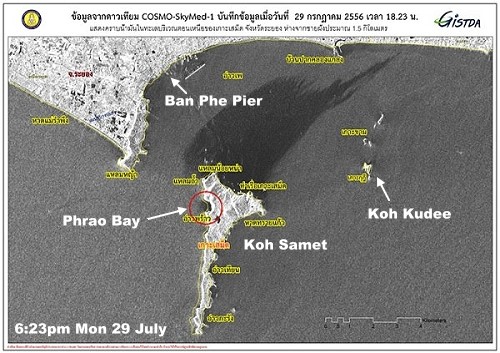 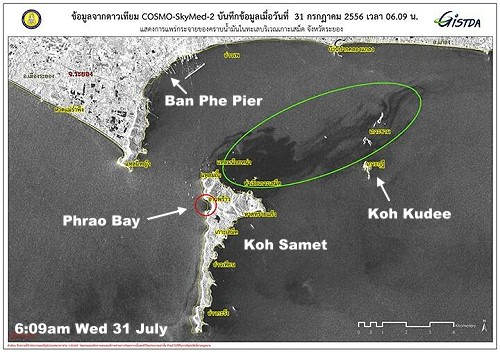 Mr. Barrow reported yesterday that the only place closed down by the oil slick is Phrao Bay (image here). The other 14 bays around Koh Samet are operating as normal. From a tourist perspective, a comment on his website gives a good picture on the situation down there:

I was on Samet today. I was there for the past week. I didn’t know anything about the oil spill until just now. There is nothing wrong with the beaches on the east coast. The only problem I had was the rain. I also read the Reuters story and they are exaggerating. It’s low season. Not usually many people there during the week. People on the east coast are not checking out because of the oil spill as many don’t know about it.