A team of scientists led by professor of biological sciences at Bowling Green State University, Scott O. Rogers, did a genetic study on the contents of half a liter of water obtained from the Lake Vostok, an underground Antarctic water reservoir. What they found was something only hoped for – life, under 4 km of ice.

Lake Vostok is largest known subglacial lake covered by more than 3,700 m of ice. The combination of cold, heat (from possible hydrothermal activity), pressure (from the overriding glacier), limited nutrients and complete darkness presents extreme challenges to life and although liquid water was hypothesized and proven earlier, scientists did not know if life was present there.

A team of Russian scientists drilled Lake Vostok last year and pierced the ice shield to the surface of the lake. 500 ml of water was analyzed by prof. Rogers' team.

In open access research article published this month on PLOS One Magazine the team wrote:

We obtained 3,507 unique gene sequences from concentrates of 500 ml of 0.22 µm-filtered accretion ice meltwater. Taxonomic classifications (to genus and/or species) were possible for 1,623 of the sequences. Species determinations in combination with mRNA gene sequence results allowed deduction of the metabolic pathways represented in the accretion ice and, by extension, in the lake.

Lake Vostok accretion ice contains nucleic acids from a diverse set of organisms, including sequences from anaerobic, aerobic, psychrophilic, thermophilic, halophilic, alkaliphilic, acidophilic, aquatic, marine and sediment-inhabiting species. The list of taxa consists of approximately 94% Bacteria and 6% Eukarya, including over 100 sequences from multicellular Eukarya. The sequences represent members of species that participate in many phases of the nitrogen cycle, as well as those that fix, utilize and recycle carbon. The higher concentrations of microbes in accretion ice compared to the overriding meteoric ice, and the presence of RNA, suggest that viable organisms exist in the lake water.

Therefore, Lake Vostok might contain a complex web of organisms, zones and habitats that have developed over the tens of millions of years of its existence. 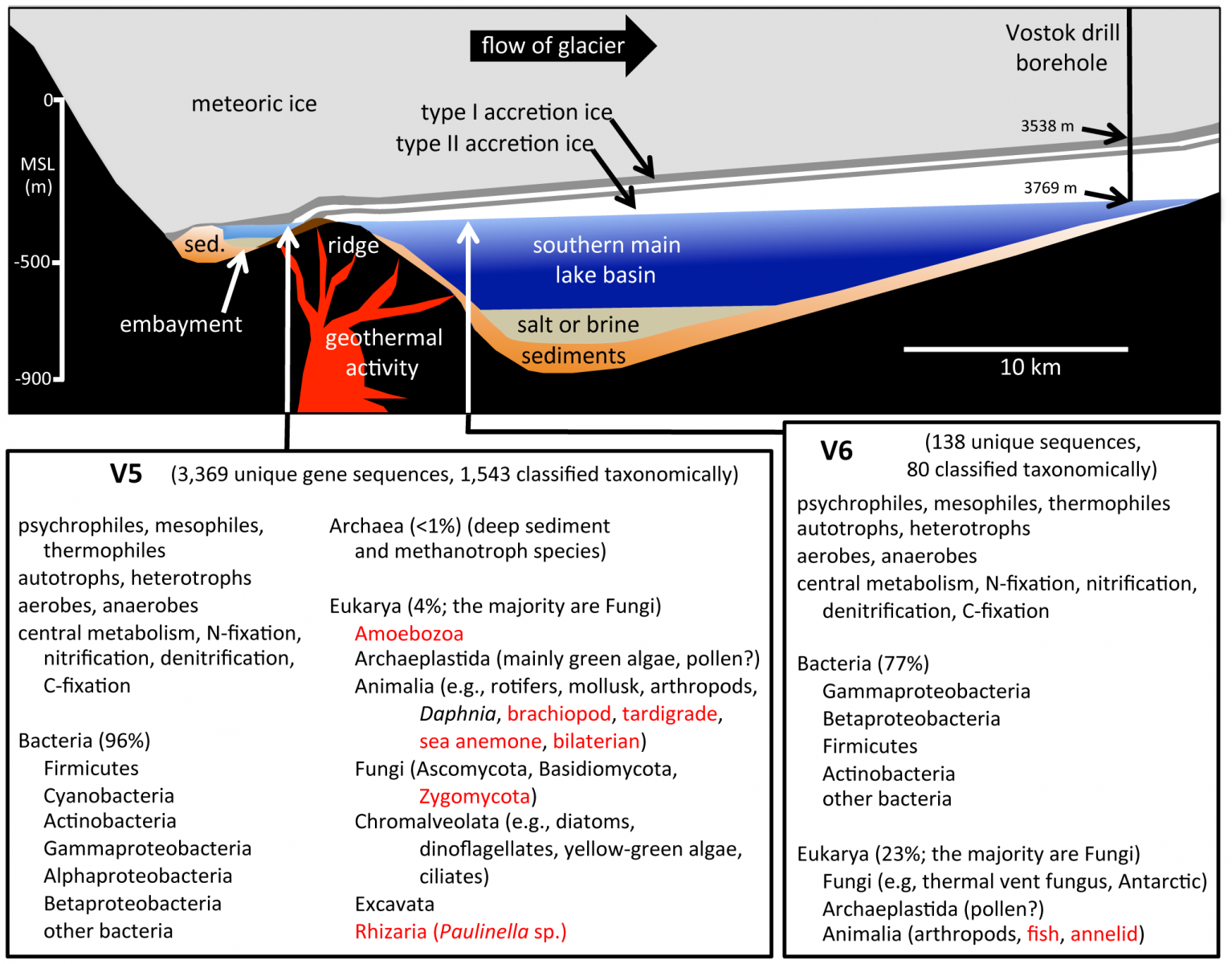 Schematic cross-section of Lake Vostok drawn to scale (based on a radar study of Lake Vostok along the glacial flow line to the ice core drill site) © 2013 Shtarkman et al.

The compilation of results suggests that organisms are living and reproducing in Lake Vostok. They also provide a detailed view of the potential life there.

Many had expected that if any life forms were to be found in the frozen crypt, they would be uniquely adapted to the harsh environment, and perhaps entirely different as a result of being shielded from evolution of life elsewhere on the planet for millions of years (RT).

"The bounds on what is habitable and what is not are changing," Rogers said for RT.

"We found much more complexity than anyone thought, it really shows the tenacity of life, and how organisms can survive in places where a couple dozen years ago we thought nothing could survive."

Confirmation of life in Lake Vostok is important for science and could strengthen the prospect for the presence of life on icy moons but the whole process of drilling was covered with controversy.

The drilling project has been opposed by some environmental groups and scientists who have argued that hot-water drilling, if used, would have a more limited environmental impact. Their main concern was that the lake could become contaminated with the antifreeze used to keep the bore hole from refreezing. The original drilling technique employed by the Russians involved the use of Freon and kerosene to lubricate the bore hole and prevent it from collapsing and freezing over; 60 short tons (54 t) of these chemicals have been used thus far on the ice above Lake Vostok.

According to the head of Russian Antarctic Expeditions, Valery Lukin, new equipment was developed by researchers at the St. Petersburg Nuclear Physics Institute that would ensure the lake remains uncontaminated upon intrusion. Lukin has repeatedly reassured other signatory nations to the Antarctic Treaty System that the drilling will not affect the lake, arguing that on breakthrough, water will rush up the bore hole, freeze, and seal the chemical fluids out. Lukin claims that hot-water drilling is much more dangerous for the microbiotic fauna, as it would 'boil' the living species, plus disturb the entire structure of water layers of the lake (Lake Vostok).