An accelerating greening rate in the Arctic

Measurements show that temperatures have risen in the Arctic over the past three decades faster than anywhere else in the world. Plant communities in tundra and boreal ecosystems in the far north experienced major changes due the longer growing season. Satellite data identify areas in the boreal zone that are warmer and drier and other areas that are warmer and wetter. According to Ramakrishna Nemani of NASA’s Ames Research Center, co-author of the study, only the warmer and wetter areas support more growth.

An international team of university and NASA scientists published an analysis of the NDVI data in Nature Climate Change in March 2013.  A key finding of this study is an accelerating greening rate in the Arctic and a decelerating rate in the boreal region, despite a nearly constant rate of temperature seasonality diminishment in these regions over the past 30 years. 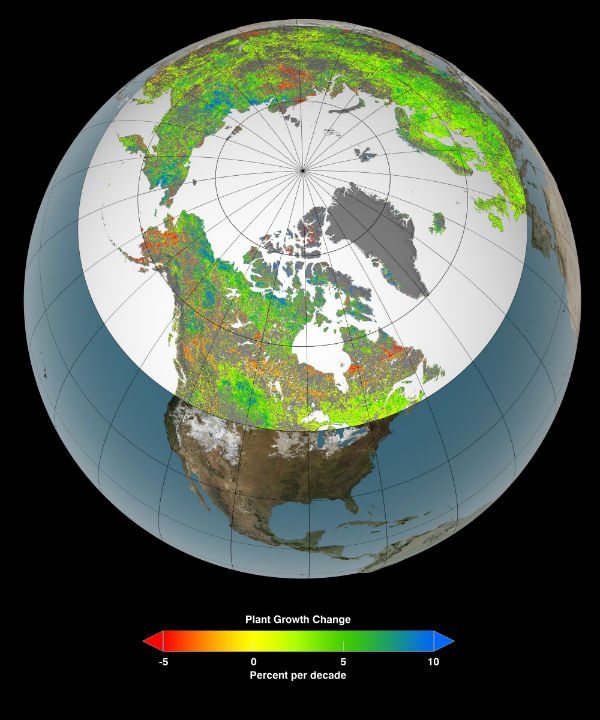 This figure shows the greening and browning of Arctic Circle. White areas correspond to vegetated lands not showing changes. Grey areas are not part of Arctic-Boreal vegetated lands considered in this study. (Credit: Climate and Vegetation Research Group)

Instruments on various NASA and NOAA satellites have continuously monitored vegetation from space for decades. The Moderate Resolution Imaging Spectroradiometer (MODIS) and Advanced Very High Resolution Radiometer (AVHRR) instruments measure the intensity of visible and near-infrared light reflecting off plant leaves. Scientists use that information to calculate the Normalized Difference Vegetation Index (NDVI), an indicator of photosynthetic activity or “greenness” of the landscape. The maps show a ring of greening in the treeless tundra ecosystems of the circumpolar Arctic—the northernmost parts of Canada, Russia, and Scandinavia. Tall shrubs and trees have started to grow in areas that were previously dominated by tundra grasses. The researchers concluded that plant growth had increased by 7 to 10 percent overall. 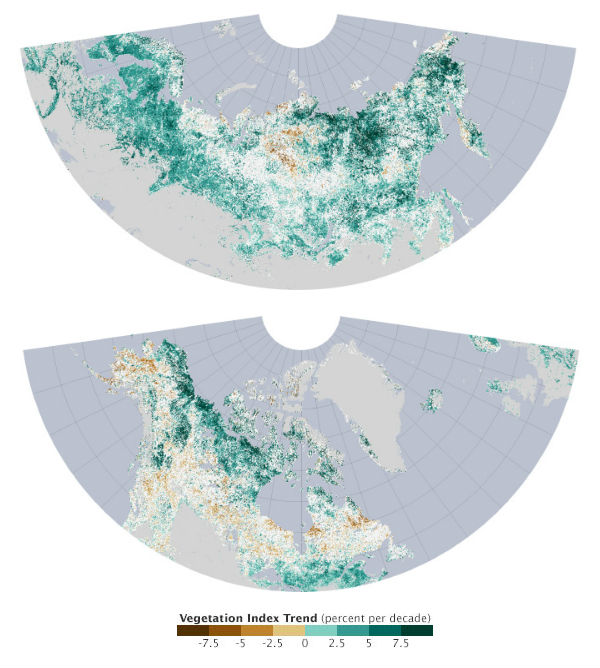 These maps show NDVI trends between July 1982 and December 2011 for the northern portions of North America and Eurasia. Shades of green depict areas where plant productivity and abundance increased; shades of brown show where photosynthetic activity declined. There was no trend in areas that are white; areas that are gray were not included in the trend analysis. (NASA Earth Observatory image by Robert Simmon, using MODIS and AVHRR data from the Boston University’s Climate and Vegetation Research Group. Caption by Adam Voiland with information from Kathryn Hansen.)

However, boreal forests to south of the tundra, particularly those in North America, show a different response to warming. Many boreal forests greened, but the trend was not as strong as it was for the Arctic Circle. In North America, some boreal forests actually experienced “browning” over the study period. Droughts, forest fire activity, animal and insect behavior, industrial pollution, and a number of other factors may have contributed to the browning.

According to Prof. Ranga Myneni, Department of Earth and Environment, Boston University and lead co-author, an amplified greenhouse effect initiated by increased atmospheric concentration of heat-trapping gasses (such as water vapor, carbon dioxide and methane) causes the Earth's surface and nearby air to warm. The warming reduces the extent of polar sea ice and snow cover on the large land mass that surrounds the Arctic ocean, thereby increasing the amount of solar energy absorbed by the no longer energy-reflecting surface. This sets in motion a cycle of positive reinforcement between warming and loss of sea ice and snow cover, thus amplifying the base greenhouse effect. The amplified warming in the circumpolar area roughly above the Canada-USA border is reducing temperature seasonality over time because the colder seasons are warming more rapidly than the summer.

Researchers pointed that the reduction of vegetation seasonality, resulting in increased greenness in the Arctic, is visible on the ground as an increasing abundance of tall shrubs and tree incursions in several locations all over the circumpolar Arctic and the greening in the adjacent Boreal areas is much less conspicuous in North America than in Eurasia.