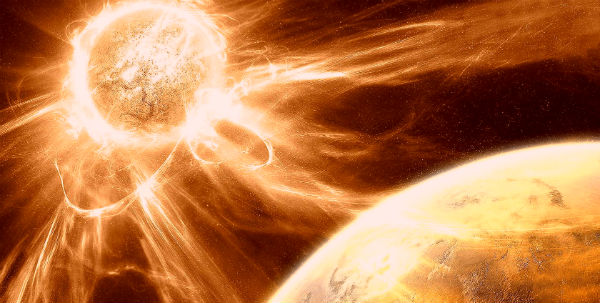 Researchers have found signs of an energy source in the solar wind, a hot and fast flow of magnetized gas that streams away from the sun’s upper atmosphere. Solar wind is made of hydrogen and helium ions with a sprinkling of heavier elements. Solar wind is the plasma of charged particles (protons, electrons, and heavier ionized atoms) coming out of the Sun in all directions. The solar wind is what blows the tails of comets back away from the bodies of comets as they go through the solar system. As solar wind leaves the Sun, it accelerates, tripling in speed as it passes through the corona.

Something inside the solar wind continues to add heat even as it blows away from the Sun into the colder space. Justin Kasper of the Harvard-Smithsonian Center for Astrophysics and his team processed the Wind solar probe’s entire 19-year record of solar wind temperatures, magnetic field and energy readings. Wind solar probe was launched back in 1994 and it is one of NASA’s oldest active spacecraft. It has lasted two complete solar cycles and innumerable solar flares thanks to its heavy shielding and double-redundant systems. And it still have fuel reserves for another 60 years. The instruments of the near-earth WIND satellite have gathered various solar wind data. 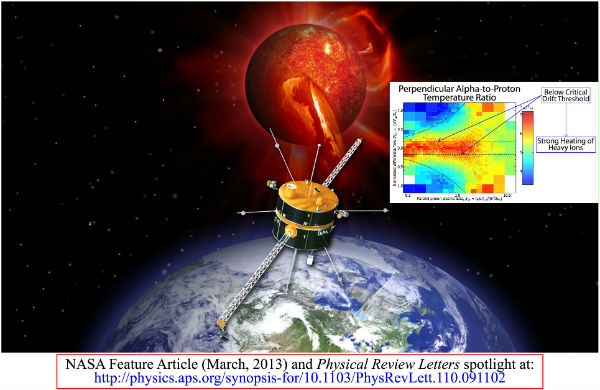 Kasper and his team revealed that the source of the heating in the solar wind is ion cyclotron waves, made of protons that circle in wavelike-rhythms around the sun’s magnetic field. According to a theory developed by Phil Isenberg (University of New Hampshire) and expanded by Vitaly Galinsky and Valentin Shevchenko (UC San Diego), ion cyclotron waves emanate from the sun; coursing through the solar wind, they heat the gas to millions of degrees and accelerate its flow to millions of miles per hour. Kasper’s findings confirm that ion cyclotron waves are indeed active, at least in the vicinity of Earth where the Wind still operates.

Ion cyclotron waves also account for some of the wind’s very strange properties. Chemical elements of the solar wind such as hydrogen, helium, and heavier ions, blow at different speeds; they have different temperatures; and, strangest of all, the temperatures change with direction. Scientists have long wondered why heavier elements in the solar wind move faster and have higher temperatures than the lighter elements. The ion cyclotron theory can explain it. Heavy ions resonate well with ion cyclotron waves. Compared to their lighter counterparts, they gain more energy and heat as they surf.

This new discovery has caught the attention of fusion researchers. Heavy ions radiate heat. Theoretically, ion cyclotron waves could be used to heat and/or remove the heavy ions, restoring thermal balance to the fusing plasma. Scientists still wonder if ion cyclotron waves work the same way deep inside the sun’s atmosphere where the solar wind is born. 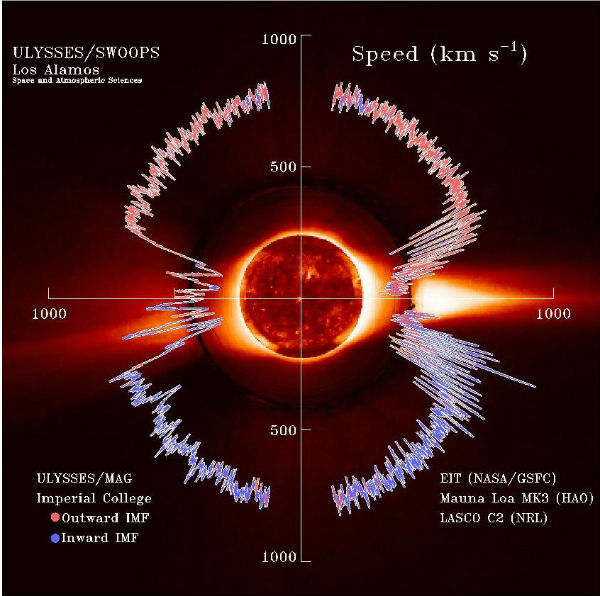 NASA is sending a new probe into the Sun by the end of this decade which will be able to test this theory. Solar Probe Plus, scheduled for launch on July 30, 2018, will sample the sun’s plasma and magnetic field at the very source of the solar wind. At closest approach, about 7 million km from the sun’s surface, Solar Probe Plus must withstand temperatures greater than 1400 deg. C and survive blasts of radiation at levels not experienced by any previous spacecraft.  It will plunge so far into the sun’s atmosphere that the sun will appear as much as 23 times wider than it does in the skies of Earth.

Coming closer to the Sun than any previous spacecraft, Solar Probe Plus will employ a combination of in situ measurements and imaging to achieve the mission’s primary scientific goal: to understand how the Sun’s corona is heated and how the solar wind is accelerated. 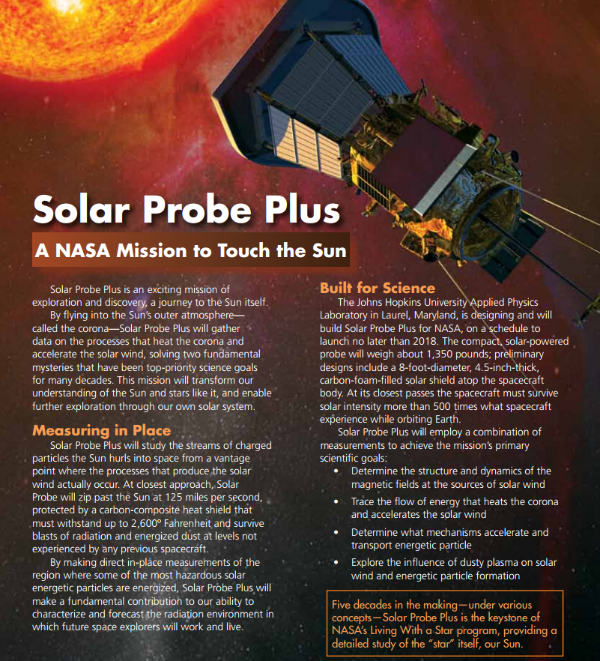 The Ulysses spacecraft completed two orbits through the solar system during which it passed over the Sun’s south and north poles. Its measurements of the solar wind speed, magnetic field strength and direction, and composition have provided us with a new view of the solar wind. Ulysses was retired on June 30, 2009.

The Advanced Composition Explorer (ACE) satellite was launched in August of 1997 and placed into an orbit about the L1 point between the Earth and the Sun. The L1 point is one of several points in space where the gravitational attraction of the Sun and Earth are equal and opposite. This particular point is located about 1.5 million km (1 million miles) from the Earth in the direction of the Sun. ACE has a number of instruments that monitor the solar wind and the spacecraft team provides real-time information on solar wind conditions at the spacecraft. 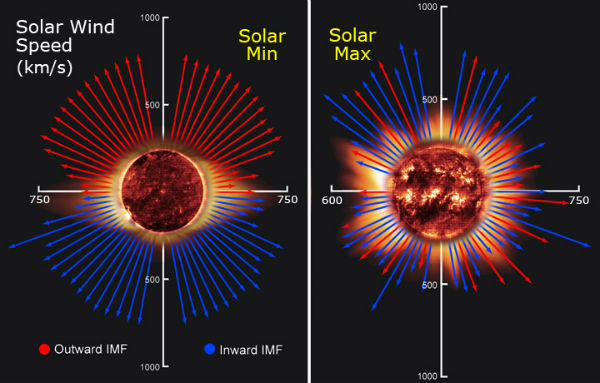 Solar wind observations collected by the Ulysses spacecraft during two separate polar orbits of the Sun, six years apart, at nearly opposite times in the solar cycle. Near solar minimum (left) activity is focused at low altitudes, high-speed solar wind prevails, and magnetic fields are dipolar. Near solar maximum (right), the solar winds are slower and more chaotic, with fluctuating magnetic fields. (Courtesy of Southwest Research Institute and the Ulysses/SWOOPS team)

The solar wind escapes primarily through coronal holes, which are found predominantly near the Sun’s poles; in the equatorial plane the magnetic field lines of the Sun are more likely to close on themselves, particularly in periods of low solar activity. These closed field lines trap the hot coronal gases, leading to enhanced X-ray emissions from these hotter regions, but suppressing contributions to the solar wind.

The solar wind can have a large influence on our planet, particularly in times of the active Sun (near sunspot maximum) when the wind is strong and can contain bursts corresponding to flares and coronal mass ejections from the Sun. The solar wind has a significant influence on our ionosphere, the Earth’s magnetic field, on Earth’s auroras, and on telecommunication systems.