Tavurvur is an active volcano that lies near the town of Rabaul in Papua New Guinea. It is a sub-vent of the Rabaul caldera and lies on the eastern rim of the larger feature. The volcano is most well known for its devastating eruptions over Rabaul. 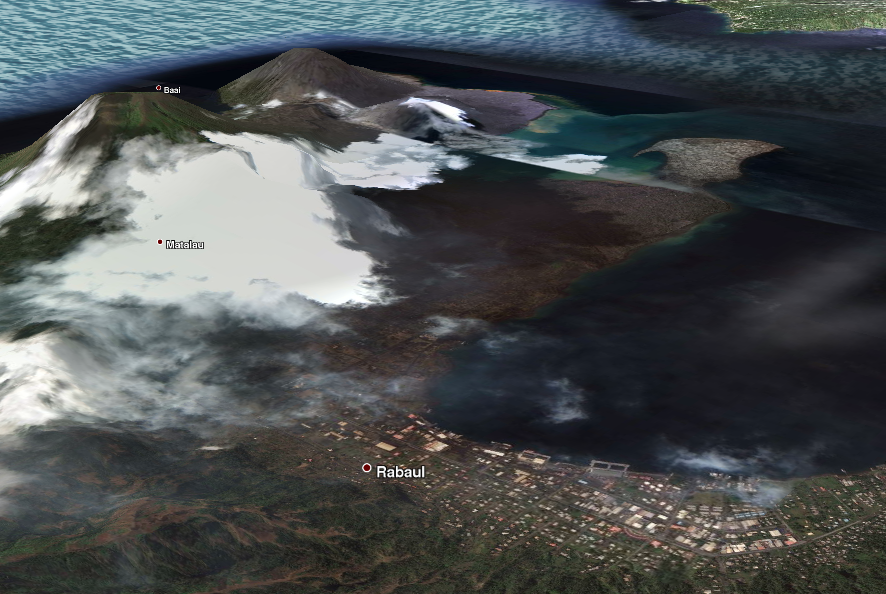 In 1937, Tavurvur and another nearby volcano, Vulcan, erupted, killing 507 people.

Rabaul Airport was completely destroyed in the 1994 eruption. The airport was in the direct path of the falling ash from the nearby vents. The airport was later rebuilt at Tokua, farther away outside the caldera to the southeast, but has occasionally been closed by ashfall from the continuing volcanic activity in the Rabaul caldera.

Since then, the young cone Tavurvur located inside the caldera has been the site of near persistent activity in form of strombolian to vulcanian ash eruptions. 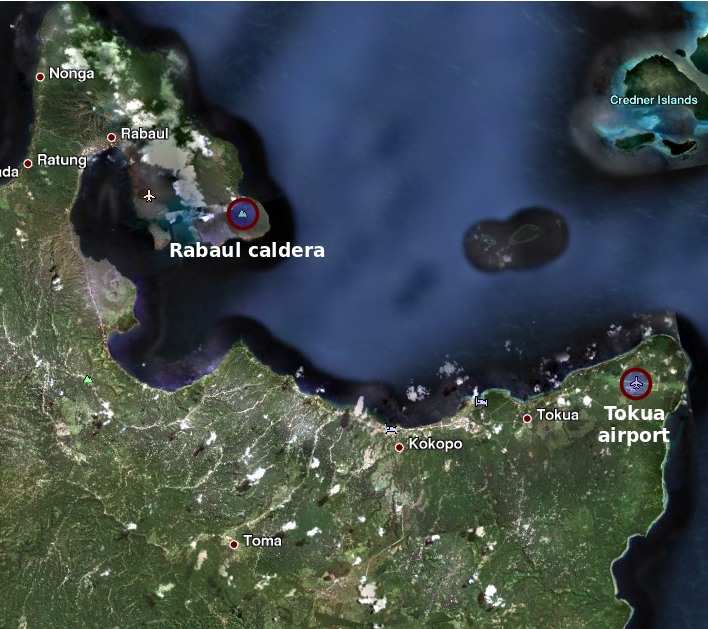 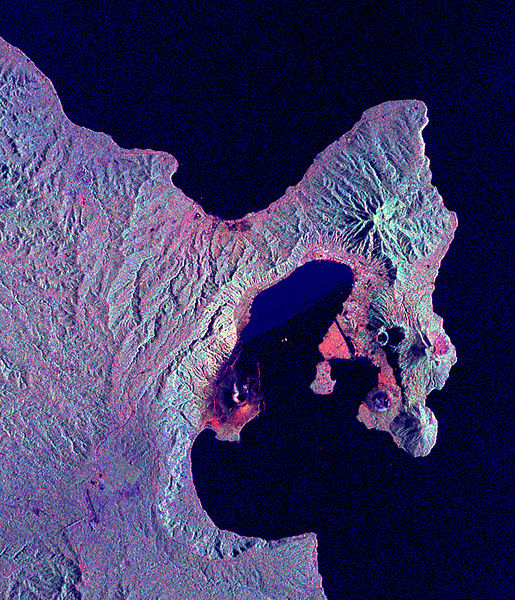 This is a radar image of the Rabaul volcano on the island of New Britain, Papua New Guinea taken almost a month after its September 19, 1994, eruption that killed five people and covered the town of Rabaul and nearby villages with up to 75 centimeters (30 inches) of ash. More than 53,000 people have been displaced by the eruption.
The image was acquired by the Spaceborne Imaging Radar-C/X-band Synthetic Aperture Radar (SIR-C/X-SAR) aboard the space shuttle Endeavour on its 173rd orbit on October 11, 1994. This image is centered at 4.2 degrees south latitude and 152.2 degrees east longitude in the southwest Pacific Ocean. The area shown is approximately 21 kilometers by 25 kilometers (13 miles by 15.5 miles). North is toward the upper right. The colors in this image were obtained using the following radar channels: red represents the L-band (horizontally transmitted and received); green represents the L-band (horizontally transmitted and vertically received); blue represents the C-band (horizontally transmitted and vertically received). Credit: NASA JPL

On October 7, 2006 the volcano erupted again, and an initial blast shattered windows up to 12 km away and sent an ash plume 18 km into the stratosphere. Fortunately this time winds blew most of the ash away from Rabaul. It erupted again in  January 2009 and August 2011.

On August 3, 2011 a message from the Rabaul Volcano Observatory said: “Since August 3rd 8:30 local time Tavurvur (Rabaul/PNG) is active again, ejecting ash clouds up to 700m high. The clouds are so dense that they need 2 hours to clear out.”

YouTube user komnairima recorded the following video of the latest eruption on January 20, 2013:

The low-lying Rabaul caldera on the tip of the Gazelle Peninsula at the NE end of New Britain forms a broad sheltered harbor utilized by what was the island’s largest city prior to a major eruption in 1994. The outer flanks of the 688-m-high asymmetrical pyroclastic shield volcano are formed by thick pyroclastic-flow deposits. The 8 x 14 km caldera is widely breached on the east, where its floor is flooded by Blanche Bay and was formed about 1400 years ago. An earlier caldera-forming eruption about 7100 years ago is now considered to have originated from Tavui caldera, offshore to the north.

Three small stratovolcanoes lie outside the northern and NE caldera rims of Rabaul. Post-caldera eruptions built basaltic-to-dacitic pyroclastic cones on the caldera floor near the NE and western caldera walls. Several of these, including Vulcan cone, which was formed during a large eruption in 1878, have produced major explosive activity during historical time.