Papuan media rightfully describe it as a major eruptive crisis – this powerful eruption is occurring in populated area and next to a city of Rabaul with nearly 20 000 people. Evacuations of some nearby villages are in progress. Kokopo, south of Tavurvur seems to have been particularly affected by ash fall.

Rabaul has erupted several times throughout the 20th Century with its last eruption happening last year. During its major eruption in 1994 five people were killed and the local airport was destroyed. PNG authorities are yet to officially comment on whether this ongoing incident poses a similar threat.

Tavurvur last appeared in GVP's weekly volcanic reports during the week of March 19 – 25, 2014:

#Tavurvur this AM, #Rabaul district affected so far, @BurnetInstitute staff all ok, hoping all closer got out #PNG. pic.twitter.com/5icUSLzEUQ

Mt #Tavurvur is erupting in #PNG, are you there? Have you got any pictures? This shot from @hhnamani #ABCnews24 pic.twitter.com/9SyJmGuuz9

The big #eruption at #Tavurvur #volcano #PapuaNewGuinea is disrupting flights spewing ashes and rocks into the air pic.twitter.com/hXI3BhM3oq

Once in a lifetime pics from today's flight home from work @7NewsBrisbane @9NewsBrisbane #Rabaul #Tavurvur pic.twitter.com/3mxIeaKN7M 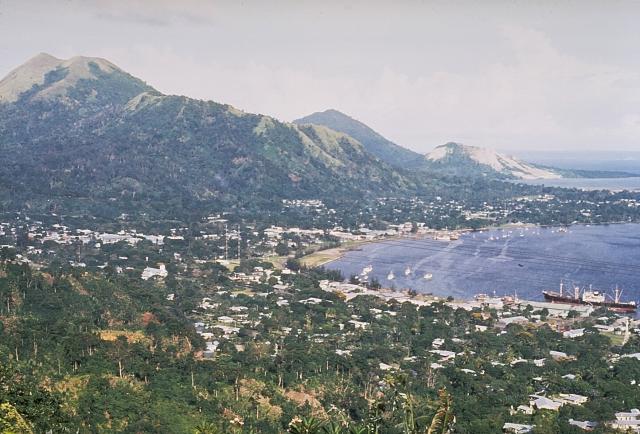 The low-lying Rabaul caldera on the tip of the Gazelle Peninsula at the NE end of New Britain forms a broad sheltered harbor utilized by what was the island's largest city prior to a major eruption in 1994. The outer flanks of the 688-m-high asymmetrical pyroclastic shield volcano are formed by thick pyroclastic-flow deposits. The 8 x 14 km caldera is widely breached on the east, where its floor is flooded by Blanche Bay and was formed about 1400 years ago. An earlier caldera-forming eruption about 7100 years ago is now considered to have originated from Tavui caldera, offshore to the north.

Three small stratovolcanoes lie outside the northern and NE caldera rims of Rabaul. Post-caldera eruptions built basaltic-to-dacitic pyroclastic cones on the caldera floor near the NE and western caldera walls. Several of these, including Vulcan cone, which was formed during a large eruption in 1878, have produced major explosive activity during historical time. A powerful explosive eruption in 1994 occurred simultaneously from Vulcan and Tavurvur volcanoes and forced the temporary abandonment of Rabaul city. (GVP)