An island ground composed of sandbanks emerged in North Sea, 24 km (15 miles) off the coast of Schleswig-Holstein in Germany’s far north. This is the area of a shallow body of water with tidal flats and wetlands. A discernible landmass composed of sandbanks grew gradually over the past few years in a stretch of coastline near marine national park Wattenmeer, mostly created by tidal actions. 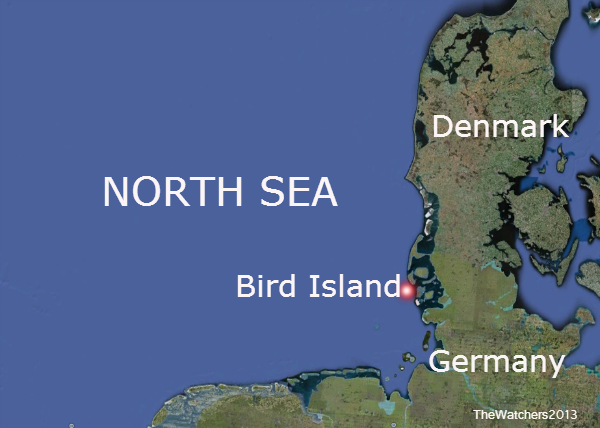 New island was named Bird Island after seabirds population which nest and feed on the sand dunes. Some of the inhabitants of an islands are the gulls, grey geese, eider ducks, common ringed plovers, peregrine falcons and more. Various seeds were blown by winds from all across the Europe and so far 49 species of plants have been detected on sandy landmass that is up to 4-5 meters high.

However, according to Martin Stock, a biologist with the National Park Management at Wattenmeer, the plants still don’t have the roots necessary to bind the dunes together and strong storm flood could wipe the island out overnight.

The island is located in an intertidal zone in the southeastern part of the North Sea. The area is typified by extensive tidal mud flats, deeper tidal trenches (tidal creeks) and the islands that are contained within this, a region continually contested by land and sea. The landscape has been formed for a great part by storm tides in the 10th to 14th centuries, overflowing and carrying away former peat land behind the coastal dunes. The present islands are a remnant of the former coastal dunes.

The islands are marked by dunes and wide, sandy beaches towards the North Sea and a low, tidal coast towards the Wadden Sea. The impact of waves and currents, carrying away sediments, is slowly changing the layout of the islands.