High tides will be extra high everywhere around the world this week because the Earth is at perihelion – the point in its orbit at which it is closest to the Sun. Occurring several times a year, king tides happen when the Earth, moon and sun align in a way that increases gravitational pull on the Earth’s oceans, raising water levels several feet above normal high tides. Combined with the peculiarities of different coastlines, they result in differing local sea levels around the world.

King tides are  above the highest water level reached at high tide on an average day. They bring unusually high water levels, and they can cause  local tidal flooding. King tides impact private property, public infrastructure, and wildlife habitat across the globe. 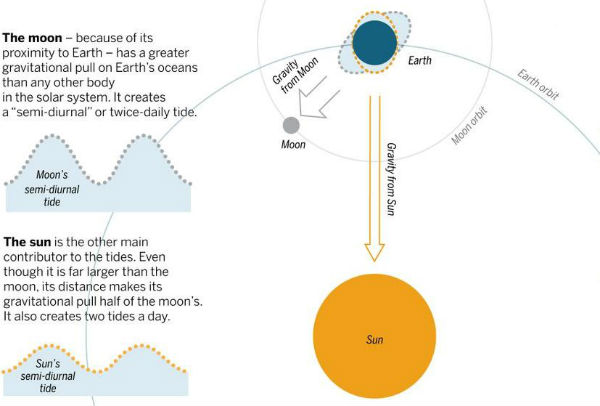 While Earth was at perihelion on January 2, this week the Moon is reaching its January’s perigee (the point during the month when it is closet to our planet). Another king tides are expected around February 7-9.

The January King Tides are occurring as a storm is reaching Southern California this year, which may increase the potential for coastal flooding. Tides are expected to be the highest this month, according to Heidi Nutters, the coastal training program coordinator at the San Francisco Bay National Estuarine Research Reserve and one of the lead statewide organizers of the California King Tides Initiative.


Sea level rise is raising the height of tidal systems over time. Average daily water levels are rising along with the oceans. As a result, high tides are reaching higher and extending further inland than in the past.

A group of concerned citizens formed the King Tides Initiative in 2009, in which people worldwide were invited to take photos of local water levels during these high tides and to share them online.

Most extreme tides of the season infographic (UT San Diego)