There is an upper level low pressure system vortex storm forming of East Coast of US. It's an occluded front with a low pressure of 29.29hg or 992mb. The winds are rotating the system counterclockwise. In previous post we gave some possible explanation of the situation and we gave some notes about polar cyclones, arctic storms, nor'eastern storms and explanation of Coriolis effect. 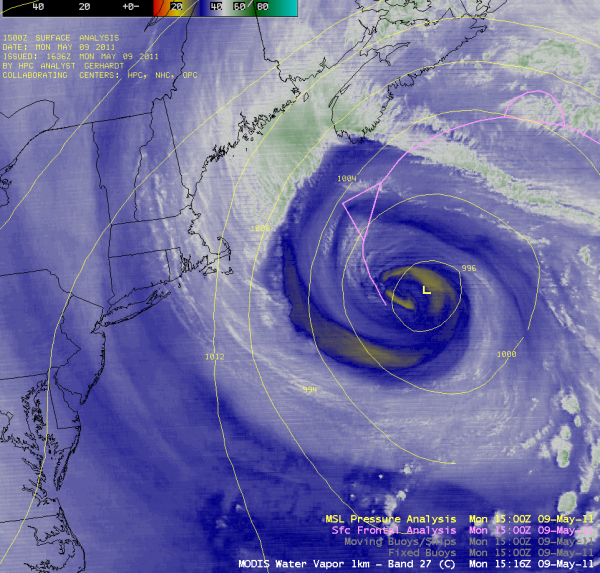 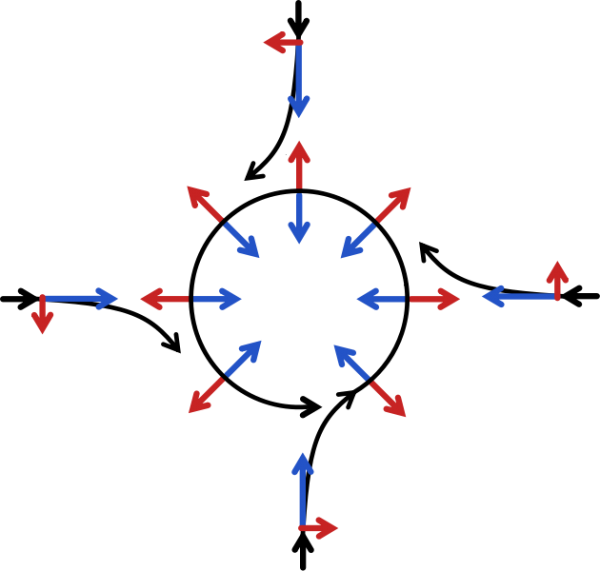 A huge forecasting problem is determining whether an upper level low will strengthen or weaken with time. When nowcasting, they are best viewed on satellite imagery. Image by image they should be monitored for intensity. When the clouds brighten (become whiter) in association with the upper level low, that is an indication the upper level low is strengthening. 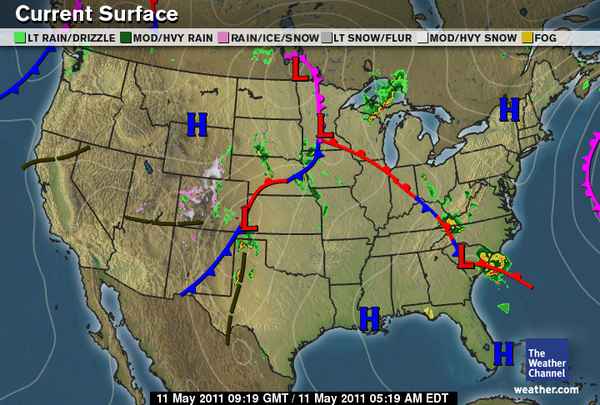 This is a low pressure strengthened and further strengthening is expected. Breaking waves in near the north US coast could reach 20 feet tall. This system is increasing in force affecting the surf as far away as the Dominican Republic this week. There is no risk of rain, but a heavy swell, which probably will be a historic show. The system probably meets up with SW system in the Midwest. More worries for flooded Mississippi valley. All that cold air being fed from Canada and all the warm air being sucked from the South. And it is headed in the complete opposite direction. It is heading South. It should be going East North East. 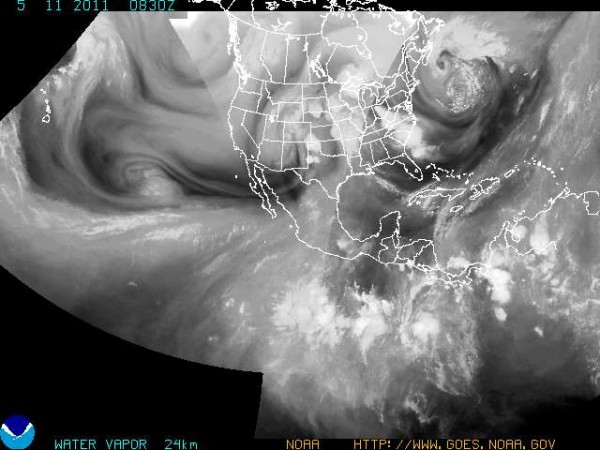 Three, possible four total systems forming on North American Continent. One Vortex Over Alaska, One Vortex in Mid West states and the Vortex on the East Coast.

Don't forget about 2 giant swirls near Guayanna coast and tropical storm Aere that is heading toward Japan.

AccuWeather forecasters warn about violent storms across US Wendsday to Thursday.

Some of the strongest thunderstorms from this afternoon and evening will linger across Tornado Alley late tonight into Thursday morning. As is the case today, a greater number of potentially damaging thunderstorms will then ignite on Thursday afternoon. Thursday's severe weather threat will lie slightly east of today's zone, stretching from Iowa to South Texas. Spottier, but still violent thunderstorms will reach the flooded lower Mississippi Valley on Thursday. More numerous thunderstorms, however, will deliver unwanted rain on Thursday night into Friday.

Strong thunderstorms could rattle a zone from Cincinnati, Ohio, to Myrtle Beach, S.C. into tonight. The threat for severe weather on Wednesday will extend from the western Great Lakes southwestward to southwestern Texas. A wedge of dry air will delight much of the Northeast this week. However, wet weather will return in time for the weekend. Another system nearing the southern High Plains will trigger strong thunderstorms from western Oklahoma into central Texas later today into tonight. Areas from Texas to Illinois and southern Wisconsin will be the primary focus of the storms with this severe weather outbreak that will include large hail, damaging straight-line wind gusts and a couple of handfuls of tornadoes. 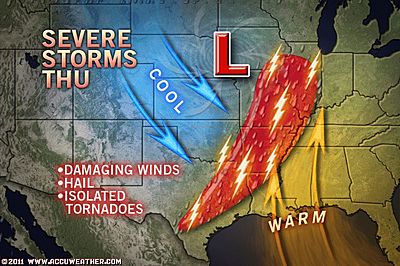 During the past week or so, weather systems moving along through the Midwest have not had access to Gulf of Mexico moisture, which is a key ingredient for the nastiest of thunderstorms known as supercells. These supercells are the main producers of tornadoes. During the severe weather outbreak this week, the Gulf of Mexico will be open and will add in the necessary ingredient for the violent storms. This outbreak has the potential to produce a couple dozen or so tornadoes, a few of which could be strong, and should be taken seriously. 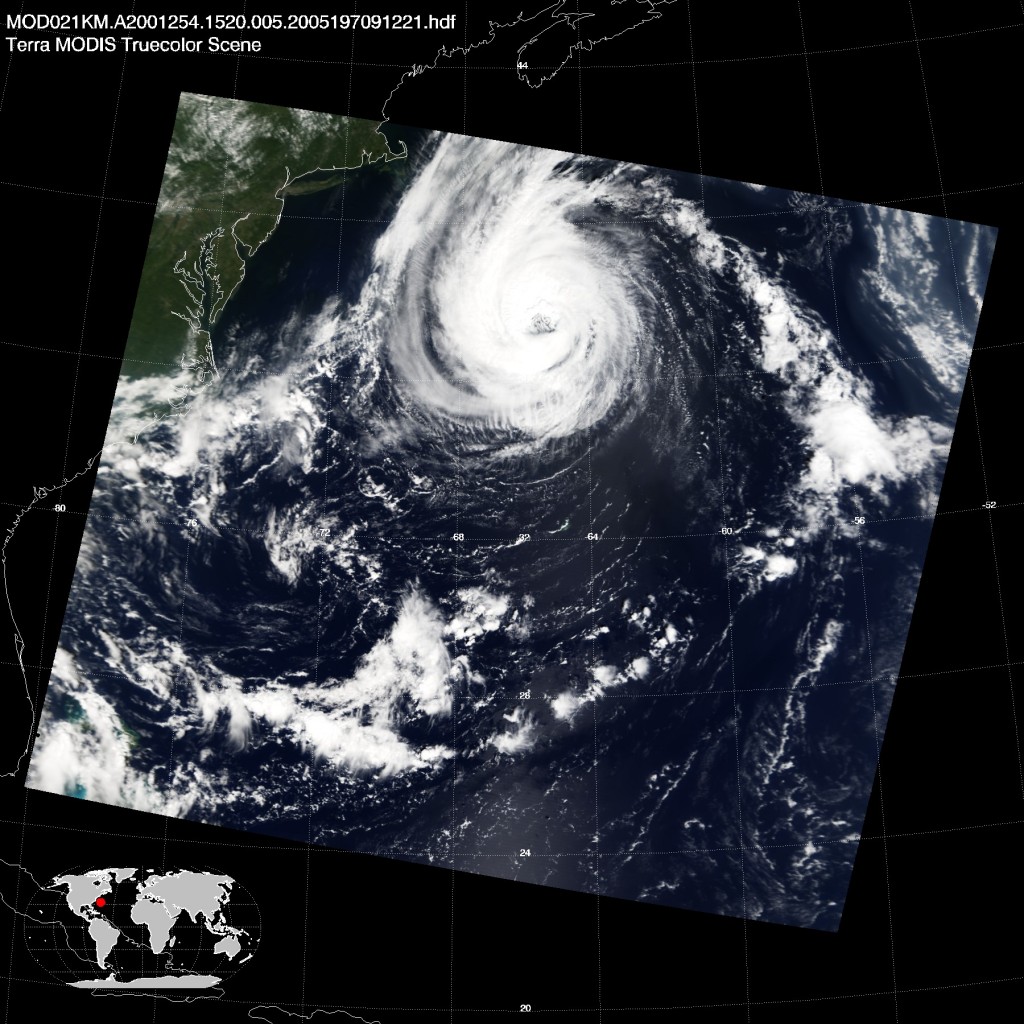 Two dams in North China's Inner Mongolia collapsed on Sunday, July 18, 2021, after heavy rains falling since Saturday. Local citizens were evacuated before the collapse and while material damage is huge, there are no reports of casualties. The combined water...

Farmers across Brazil are reporting widespread crop loss due to severe frosts affecting the country over the past 3 weeks. After several destructive cold waves, another blast is expected over the weekend, July 24 and 25, followed by yet another at the end of the...