Tropical Cyclone Narelle is spinning out to sea west of Western Australia as it reached Category 3 status with wind gusts near center at 285 km/h (177 mph). Narelle is moving slightly southwestward and will maintain that bearing for the next few days before heading due south and rounding the continent’s southwest in the coming days. The storm’s bands to the southeast are drawing desert sand off land out into the Indian Ocean. Meanwhile, Australia is battering with catastrophic bushfires after unprecedented record-high temperatures. The high temperatures and dryness of the region create prime conditions for fires. 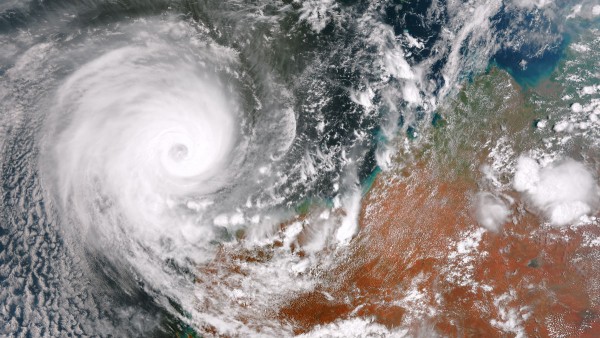 This image was taken by the NASA/NOAA Suomi NPP satellite’s VIIRS instrument around 05:40 UTC on January 11, 2013. (Credit: NOAA/NNVL)

According to latest Joint Typhoon Warning Center (JTWC), TC Narelle is located approximately 335 nm north-northwest of Learmonth, Australia and is moving west-southwestward at speed of 6 knots. Narelle is tracking along the northwestern periphery of a deep-layered subtropical ridge anchored over south-central Australia. Narelle has peaked in intensity and should gradually weaken mainly due to increasing vertical wind shear and cooling sea surface temperatures. 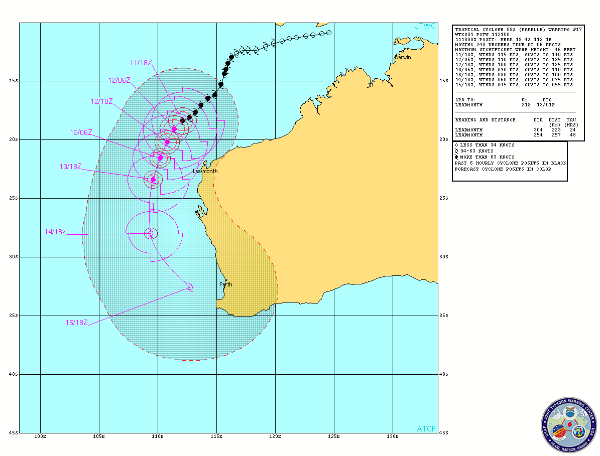 According to latest report by Australian Bureau of Meteorology (BoM), severe Tropical Cyclone Narelle is expected to continue moving to the south to southwest and pass west of the Northwest Cape over the weekend. Gales with gusts to 100 kilometres per hour could develop in coastal areas between Mardie and Exmouth during Saturday, then extend south to Cape Cuvier later on Saturday. On Sunday gales may extend south to Denham and winds along the west Pilbara coast should ease from the east later in the day. Thunderstorm activity in western parts of the Pilbara could be squally with isolated heavy falls. This activity will extend into far northwestern Gascoyne over the weekend. 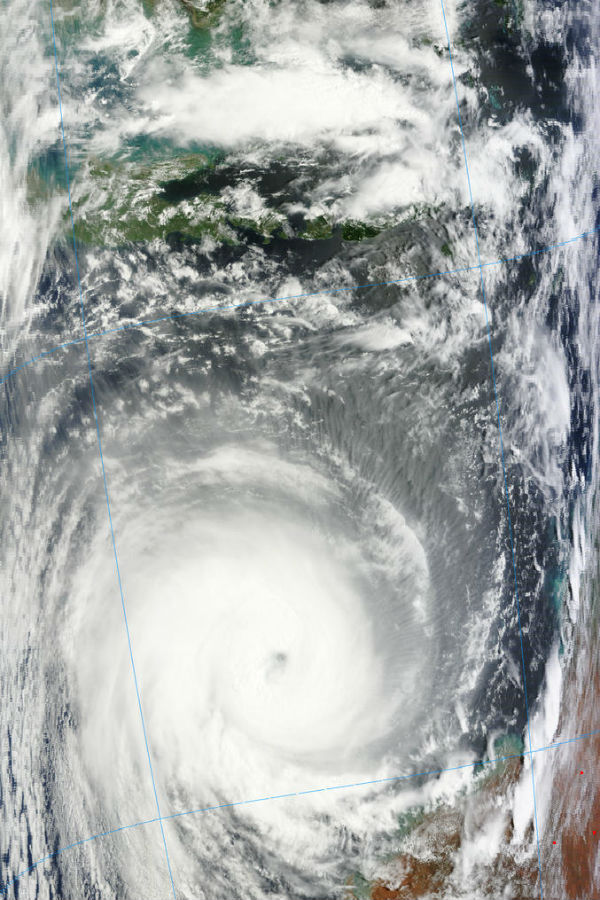 Tides along the west Pilbara coast are likely to rise above the normal high tide mark Saturday morning and again Saturday night with flooding of low-lying coastal areas possible. Higher than normal tides should extend along the west coast later Saturday and into early next week.

Huge swathes of sand and dust (possibly from the dry parts of Western Australia’s Great Sandy Desert, Gibson Desert and Tanami Desert), pulled by strong winds in the Indian Ocean, dropped near the town of Onslow  in the Pilbara region, in  northwestern Australia. Ships at the sea were dwarfed by the huge cloud of dust. Reports from tugboat workers said that visibility was reduced to just 100 metres and the swell rose to two metres.

“In 18 years of meteorology, I’ve never seen a white shelf cloud capping the brownish dirt from the haboob.  If there was a hall of fame for weather photos, this one would get in on the first ballot.” Jonathan Erdman, meteorologist for The Weather Channel

However, according to ABM’s manager of climate services Glenn Cook, the dust storm was not directly related to the cyclone – the centre of which is still hundreds of kilometres away. Wind gusts in Onslow reached 101.3 km/h (63 mph) and the dust storm was made worse by the lack of rain in the region. Wind and rain caused the storm to dump the sand and dust it had ingested while passing Onslow. Steve Brooks, from Perth Weather Live said the bright red colour in the storm is unrelated to the massive bush fires across Australia this week. Instead, the red dust and iron ore which covers the Pilbara region are believed to have caused the vivid colour. 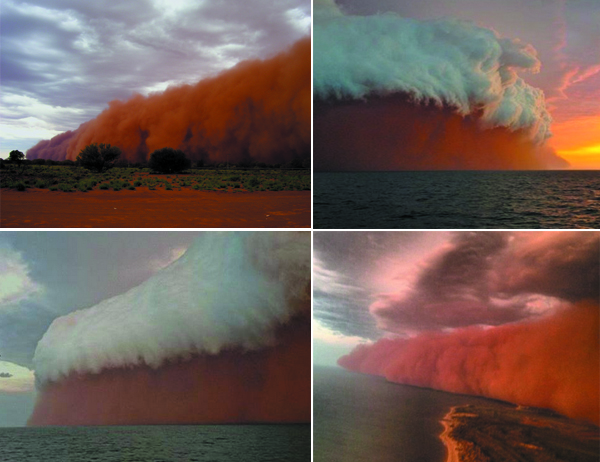 Dust storms are quiet common phenomenon in arid and semi-arid regions. Loose sand and dirt from a dry surface are blown by the strong winds and transported from one place and deposits it in another. Particles become loosely held mainly due to drought or arid conditions. Drought and wind contribute to the emergence of dust storms, as do poor farming and grazing practices by exposing the dust and sand to the wind. Dust storms can carry large amounts of dust, with the leading edge being composed of solid wall of dust as much as 1.6 km (0.99 miles) high.

On September 23,2009  a dust storm that started in South Australia and inland New South Wales, Australia, blanketed New South Wales with reddish-orange skies. It stretched as far north as southern Queensland and as far east as New Zealand. Another huge dust storm, originating in the Mallee region of Victoria, Australia covered the city of Melbourne on February 8, 1983.

The Australian region tropical cyclone season runs from 1 November to 30 April. Cyclones sometimes occur outside this period, mainly in the Central Indian Ocean southwest of Sumatra.