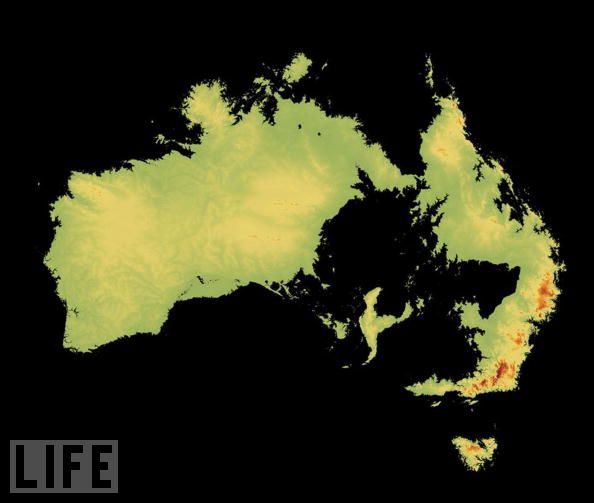 Australia’s major cities are all coastal. Confirmed sea level rises, combined with ongoing severe coastal erosion, have been worrying people for the last decade. It’s now looking like the famous Australian beachside lifestyle is riding on the tides.
The problem is that Australia has been glued to the coast, with inland development relatively slow. Much of the coast is based on sandstone and big sediment-based cliffs, which are as prone to erosion as California’s notorious hills. They’re basically big sand dunes, with little or no resistance to hits from big tides. Some areas have seen large areas of coastline literally dissolving. Many coastal councils are already introducing restrictions on coastal development, much to the annoyance of landowners and developers. It’s an emerging pattern in one of the world’s biggest luxury home markets, which stretches quite literally around Australia. That’s just the start of the problems. All of Australia’s big cities are on river valleys, meaning they’re quite close to the water table in many places. Water does find its own level, and any significant rise in sea levels would reset the water table levels, as well as changing the relationship between the river levels and the sea. 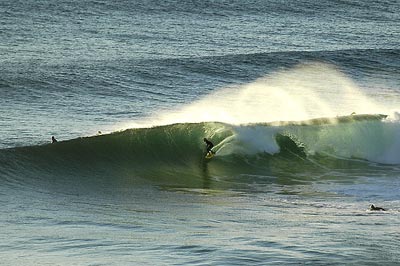 Sydney is considered to be the city most at risk. The city is honeycombed with tunnels and low level areas around the foreshores. Manly and other beachside suburbs contain quite low-lying areas. They’re in much the same situation as the Pacific islands, which have been experiencing uncharacteristic tidal effects swamping villages which have never been known to flood before.
The statistics for Australia are grim, and looking very expensive. One figure states that 35,000 km of road and rail are at risk. NSW and Queensland have an estimated risk to 140,000 homes valued at $72 billion. Confirmed sea level rises off Sydney are only 1.8 mm per year, not a lot until you realize that king tides and storm surges multiply the baseline level. If you’ve ever lived right on the coast, you naturally pay attention to how those big seas behave. Big seas can hit hard and without warning, and that’s under normal conditions. Abnormal conditions are able to trash coastal roads quite easily, and Australia’s roads, which are based on the old road building pattern of “build on the flat wherever possible”, are therefore vulnerable. They were originally simple two lane roads, now they’re highways, but they’re in the same position. Highway 1, which runs clear around Australia’s coast, is a case in point. Brisbane and Perth are both on big, low lying river valleys. Perth is built on a system of river flats, not far above sea level. Brisbane has a combination issue of monsoon weather like the big floods recently and a generally low lying main urban area. 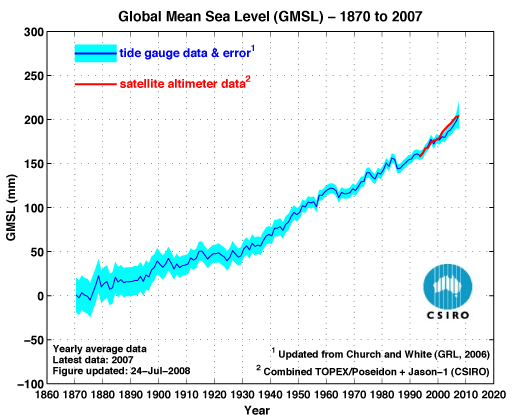 Sea level rises do present a real danger, and if combined with big tides or surges, the risk is compounded. The dollar values of relocation could be in the trillions, and at least in the hundreds of billions. Just moving the cities would be an epic of expenditure and a huge hit on revenue. Australians can see the damage to their coastline any day of the week.  “Slow moving tsunami” would be another expression. Australian coastline fronts three big oceans- The Southern Ocean, which is capable of generating 60 meter waves, the Pacific, which must be one of the least appropriately named oceans in the world during cyclone season, and the relatively quiet but earthquake prone Indian Ocean.
LIFE Magazine has a picture of projected effects of sea level rises on Australia based on a 200 meter rise in sea level. The country looks like an archipelago. Hopefully it won’t get that bad, but a lot of the inland is simply underwater. South Australia and western Victoria are practically wiped off the map. Half of New South Wales on the inland side is gone, including Broken Hill, where BHP Billiton began. This won’t happen overnight, but prehistoric data indicates that it can happen, particularly in interglacial periods. The global effect of a 170 meter rise is a direct hit on some of the most highly populated, capital-intensive areas on Earth. Sea levels rise and fall. They were falling for millions of years, and it looks like the pendulum is going back the other way. (DigitalJournal)