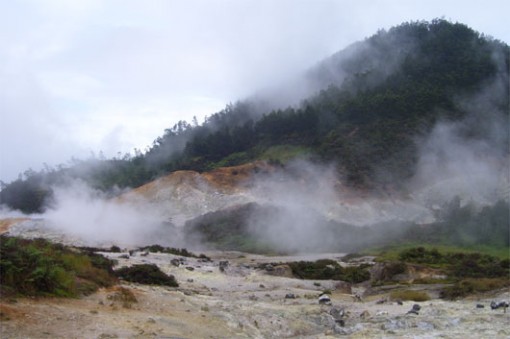 The level of carbon dioxide concentration measured in the air at Timbang, one of Mount Dieng's six craters, is two times higher than what is considered safe. On Sunday morning, the crater released thick clouds that spread approximately 100 meters towards the south and the main road connecting Wonosobo and Banjarnegara districts.

Five new earthquake detectors had been installed around Mount Dieng to monitor activities of three of its craters- Kepakisan, Karangetah and Pasorenan. The detectors are vital in not only detecting ground movement, but also toxic gases released from below. Locals have been instructed to remain in evacuation shelters and no one is permitted within a 1-kilometer radius of the crater. 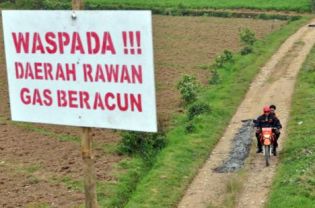 Earthquake detectors placed around Mount Dieng in Central Java have been stolen, an official said on Friday.

In order to continue monitoring the area, where one of the volcano's six craters has recently begun spewing poisonous levels of carbon dioxide, the Volcanology and Geological Disaster Mitigation Agency (PVMBG) will immediately retrieve three more earthquake detectors from Bandung to replace the missing ones. Mount Dieng is an active volcano with six craters: Condradimuko, Siglagah, Sikidang, Sileri, Sinila and Timbang. All six craters have the potential to erupt and release poisonous gas. (JakartaGlobe)