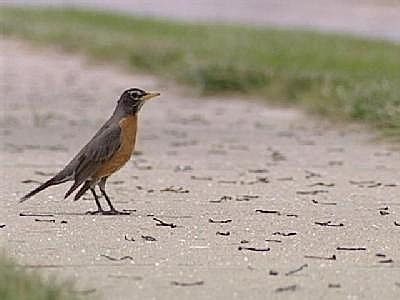 People across the Tri-State awoke to an unusual sight Thursday – thousands of earthworms lying dead on sidewalks and porches. WLWT was first alerted to the issue by Rick in West Chester.

WLWT reporter Brian Hamrick began taking photos from his home in Florence, where thousands of worms coated the sidewalks of his neighborhood. After one post on Facebook, more than 90 people said they had seen the same thing, from Fairfield to Mount Airy, Pleasant Ridge, Independence and Sardinia. WLWT even got confirmation from its sister TV station in Louisville that they had a few hundred dead worms on their sidewalk. WLWT went in search of an answer as to why so many worms died all at once.  Lee Townsend, an entomologist at the University of Kentucky, said there could be three reasons: the recent heavy rains, mating season or acidic soils. With no rain in the last week, it’s likely that isn’t the culprit. Acidic soil is also unlikely because the worm deaths were reported over such a large area.

“As they come to the surface to pair off and mate in the spring, that’s a reason that gets them up and moving around,” Townsend said. “The worms come out and get caught on things that are hard for them to crawl across, like sidewalks and driveways, and sometimes the streets.“(WLWT)

ModernSurvivalist reporting about thousands upon untold thousands of earthworms coming out of the ground from Louisville to Cincinnati to Dayton to Cleveland, which have subsequently ‘fried’ on the surface from the rays of the sun. Some local mainstream media outlets are reporting that the cause of the earthworm die-off is from heavy rain or acidic soil. Another explanation is that it is mating season for earthworms (the Spring), when they often come out of the ground and get trapped on the concrete or hard surfaces, and eventually die from the sun’s rays. It suggested on his blog that it could be mysterious electrical current within the ground that is zapping the worms up to the surface. Or  earth tremors, low enough in frequency but enough to ‘frighten’ the worms out of the ground.