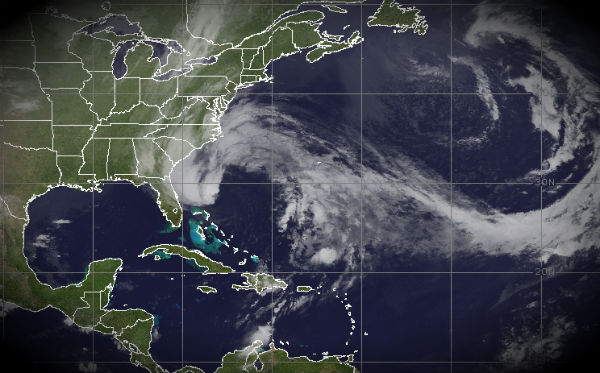 On October 26, 2012, Hurricane Sandy churned over the Bahamas, with the eye of the storm near the island of Grand Bahama. Destructive Sandy is gradually pulling away from the Bahamas, leaving more than 40 dead behind. As it approaches US East Coast, states of emergency have been declared in North Carolina, Virginia, Maryland, and New York. 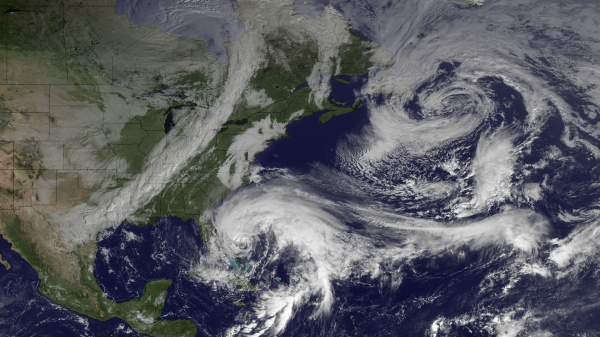 According to the latest public advisory by U.S. National Hurricane Center (NHC)  Sandy is a Category 1 hurricane with maximum sustained winds of 120 km/h (75 mph) and it’s located about 190 km (120 miles) N of Great Abaco Island and about 600 km (375 miles) SSE of Charleston South Carolina.

At 06:00 UTC on October 27 an Air Force Reserve hurricane hunter aircraft located the center of the system near latitude 28.1 north and longitude 76.9 west. The National Weather Service is adding more radionsonde launches (four times a day instead of twice day), which is very rare. 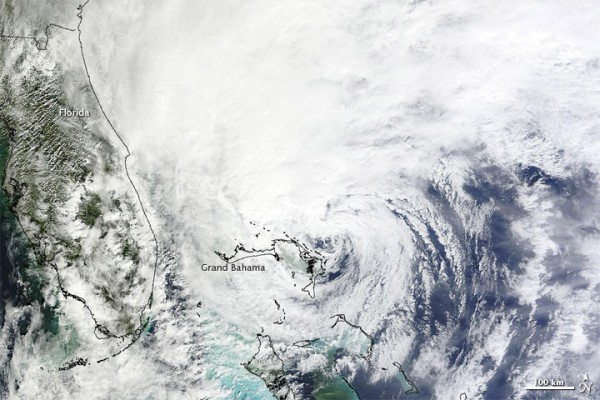 The NHC five-day track showed Sandy heading northeastward over the Atlantic Ocean until October 29, when the storm was predicted to turn northwest and make landfall along the U.S. East Coast. 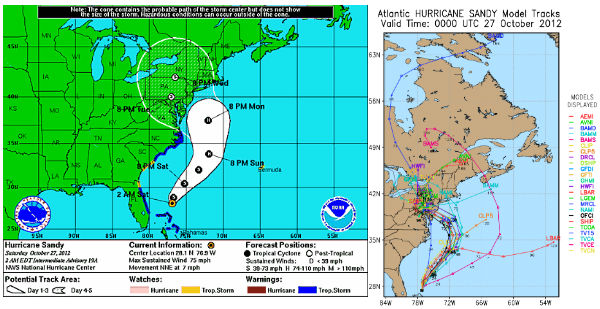 Sandy is expected to merge with other weather systems and potentially come ashore over one of the most densely populated regions of the United States. The storm also had the potential to produce snowfall in southwestern Virginia and in West Virginia.

The worst of the rare and dangerous storm will be Monday through Tuesday. Conditions will deteriorate from the mid-Atlantic to southern New England Sunday and Sunday night.

Storm surge flooding will occur over a much larger area, when compared to a hurricane and more severe than a typical nor’easter. It is likely to be more than just a few waves over washing the seawall in the hardest-hit areas according to AccuWeather. Communities, neighborhoods, roads, rail yards, subway stations and other low-lying areas near the coast, generally north of the track can take on feet of salt water. 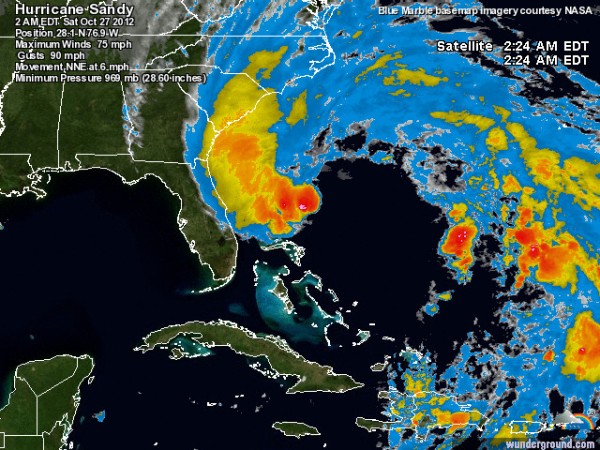 A Tropical Storm Warning is in effect for Florida East Coast from north of Jupiter Inlet to Saint Augustine, South Santee River to Duck including Pamlico and Albemarle sounds, Great Abaco and Grand Bahama Islands.

A Tropical Storm Watch is in effect for Savannah River to South Santee River, Florida East Coast from north of Saint Augustine to Fernandina Beach and Bermuda.

Storm and high wind watches are in effect for areas north of the Tropical Storm Warning area.

The combination of a dangerous storm surge and the tide will cause normally dry areas near the coast to be flooded by rising waters. Surge-related flooding depends on the relative timing of the surge and the tidal cycle and can vary greatly over short distances. The full moon on October 29. will add to high tide levels.

Heavy rain, powerful winds over a long period and storm surges north of the low center could make the Perfect Storm look like a zephyr, according to World Weather Post. They called it “a huge event”.

Dangerous surf conditions are occurring from Florida through the Carolinas and will continue for the next couple of days. These conditions are expected to spread into the mid-Atlantic and northeastern states over the weekend.

First time after 1947, unusual warm ocean temperatures are recorded through September and October which will enable Sandy to pull more energy from the ocean and help to increase rainfall because of high evaporation. Weather Underground forecaster, Dr. Jeff Master expect Sandy will dump the heaviest October rains on record over a large swath of the mid-Atlantic and New England.

An upper level trough is approaching from the west and the interactions between the two will cause Sandy to morph into a hybrid storm, expand,  and intensify rapidly. Sandy will grow larger, but the pressure will fall, and the winds will increase. AccuWeather forecasters called this system a “large nor’easter on steroids”. 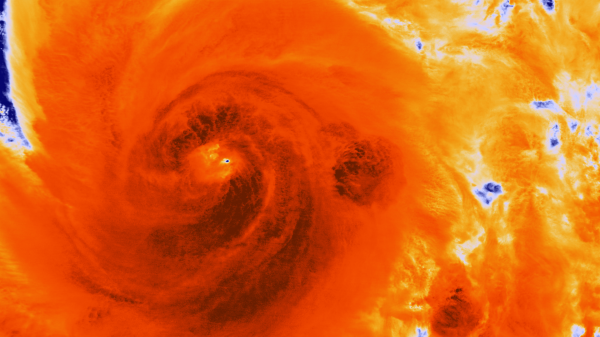