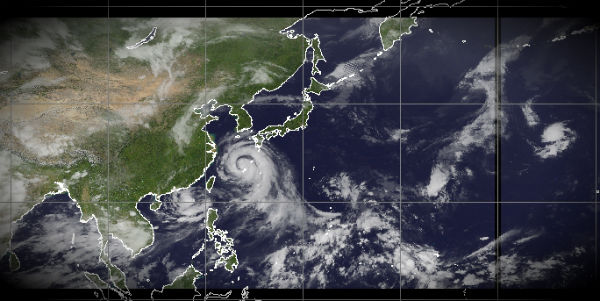 Two powerful “twin” typhoons are raging in west Pacific waters. Typhoon Bolaven, 15th typhoon of the season, is packing winds up to 260 kilometers per hour. It is expected to make landfall in North Korea on August 28. The twin typhoons are likely to rotate around each other if they get close (about 1,500 kilometers), bringing strengthened power. Increasingly dangerous strong Category 3 Typhoon Bolaven is heading for the Okinawa-Ryukus Islands off southern Japan within the next 12-18 hrs, forecast to strengthen closer to Super Typhoon status. The system have been interacting with a smaller, compact Category 1 Typhoon Tembin off the southwestern coast of Taiwan. Both will gradually influence the effects of one another as indicated in a ‘Fujiwhara effect’ between two opposing forces.

Typhoon 16w (Bolaven) is located approximately 17 nm north- northeast of Kadena AB, Japan, has tracked west-northwestward at 10 knots over the past six hours. Although Bolaven had little impact this week, it is likely to make landfall in Zhejiang or head to northern parts of the country on Monday, Zhang said.

If the violent cyclone moves north, Northeast China’s Liaoning province may face severe flooding, according to the Liaoning Provincial Flood Control and Drought Relief Headquarters. In the coming 10 days, the two typhoons will bring torrential rain and gales to Guangdong, Fujian, Zhejiang, Jiangsu, Shandong, Liaoning, Jilin and Heilongjiang provinces and Shanghai, with the maximum precipitation volume reaching 300 millimeters, according to the weather forecast released by weather.com.cn on Friday. The temperature will decrease by 3 to 8 C in most parts of the country at the end of August, the forecast said.

Satellite imagery showed convection was deepening around an increasingly organized eye. Tembin is predicted to strengthen over the next 24 hours, as well as turn to the east and re-cross Taiwan sometime between August 27 and 28. Floodwaters from Tembin reached 3 meters (9 feet) high in some areas.

Tembin made landfall in Taiwan on Friday and entered the South China Sea later on the day, bringing waves with a maximum height of 8 meters. Torrential rains and strong gales brought by Tembin will linger in Fujian and Guangdong provinces before the end of August.

Typhoon 15w (Tembin) is located approximately 360 nm southwest of Taipei, Taiwan, has tracked southeastward at 05 knots over the past six hours. Animated infrared satellite imagery indicates a significant weakening trend over the past six hours due to increasing vertical wind shear associated with equatorward outflow from Typhoon Bolaven. This interaction is clearly evident in recent animated water vapor imagery.

The greatest impacts from Tembin were felt across Pingtung and Kaoshiung counties, where widespread rainfall amounts of 500 mm (19.68 inches) have fallen over much of Pingtung county with the town of Checheng reporting 625.5 mm (24.6 inches) over a span of just 20 hours, according to the Central Weather Bureau.

Tembin is expected to remain a typhoon as it slowly spins over the Taiwan Strait over the next 24-36 hours. A change in the upper-air pattern will push the system eastward and back over the southern tip of Taiwan by Monday. This will bring more rain and wind to the already inundated region. 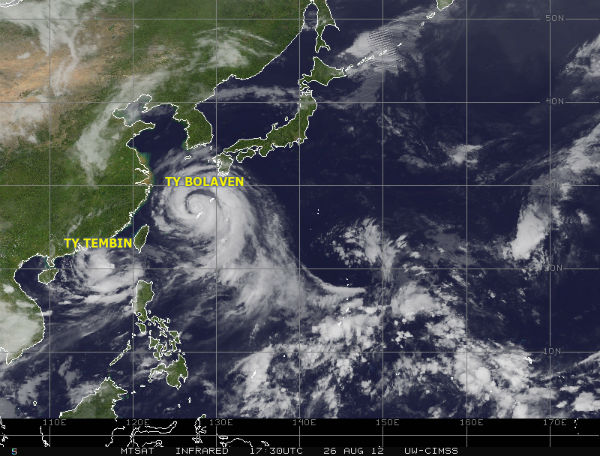 The interaction between the severe typhoons Tembin and Bolaven, known as the Fujiwhara effect, will bring torrential rains, strong gusts of wind and rough seawater to the southeastern parts of China. The Fujiwhara effect adds a layer of difficulty in predicting the routes of the two storms.

When the cyclones approach each other, their centers will begin orbiting cyclonically about a point between the two systems due to their cyclonic wind circulations. The two vortices will be attracted to each other, and eventually spiral into the center point and merge. When the two vortices are of unequal size, the larger vortex will tend to dominate the interaction, and the smaller vortex will orbit around it.

The effect is often mentioned in relation to the motion of tropical cyclones, although the final merging of the two storms is uncommon. The effect becomes pronounced in these storms when they approach within about 1,500 km (900 mi) of each other and are at tropical storm strength or stronger. 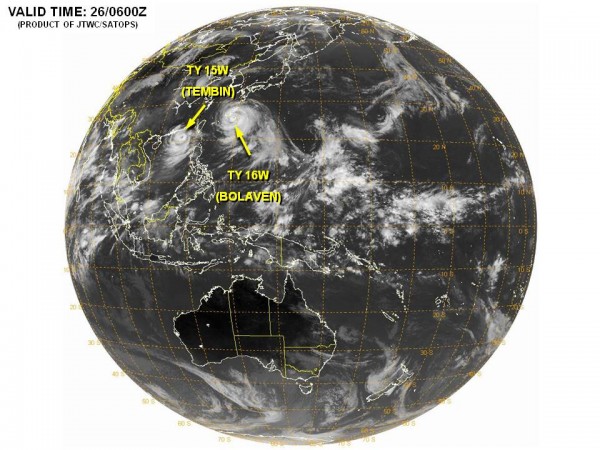 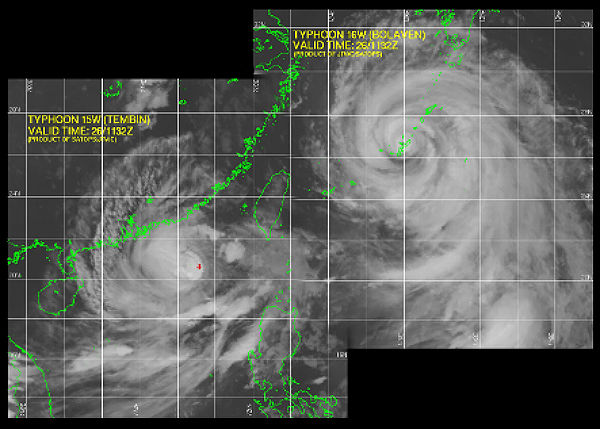