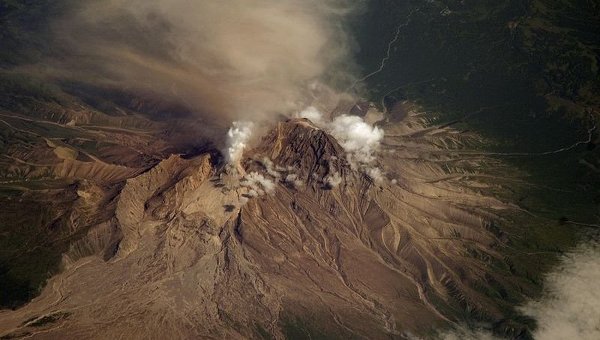 Russia’s northernmost active volcano Shiveluch is churning out ash to a height of 9,500 meters (over 31,000 feet) in the country’s Far East, local scientists reported on Tuesday, April 17, 2012.

The 3,283-meter (10,771-foot) Shiveluch stratovolcano increased activity in May 2009 and has been periodically spewing ash from three to ten kilometers.

“A powerful eruption of ashes took place 05.59 a.m. local time <17:59 gmt on monday >, a source at the Far Eastern Institute of Volcanology and Seismology said.

The official said the column of ashes could be clearly seen from a distance of 40 kilometers spreading to the east.

“It is the most powerful eruption this year,” the expert said.

According to scientists, the volcanic activity over the past two-three years has significantly altered the contour of the volcano with the crater increasing in size by 50% and the slopes becoming far steeper than before.

Although the current eruption poses no immediate threat to nearby settlements, the ensuing ash fallouts could be hazardous to health and the environment.

The clouds of volcanic ash could also pose threat to air traffic because the tiny particles cause problems with aircraft engine turbines.

So far, local authorities issued no warnings to air traffic in the area.

There are more than 150 volcanoes on Kamchatka, 29 of them active.

The high, isolated massif of Shiveluch volcano (also spelled Sheveluch) rises above the lowlands NNE of the Kliuchevskaya volcano group. The 1300 cu km Shiveluch is one of Kamchatka’s largest and most active volcanic structures. The summit of roughly 65,000-year-old Stary Shiveluch is truncated by a broad 9-km-wide late-Pleistocene caldera breached to the south. Many lava domes dot its outer flanks.

The Molodoy Shiveluch lava dome complex was constructed during the Holocene within the large horseshoe-shaped caldera; Holocene lava dome extrusion also took place on the flanks of Stary Shiveluch.

At least 60 large eruptions of Shiveluch have occurred during the Holocene, making it the most vigorous andesitic volcano of the Kuril-Kamchatka arc. Widespread tephra layers from these eruptions have provided valuable time markers for dating volcanic events in Kamchatka.