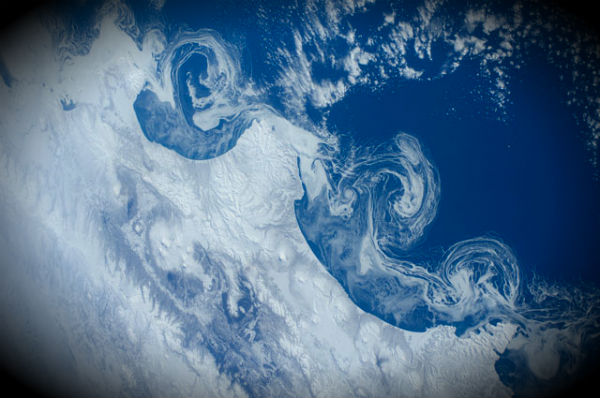 The irregular southeastern coastline of Kamchatka provokes large, circular eddy currents to spin off from the main southwestward-flowing Kamchatka current. Three such eddies are observed by the International Space Station (ISS)  as the winter season blankets the Kamchatka Peninsula of Russia in snow. Significant amounts of sea ice can also form and collect along the Pacific coastline. As ice floes grind against each other, they produce smaller floes that can be moved by wind and currents.

Ice floes are frozen masses of seawater (saltwater) that float on the surface of the sea. The term is applied to any relatively flat piece of sea ice that is free moving – unlike pack ice. The tracking of ice floes is important to both understanding critical environmental issues such as global warming, and to aid in navigation. The patterns are very difficult and dangerous to navigate in an ocean vessel. It is also the most dynamic and dangerous place to be in the spring, and each year, unsuspecting people are set adrift as the ice fractures and large ice floes float out to sea. This often happens in weather conditions that make air searches and rescue efforts difficult or impossible.

While the floes may look thin and delicate from the ISS vantage point, even the smaller ice chunks are several meters across. White clouds seen at image on top right are distinguished from the sea ice and snow cover by their high brightness and discontinuous nature. 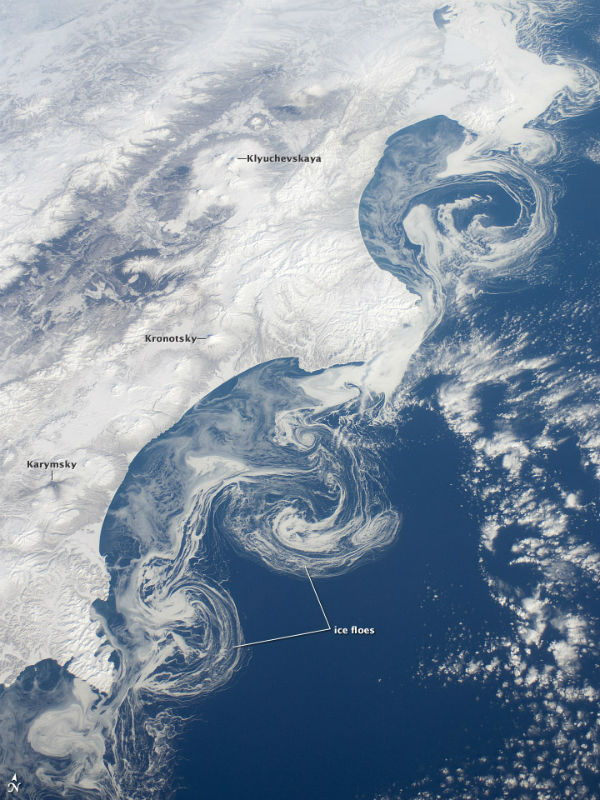 The Kamchatka Peninsula also hosts many currently and historically active stratovolcanoes. Kliuchevskoi Volcano, the highest in Kamchatka (summit elevation 4,835 meters) and one of the most active, had its most recent confirmed eruption in June 2011. Meanwhile, Karymsky Volcano (to the south) likely produced ash plumes just days before this image was taken; the snow cover on the south and east sides of the summit is darkened by a cover of fresh ash or melted away altogether (image bottom center). By contrast, Kronotsky Volcano—a “textbook” symmetrical cone-shaped stratovolcano—last erupted in 1923. (The Gateway to Astronaut Photography of Earth/EOL JSC NASA)

Additional images taken by astronauts and cosmonauts can be viewed at the NASA/JSC Gateway to Astronaut Photography of Earth.

Astronaut photograph ISS030-E-162344 was acquired on March 15, 2012, with a Nikon D2Xs digital camera using a 28 mm lens, and is provided by the ISS Crew Earth Observations experiment and Image Science & Analysis Laboratory, Johnson Space Center. The image was taken by the Expedition 30 crew. The image has been cropped and enhanced to improve contrast, and lens artifacts have been removed. The International Space Station Program supports the laboratory as part of the ISS National Lab to help astronauts take pictures of Earth that will be of the greatest value to scientists and the public, and to make those images freely available on the Internet.