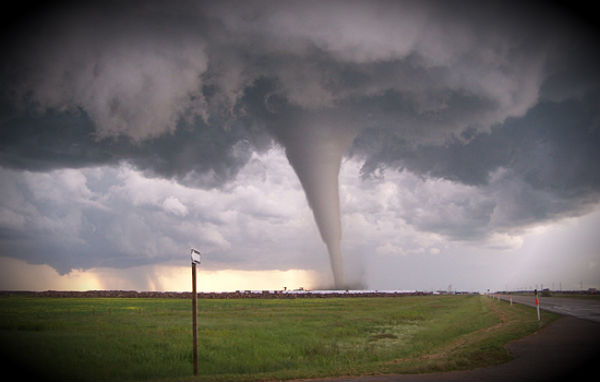 Severe thunderstorms are heating up on the central and southern Plains, producing the threats of damaging winds, large hail and tornadoes. A line of thunderstorms is stretching from the Dallas and Fort Worth area and extending to communities south and west of San Antonio, Texas. Some of storms are severe with indications of strong rotation on radar.

This is a serious storm threat, and you should take cover immediately if a severe storm or tornado-related warning is issued for your area. Keep weather radios on for severe weather and flooding alerts.

The National Weather Service Storm Prediction Center in Norman, OK, is forecasting the development of tornadoes, large hail and damaging winds over parts of the southern Plains. The areas most likely to experience this activity include extreme western Arkansas, southeastern Oklahoma and central and northeastern Texas. Severe storms are possible from south Texas northward to the eastern Dakotas and western Minnesota.

A large upper-level storm system over the Rockies will drift eastward toward the Great Plains through tonight. A very moist and unstable environment is present to the east of ongoing thunderstorms along the I-44 corridor in Oklahoma and northwest Texas. These storms are expected to intensify later this afternoon across north Texas and southeast Oklahoma where the strongest wind are capable of producing few tornadoes.

Flash flooding will continue to be a major concern as communities are hit with multiple downpours. Cities that could be left damaged from the powerful thunderstorms or tornadoes include Waco and Tyler, Texas, McAlester, Muskogee and Tulsa, Okla., Springfield, Mo., and Fayetteville, Ark. Thunderstorms will also intensify farther north across portions of Iowa, the eastern Dakotas and southern Minnesota. A few storms will become strong or severe farther east across the Ohio Valley and the Carolinas as well. Hail and strong winds will be the biggest threats of these storms.

Flooding rain has been pouring down with the thunderstorms hammering Oklahoma, from Oklahoma City to Tulsa. Officials have been forced to close roads as a result of flooding.

>>>For live updates on the severe storms and flooding unfolding on the Plains, click here.