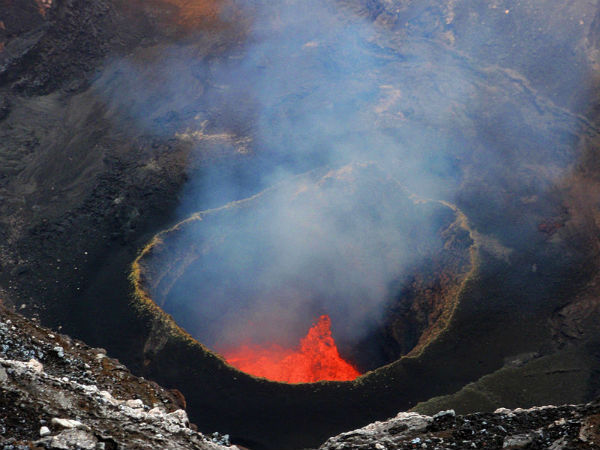 The emerald green islands of Vanuatu were marked by volcanic activity December 27, 2011. Large thermal anomalies were created by the expulsion of lava and hot volcanic gas from erupting volcanos. A wide volcanic plume can be seen blowing from the Ambrym volcano southeast across the South Pacific Ocean.

Ambrym is one of the most active volcanoes in the world, and has been erupting almost continuously since 2009. The volcanic island sits near the center of the archipelago of Vanuatu, and is roughly triangular in shape. The caldera of the volcano lies near the center of the island, and its wide, dry expanse contains an ash plain as well as numerous eroded gullies, active craters and recent lava flows. In the 250 m image, the tan caldera can clearly be seen. The thermal anomaly may rise from the site of a lava lake, a common feature on the island. 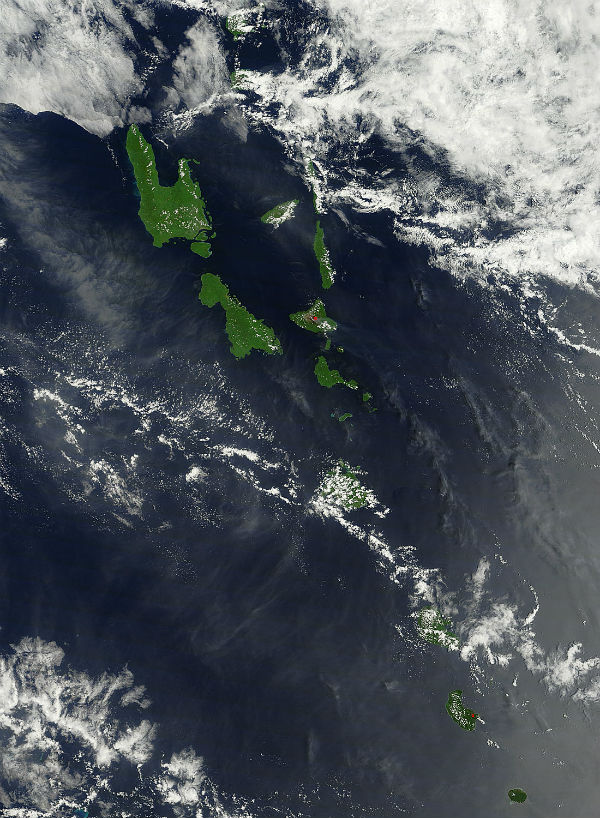 Ambrym is a large basaltic volcano with a 12-km-wide caldera, and one of the most active volcanoes of the New Hebrides volcanic arc. The caldera is the result of a huge plinian explosion, which took place around 50 AD. Its explosive force is rated 6, the second highest in the Smithsonian Institution’s Volcanic Explosivity Index ranks of the largest volcanic explosions in recent geological history. The massive, 1900-year-old, 12 kilometres (7.5 mi) × 8 kilometres (5.0 mi) caldera is the site of two active volcanic cones, Benbow and Marum(also spelled Maroum). Several times per century, Ambrym volcano had destructive eruptions.

To the south, Yasur volcano sits on Tanna Island, near the coast of Sulphur Bay. It is also one of the world’s most active volcanoes, erupting nearly continuously for over 800 years – sometimes as often as several times an hour. The activity is normally relatively low-level, but the frequent strombolian eruptions can fling incandescent cinder, lapilli and lava bombs tens to hundreds of meters in the air.