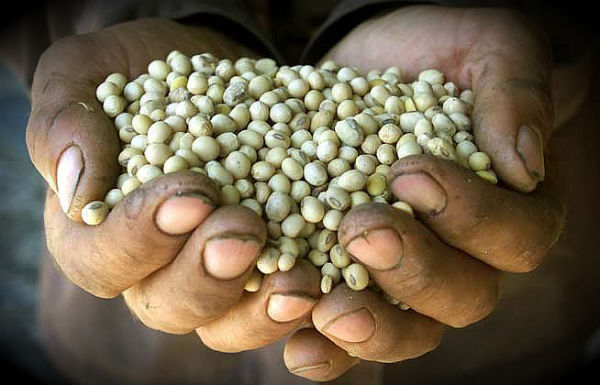 More people are expected to go hungry in 2012.  New FAO chief says food prices may ease but won’t drop in 2012. Slowing global economy is responsible for easing up the prices of some foods  but are unlikely to drop drastically from the high levels reached last year, the new director-general of the U.N.’s Food and Agriculture Organisation said on Tuesday. Global food prices measured by the FAO hit a peak last February but have been falling since June as crops have improved and concerns about global economic turmoil have reined in demand growth. High food prices have helped fuel inflation and contributed to the civil unrest which created the so-called Arab Spring last year. 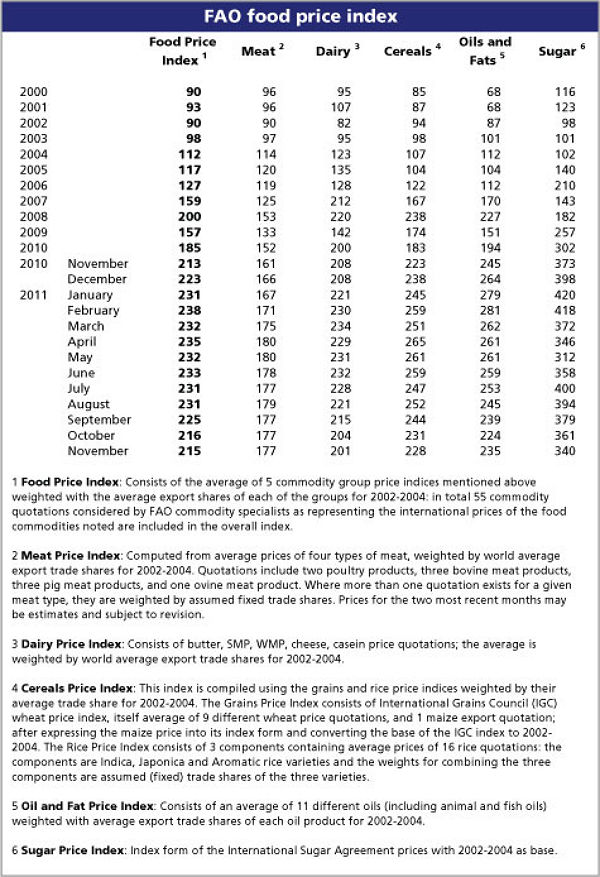 Jose Graziano da Silva, the Brazilian who replaced Senegal’s Jacques Diouf at the helm of the FAO at the start of 2012, said volatility in food markets was likely to continue and that more people would be at risk of hunger due to economic instability. He stated that prices will not be going up as in the last two to three years but will also not drop down. There may be some reductions but not so drastic, in the short term but volatility will remain.

Slowdown was likely to increase the number of people at risk of hunger in the world, which the organisation estimated at 925 million people in 2010. At Horn of Africa  drought and famine are affecting millions of people. (AlertNet)

By causing poor health, low levels of energy, and even mental impairment, hunger can lead to even greater poverty by reducing people’s ability to work and learn, thus leading to even greater hunger. 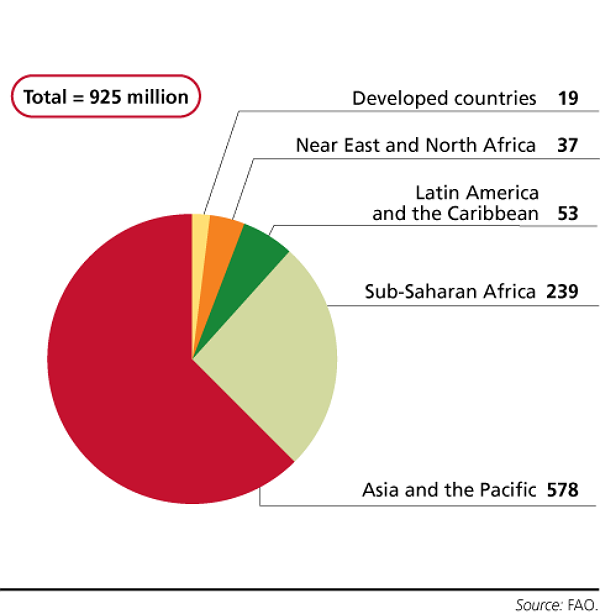 Growing demand for biofuels, extreme weather and climate change, and increased financial activity through commodity futures markets are the main causes of high and volatile food prices, according to the 2011 Global Hunger Index report, The Challenge of Hunger: Taming Price Spikes and Excessive Food Price Volatility.  These challenges are exacerbated by historically low levels of grain reserves, export markets for staple commodities that are highly concentrated in a few countries, and lack of timely, accurate information on food production, stock levels, and price forecasting, which can lead to overreaction by policymakers and soaring prices. (IFPRI)

The world produces enough food to feed everyone. World agriculture produces 17 percent more calories per person today than it did 30 years ago, despite a 70 percent population increase. This is enough to provide everyone in the world with at least 2,720 kilocalories (kcal) per person per day  according to the most recent estimate that we could find.  The principal problem is that many people in the world do not have sufficient land to grow, or income to purchase, enough food.

“The State of Food Insecurity in the World 2011”

“Was the Global Food Crisis Really a Crisis? Simulations versus Self-Reporting”

Harmful economic systems are the principal cause of poverty and hunger. The principal underlying cause of poverty and hunger is the ordinary operation of the economic and political systems in the world. Essentially control over resources and income is based on military, political and economic power that typically ends up in the hands of a minority, who live well, while those at the bottom barely survive, if they do. Climate change is increasingly viewed as a current and future cause of hunger and poverty. Increasing drought, flooding, and changing climatic patterns requiring a shift in crops and farming practices that may not be easily accomplished are three key issues. (WorldHunger)