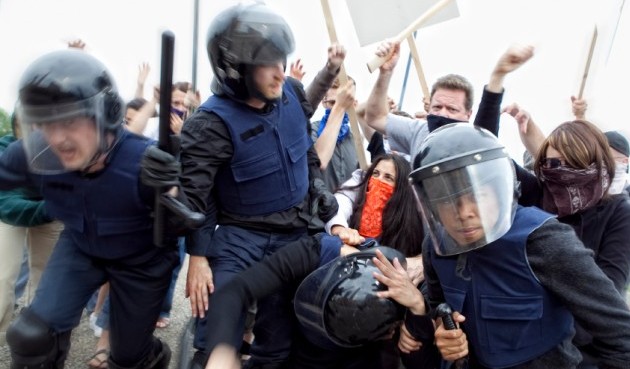 The social contract of peace and compliance only exists in any country so long as society is civil enough to permit it, government policies notwithstanding. So it is with some apprehension that sociologists and demographers are watching vulnerable populations in the United States for any signs of unrest as food prices — and in particular, meat prices — continue to rise.

A recent blog post in the Scientific American discusses the trend of increasing social unrest in countries around the world, noting that, in 2014 alone, riots in the countries of both Venezuela and Thailand have been tied to the issue of increasing food prices.

"According to Dr. Yaneer Bar-Yam and fellow researchers at the New England Complex Systems Institute (NECSI), events such as these may be anticipated by a mathematical model that examines rising food costs," the Scientific American (SA) reported.

Historically, unrest has been tied to hunger

The events this year are not without precedent; hunger is a huge destabilizing factor for any society. In Imperial Rome, for instance, Emperor Augustus introduced grain subsidies to placate hunger-induced unrest.

In more recent years, the Middle East has been affected in particular by the rising cost of grain. Hundreds of years after the Egyptians developed bread as we now know it, the country experienced a sort of "bread intifada," as the SA reports: "the country rioted for two days in January 1977 following Anwar Sadat's decision to drastically decrease food subsidies."

Back home in America, the "land of plenty" so to speak, millions of our own citizens are going without enough food to eat (even as we subsidize food and send food to nations around the world).

As reported by USA Today, a new report from a hunger-relief charity, Feeding America, notes that "based on 2012 federal survey data on 44,000 households, says 49 million Americans are 'food insecure' — people who sometimes eat less, go hungry or eat less nutritious meals because they can't afford to eat better. Almost a third of them are children," the paper said.

According to the Economic Collapse Blog, "in 1854, Henry David Thoreau observed that 'the mass of men lead lives of quiet desperation'. The same could be said of our time."

Something fundamentally unnerving about hunger

Every day, the blog notes, tens of millions of Americans eke out an existence, "quietly scratching and clawing their way from month to month." And why wouldn't they be? According to the Labor Department's Bureau of Labor Statistics, the vast majority of workers in private-sector employment make $35,000 a year or less, and that's before all of the taxes Americans are forced to pay.

But there are other factors besides rising food costs that experts and historians agree can lead to instability within a country. Unemployment (or in the case of the United State, chronic underemployment), political oppression (which has gotten worse and worse in the U.S. over the past 50 years especially), economic instability (think of another economic collapse like the one which triggered the recent "Great Recession") and political corruption (think of the various and growing scandals within the current administration).

That said, experts note, there is something fundamentally unnerving about a lack of food — the inability to either obtain it or gain access to it.

As Bar-Yam explains, "The analysis suggests the doubling of food prices we have seen since 2005 pushed many in the greatest poverty across the line from bare subsistence into desperation and starvation. When people are not able to feed their families, they have little to lose and become willing to take strong actions."